Before Impeaching Trump, Why Not Take a Few Steps Back?

John Kass
|
Posted: May 18, 2017 12:01 AM
Share   Tweet
The opinions expressed by columnists are their own and do not necessarily represent the views of Townhall.com. 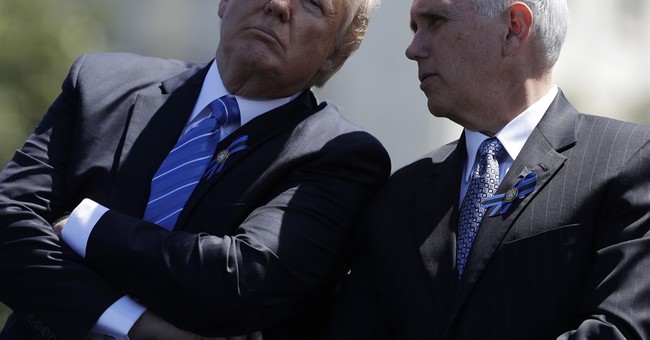 Are you ready for President Mike Pence?

There's enough out there now about President Donald Trump that mentioning a President Pence isn't all that unreasonable.

There's a drumbeat now, sending tingles up and down Democratic legs -- and Republican Never-Trumper legs -- and other sensations through America's turgid Twitter thumbs.

The New York Times is all but accusing Trump of obstruction of justice in the FBI investigation of former National Security Adviser Michael Flynn, with Democrats calling for impeachment proceedings.

The Washington Post has tagged Trump at best a bumbler, impulsively dishing out classified information on ISIS to the Russians.

Trump's credibility is in tatters just as he planned to make his first foreign trip, and now Washington is a hot mess, amplified by the social media echo chamber and the ravenous appetites of cable news.

Given Trump's animosity toward the Washington establishment, and their absolute loathing of Trump and his working-class voters, there's also the smell of blood on the floor.

But with all the shrieking and screaming, and partisan dancing, I'd like to suggest something:

Get yourself a pocket copy of the Constitution and hold on.

It might be comforting to blow it all off as partisan politics, or run with your partisan pack and howl at the orange moon. Politics is at play, yes, and agendas are everywhere, and hypocrisy is the water of life in Washington, but these are serious stories that are draped across Trump's neck.

Allegations of obstruction of justice are serious, and compulsively giving up classified intelligence is also quite serious. And they deserve your serious consideration.

But whether you voted for him or you hate him, and tens of millions of Americans did one or the other in November, remember this about the president.

Trump won't be hanged by the morning.

Still, The New York Times story about former FBI Director James Comey and Trump is the kind of thing that bleeds an administration dry.

The Times, through sources, reports on a memo Comey apparently wrote before Trump fired him, about a conversation he had with the president in the Oval Office in February.

It was about Michael Flynn, Trump's national security adviser, who is under investigation by the FBI.

There's only one thing wrong with the story far as I can tell. The New York Times didn't print a copy of the Comey memo.

It has sources who read the memo. These could be other FBI agents or Comey himself, or his lawyers. And given it comes out of Washington, is it possible there could be a political agenda here?

We really don't know what Comey said or wrote or thought. We know the Trump White House denies it all. But that's today. The president might tweet out something else in the morning.

You can make the beginnings of an obstruction of justice case with that one. Trump helped the Democratic narrative with his recent interview with NBC about his decision to fire Comey.

"Regardless of recommendation I was going to fire Comey, knowing, there was no good time to do it," Trump told NBC. "And in fact when I decided to just do it, I said to myself, I said you know, this Russia thing with Trump and Russia is a made-up story. It's an excuse by the Democrats for having lost an election that they should have won."

The Russians didn't cost Hillary Clinton the election. Hillary was doomed months before any alleged Russian interference or hacking of Democratic email.

She was the establishment candidate in the year of insurgency, and the Democrats, the party of the state, still can't deal with it.

"The White House said it didn't happen and I think they need to come forward with whatever evidence they have," said Sen. Angus King, of Maine, an independent who caucuses with the Democrats.

"If it's a tape, now's the time," King told CNN. "If it's contemporaneous notes, if there was someone else in the room that took notes, if the president wrote a memo afterward about what was said in that meeting, we need to have that before us."

He's absolutely correct. But my guess is that Trump doesn't write memos after he leverages somebody to do what he wants done. It's all muscle with him.

And memos are a Washington thing, something that clerks and lawyers do to cover their flanks. And apparently, Comey's flanks are covered, but until we actually read the memo, until Comey testifies under oath as to the nature of their conversation, we just don't know.

"There's a reason why newspaper articles are not admissible in any courtroom in the United States, Republican U.S. Rep. Trey Gowdy said on Fox News. "I'm not knocking the reporter. The reporter does good work. But we're a long ways from a conviction, the fact that we simply have a headline in The New York Times."

Comey will, and should, testify before Congress. And every American should be able to read the memo and hear his testimony.

But headlines do have a way of driving a herd, don't they?