John Kass
|
Posted: Mar 09, 2017 12:00 AM
Share   Tweet
The opinions expressed by columnists are their own and do not necessarily represent the views of Townhall.com. 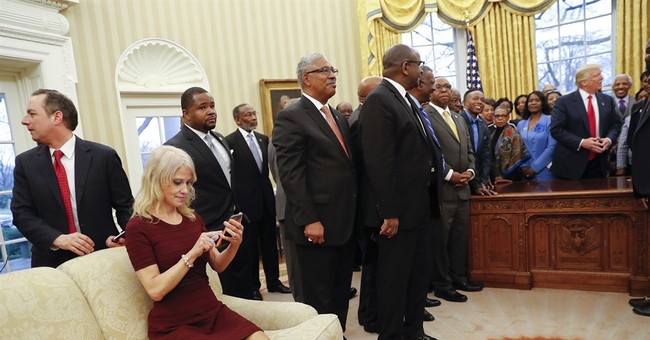 When is it acceptable in America for a woman to be the subject of a disgusting, sexist joke offered by a man making a public speech in Washington?

When she's a Republican.

And when he's a Democrat.

The laughter is the lash of a whip, a lesson to every woman -- and every independent-minded girl -- who dares think about straying from liberal Democratic group-think.

And then came Nancy Pelosi, to complete the final lesson on political fealty. Pelosi, Democrat and feminist, taught her lesson while appearing on CNN's "State of the Union" with Jake Tapper.

Tapper asked her about vulgar comments made by her fellow Democrat, U.S. Rep. Cedric Richmond of Louisiana. Richmond's target was Kellyanne Conway, adviser to President Donald Trump. Conway had been kneeling on a couch in the Oval Office to take a photo of Trump surrounded by African-American college and university leaders. A photo of Conway on the couch hit Twitter, and the twittersphere went crazy.

The left loved the photo, because it distracted from the Trump/black leaders photo op. And they loved it because they could mock her for kneeling on the couch.

But a few days later, the topic came up at a formal political dinner by the Washington Press Club Foundation. Sen. Tim Scott, R-SC., spoke first and made a joke that the Oval Office couch had seen worse things in the 1990s, referring to Democratic President Bill Clinton's sex scandal.

Richmond, who spoke next, went even further. He took the greasy thumbs of Twitter. And he put them in his mouth.

He compared Conway to Monica Lewinsky, the White House intern who had sexual relations with Clinton in the Oval Office in the 1990s. He said Conway was in a "familiar" pose.

"What was going on there, I won't tell anybody," Richmond said to Scott. "And you can just explain to me that circumstance, because she really looked kind of familiar in that position. Don't answer, and I don't want you to refer back to the '90s."

Familiar in the position?

Do you understand, girls?

"Leader Pelosi, the joke was sexist, it was disgusting. Shouldn't the congressman apologize to Kellyanne Conway?" Tapper asked. "And, honestly, where is the Democratic Party in expressing outrage about this?"

Pelosi said she wasn't at the dinner but quickly noted Trump had said extremely crude things about women in a private conversation gone public on that infamous "Access Hollywood" video that was released before the election.

"You all are criticizing Cedric for something he said in the course of the evening -- and he maybe should be criticized for that, I just don't know the particulars," said Pelosi. "But I do, every day, marvel at the fact that somebody who said the gross and crude things that President Trump said -- he wouldn't even be allowed in a frat house, and he's in the White House."

Trump's statements about women were more than disgusting, and almost cost him the election.

And in her avoidance, Pelosi slammed her lesson home, a lesson to women about what happens in the real political world to women when they don't cleave to the liberal line.

"Well, I think everybody was making crude comments," Pelosi said, "and I just don't know, I wasn't at that dinner. ... I'll look at what my colleague said there, but I do think that in the Oval Office we were always, always with decorum appropriate for the White House."

Later, Richmond offered one of those Washington political lickspittle apologies. It wasn't a real apology where someone says they were wrong and they are sorry. This was the kind that expresses regret for how remarks were interpreted. So if you're offended, it's on you.

"After a discussion with people I know and trust I understand the way my remarks have been received by many," Richmond said in a statement. "I have consistently been a champion for women and women's issues, and because of that the last thing I would want to ever do is utter words that would hurt or demean them. I apologize to Kellyanne Conway and everyone who has found my comments to be offensive."

But just imagine if a Republican congressman said something like that about a Democratic woman. Pelosi would have much to say. And so would organizers of women's marches and anti-Trump women's political theater.

A Republican man saying that sort of thing about a Democratic woman would make headlines for days and days. And those who declined to condemn it would be shamed.

Comparing Conway to Lewinsky was intentional. And like Tapper said, disgusting.

In this, it is very much like attacks on conservative African-American men, who are demeaned as Uncle Toms.

There was not much in the way of official Democratic condemnation of Richmond. And little public outrage in the media.

But what if you're a woman and you don't buy the liberal Democratic politics?

You shall be shamed.

First comes the mockery that stings like a whip, like a scarlet letter, followed by a relative, partisan silence and a media silence.

People understand this, particularly the young, who fear shaming.

And it teaches a much more profound lesson to young conservative women about political fealty than do liberal marches and women's strikes and public theater.

What does it say?

It says kneel and pledge fealty, or be shamed.

That's what it says.