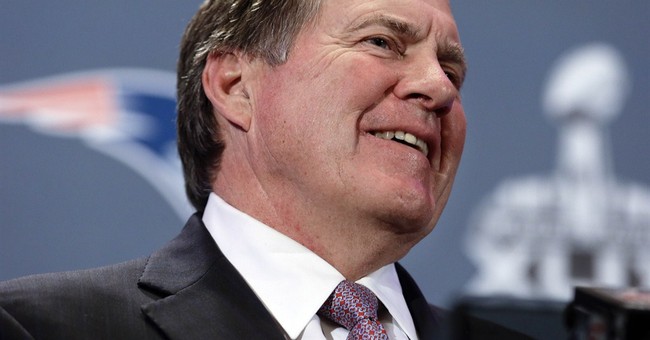 My fellow Americans, these are the words that all true patriots must shout during Super Bowl week so that we may slap down the Great Insult of the Deflated Footballs.

As you must know by now -- and if you don't know then you're probably dead so perfume yourself -- the New England Patriots and their quarterback Brady and coach Belichick have been accused of an incredibly cynical crime:

Deflating footballs to give Brady a better grip so his Patriots could get to Super Bowl XLIX and face the Seattle Seahawks in the upcoming game of all games.

And because of the deflation of footballs, we're not getting our full Super Bowl media treatment. Usually we're assaulted with endless jargon like, "He's great at the three technique."

And the food media slam us with endless ways to make tasteless gringo chili (with the cheese and dollops of sour cream) and pretend that eating gringo chili at halftime is a Super Bowl tradition, which it isn't.

Cheese breads aren't a Super Bowl tradition, either. And that goes double for wraps. And don't start me on the "tradition" of Super Bowl brownies, which is, I submit, another bald-faced lie.

The cover-up is always worse than the crime? Just imagine if the media started whipping up people over violations of the Constitution, which happen, oh, about every 30 seconds in Washington.
CARTOONS | Gary Varvel
View Cartoon

But that's just about freedom, how we're governed and the future of a republic that allows tax breaks so NFL owners can build stadiums and feed the sports media lousy chili.

Did Brady do it? He suggests he probably didn't.

But so what if he did?

Perhaps he has tiny hands and requires a soft ball to get a better grip. Or it could be that Brady's fingers have weakened with age.

Nothing has been proved! Nothing.

All we know is that the Brady haters in the sports media -- and they are legion -- just can't wait to tear down a guy with many championship rings, millions of dollars, a great team around him, a hot wife and some of his own hair.

These are words defiant and brave. Just imagine thousands of us marching together, raising deflated balls in our hands, raising them high, and shouting against the sports-naysayers with a new battle cry:

In English, I think it means -- at least according to the Google translator -- "I do not like deflated balls!"

And after all this hype about what Brady and Belichick did with the balls, you know what's going to happen, don't you?

They'll serve up a head.

Or rather, the Brady-hating sports media will be given a head, and they might as well stick it up on the walls of ESPN, kind of like what they did to the honorable Ned Stark on "Game of Thrones"

Not Brady's head. Not Belichick's head.

But the head of some nondescript ball boy for the New England Patriots.

The silver NFL plate upon which said head will rest has no doubt been polished to a gleam. His ears will be checked for unsightly hairs. (Note to NFL Ball Boy Ear Hair Committee: I once got a haircut in Istanbul from a friendly Turkish barber who used flame to singe ear hairs. Might be a good idea to call Istanbul.)

The NFL is very thorough when it comes to marketing and making sure American behinds are in the proper place, in front of the TV, when those Super Bowl commercials come on.

Only weeks ago, the NFL story involved running backs either knocking their fiancees out with one punch or whipping their children with sticks. And now we're consumed by deflated balls.

The NFL head loppers are probably wondering whether the as-yet-unidentified ball boy's head should be nestled on a bed of parsley or some other greens.

You might think that cruel, but Betty, like every other woman in America, thinks Tom Brady is cute and is not to be punished.

Speaking of heads, I once made a great Super Bowl goat's head soup -- it was actually just plain baby goat soup, but there was a goat's head floating around in the giant cauldron.

It sure was tasty. Lemony, clear with a bit of rice and spices. A clean honest goat broth of a soup, perfect for Super Bowl and better than gringo chili.