'Obama: Like a Boss' -- Bumper Sticker for a True Chicagoan 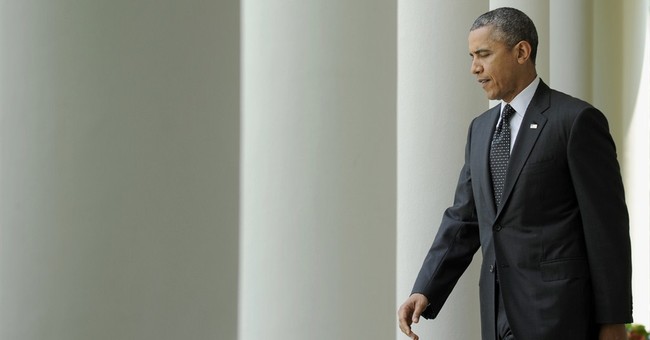 The Democrats have it all wrong when it comes to one of their choices for a new President Barack Obama bumper sticker:

The Democrats foolishly think the phrase derives from an old rap song denoting cool competence. "Like a bowse" is how the young people pronounce it.

But I have no intentions of kicking anything, except perhaps some Republicans, since they have it all wrong too.

Some are suggesting "boss" is a poor choice of words because it's the root of "bossy," the use of which is a modern-day thought crime much loathed by supporters of Hillary Clinton.

Others are mocking Obama by offering their own version of the bumper sticker slogan. One version uses a photo of the president in his mommy jeans and White Sox jacket, tossing out the first pitch at a baseball game, leading with his elbow and throwing, well, definitely not like a boss.

A few, though, asked pertinent questions about the Obama "Like a Boss" meme.

"'Like a boss'? What does that mean?" wrote lawyer John Hinderaker, a founder of the conservative Power Line blog. "Are they saying Obama is like a boss, i.e. your supervisor at work? That is not exactly how the Founders conceived of the presidency, to put it mildly."

Perhaps, but here's the thing about the Founders: They didn't learn their politics in Chicago.

And Chicago, where Obama was (politically) born, is where bosses come from. It is the land of bosses.

We've been ruled by bosses for almost a century. We've been bossed by politicians and criminals, vicious, ham-fisted men who use government to bend the people to their will.

Sometimes the boss is hardly known, a wizened old man who sits in a restaurant booth in the Viagra Triangle. Other times, the boss is out front, leading a parade.

That's why I'm so eager to get my hands on an Obama "Like a Boss" bumper sticker. That slogan is the least boring of six options offered in an online survey by the Democratic National Committee.

I want my own copy so badly that I'm offering right now to cut off the tip of my left pinkie finger, wrap it up in a handkerchief the Yakuza way, touch it to my forehead and give it to the new boss of Chicago, Mayor Rahm Emanuel.

And he'll hand my bloody little pinkie stub to his buddy, David Axelrod, the chief metaphor specialist for Obama.

When Axelrod opens up the handkerchief, and sees my flesh in there, a puckered but silent testament to my support for "Like a Boss," he'll know what to do.

But is Obama truly a boss, the Chicago Way?

He's president, and he's cool, and he sings bits of Al Green songs to Michelle in public, and watches all the SportsCenter highlights he wants, either before or after he's killed enemies with drone strikes.

But does that make him a boss?

Chicago has had many, but so have other towns. "Boss" Tweed, for example, was a true boss in New York.

Boss Daley was once our boss -- such a boss that Mike Royko's book about him was titled "Boss." Richard J. Daley could even wear a peaked Shriners' fez, the tassel hanging past his face, and still everyone, including the Kennedys, knew he was the boss.

His son, Richard M. Daley, was also a boss. For decades, even as he spent the city into fiscal oblivion, Daley the Younger had his behind continually smooched by fine corporate citizens who now complain that the city is all but broke.

Joseph "the Clown" Lombardo, now spending the end of his days in prison on charges he conspired to kill the Spilotro brothers, was street boss of the Chicago Outfit.

Though a dangerous man, he also had a bizarre and rather frightening sense of humor. Once he took out a classified ad in local newspapers insisting he was not a boss:

"I never took a secret oath, with guns and daggers, pricked my finger, drew blood or burned paper to join a criminal organization. If anyone hears my name used in connection with any criminal activity, please notify the FBI, local police, and my parole officer, Ron Kumke."

Another boss that went away to "college" with Lombardo is Jimmy Marcello.

During Marcello's federal trial, his lawyers argued that he wasn't really a boss, since his mother was Irish. They even fixed a green shamrock on a chart next to his name for the jury to see. It looked like candy from a Lucky Charms cereal box. And it didn't work magic.

Other Illinois bosses, legitimate and illegitimate, have spent years tempering ruthlessness and ambition with experience. But for Obama, it all happened so quickly.

Now he's got one thumb on the drones and the other on the Oval Office TV remote control watching "Plays of the Week" on ESPN.