Donald Trump Has Caused The Left to Lose Its Mind

John Hawkins
|
Posted: Feb 11, 2017 12:01 AM
Share   Tweet
The opinions expressed by columnists are their own and do not necessarily represent the views of Townhall.com. 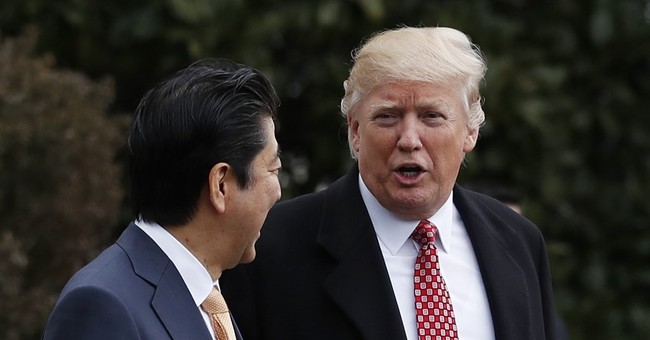 “You’re awake by the way. You’re not having a terrible, terrible dream. Also, you’re not dead and you haven’t gone to hell. This is your life now. This is our election now. This is us. This is our country.” – Rachel Maddow’s reaction to Trump becoming President

When Barack Obama was elected, conservatives didn’t cry like the liberals you see in this HILARIOUS VIDEO. We didn’t need therapy. We didn’t start wailing that he was Hitler or demand safe spaces. Instead, we said, “That sucks. This guy is going to be terrible for the country.” By the way, we were right. He was. But still, we got up and we went to work. Then when the time came, we went to Tea Parties. We obeyed the law at those Tea Parties. We paid for our permits. We were polite to the police. We cleaned up behind ourselves. Then we organized and we took control of the House and the Senate along with the majority of state legislatures and governorships. That’s how it’s supposed to work.

What we didn’t do was put on masks and riot in D.C. because we didn’t like the candidate who was elected. What we didn’t do was tear up Berkeley because we were upset that a pro-Trump gay guy was invited to give a speech. We didn’t smash any windows at Starbucks. We didn’t squirt pepper spray in people’s faces because they wore hats we didn’t like. If we had done that, Townhall and Right Wing News wouldn’t have written columns talking up the riots like the UC Berkeley student paper did. The rationale was that having people say things students don’t like on their campus is the same as committing violence against them and therefore, their violent outbursts represented “self-defense” against fascism…or something. It’s a little hard to follow the reasoning of crazy people sometimes, but as Phil Massey said, “They're trying to fight imagined fascism with actual fascism.”

This gets even trickier to figure out since former Clinton Labor Secretary Robert Reich said on TV that he heard rumors that the violent protesters were actually Breitbart plants: "There’s rumors that they actually were right-wingers. They were a part of a kind of group that was organized and ready to create the kind of tumult and danger you saw that forced the police to cancel the event. So Donald Trump, when he says Berkeley doesn’t respect free speech rights, that’s a complete distortion of the truth. ...I saw these people. They all looked very– almost paramilitary. They were not from the campus. I don’t want to say factually, but I’ve heard there was some relationship here between these people and the right-wing movement that is affiliated with Breitbart News.”

You think that’s crazy? Just yesterday, liberal protesters blocked a schoolhouse door to keep Education Secretary Betsy DeVos from being able to go in. Setting aside the fact that the last time Democrats blocked people from entering schoolhouse doors in the sixties was not exactly a proud moment for them, it’s amazing to see a DNC official siding with thugs blocking the Education Secretary from entering a building.

As you can imagine, if the “responsible people” in the Democratic Party are behaving like loons, the left-wing celebrities who are not the most stable people to begin with, are really off the rails. We could do a whole article just on the celebrity comments since Trump was elected, but here’s a little smattering of their comments that should give you a good handle on the level of crazy.

"So I’ve been shopping around for a new religion to see me through the next four years. Too many of my fellow Christians voted for selfishness and for degradation of the beautiful world God created. I guess they figured that by the time the planet was a smoky wasteland, they’d be nice and comfy in heaven, so wotthehell. Anyhow, I’m looking around for other options." -- Garrison Keillor

"I’m angry. Yes, I am outraged. Yes, I have thought an awful lot about blowing up the White House. But I know that this won’t change anything." --

“I FULLY SUPPORT IMPOSING MARTIAL LAW – DELAYING THE INAUGURATION – UNTIL TRUMP IS 'CLEARED' OF ALL CHARGES," -- Rosie O'Donnell

"WAKE UP & JOIN THE RESISTANCE. ONCE THE MILITARY IS W US FASCISTS GET OVERTHROWN. MAD KING & HIS HANDLERS GO BYE BYE" -- Sarah Silverman

Oh, well, that all sounds like a perfectly sane reaction to your candidate losing an election, doesn’t it? Oh wait, it doesn’t at all. These people sound like they belong in a mental institution.

Speaking of which, officials in Seattle are cutting ties with Wells Fargo because that company is helping to finance the Trump-supported Dakota Pipeline. Using that same thinking, couldn’t conservatives stop dealing with Wells Fargo because it was helping to finance the city of Seattle? Along similar lines, liberals are boycotting companies like Neiman Marcus because they carry merchandise put out by Trump’s daughter Ivanka. Is this the new standard in America? Targeting the children of our political enemies? It has even bled down to living arrangements. Apparently, in D.C. liberals have taken to adding the equivalent of No Trump Supporters Need Apply to ads looking for roommates. Worse yet, there has been at least one case where a woman divorced her husband of 22 years because he voted for Trump. That sounds perfectly sane, doesn’t it? Of course, we also can’t forget the infamous liberal sucker punch to the face of white nationalist Richard Spencer. That was followed by liberals declaring that it was good that Spencer was punched because he’s a Nazi and, oh, by the way, everyone who disagrees with them is a Nazi. Somehow, it never seems to occur to them that it’s just as moral or immoral to punch him for his political views as it is to punch, let’s say, Elizabeth Warren or Chuck Schumer.

Even if you don’t love Trump, he does at least seem to be a few cuts above crazy people screaming about coups while they smash windows and assault random passers-by in Make America Great hats. The Left has descended so far that when you see Death to America trending on Twitter or Facebook, you have to check to see whether it's in Iran or Berkeley. If fascism, violence, hatred, crying and crazy are all liberals have to offer, they should prepare themselves for eight years of Trump.