It’s Time for Conservatives to Boycott the NFL

John Hawkins
|
Posted: Sep 24, 2016 12:01 AM
Share   Tweet
The opinions expressed by columnists are their own and do not necessarily represent the views of Townhall.com. 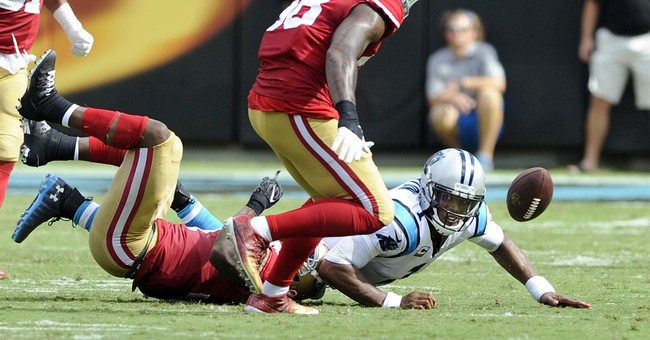 After spending a week at work, hearing about the liberalism being forced on their kids at school, having liberalism shoved in their face by their local newspaper and being harangued by TV shows portraying people like them as creeps, a lot of conservative men like to relax by watching sports. Sports is a place where politics shouldn’t even be on the agenda….but IT IS.

Now, watching a football game requires you to put up with spoiled, pampered, privileged, obscenely wealthy man-children disrespecting America during the national anthem. As if that isn’t bad enough, you turn on ESPN or somewhere else discussing sports and what do you hear? Liberals talking about how great it is that these football players are crapping all over the country that made them rich and famous.

Forget about rushing for 100 yards and throwing 4 touchdowns in a game; if you really want people to talk about you, just tell everyone about how racist America is and how awful the police are because the latest criminal who was “about to turn his life around and go to college” gets shot after doing something insanely stupid and dangerous with a cop around.

Know what the penalty for putting America down in the NFL is right now? Nothing. The same NFL that banned pro-cop helmet decals and stopped Titans linebacker Avery Williamson from wearing cleats that honored the victims of 9/11, supports players who refuse to stand for the Pledge. Moreover, spoiled mediocre quarterback Colin Kaepernick’s jersey became a best seller AFTER he held the flag in contempt. On a personal note, I wouldn’t even shake someone’s hand who is wearing a Kaepernick jersey, much less hire him. But, when people who hate America will reward you for doing the wrong thing, while the good people just shrug their shoulders, you shouldn’t be surprised when NFL players keep flipping off the whole country.

The reason they feel free to do that is because of conservatives. Let me repeat that: CONSERVATIVES are why these overgrown jackasses can continue to be unpatriotic. That’s because you’re the people who are offended by their behavior, but you won’t do anything about it. That’s the same reason conservatives have lost the schools, Hollywood, the mainstream media and it’s why the NFL is turning into a bigger, even dumber version of the Daily Kos. If liberals are going to reward you for trashing America and conservatives aren’t going to punish you for it, a certain percentage of people are going to take advantage of that. That’s just the way of the world and as we see again and again and again, it’s a slippery slope. Today it’s the NFL; tomorrow it’ll be the NBA and MLB. Next thing you know, the NFL will be making kids listen to a lecture from Al Gore before they start the NFL Punt, Pass & Kick program while the adults will be forced to watch anti-gun lectures at half time. Why wouldn’t they do that if liberals will swoon over them in the press and conservatives will keep giving them money?

You know, as a columnist, one of the things you hear all the time is, “You’re just writing about these problems. Well, big deal. What are you DOING to fix them?” Of course, then every time you try to get people to take action, you hear, “Oh, I don’t want to do THAT.” The reality is that when it comes to shaping the culture, boycotts are the single most effective tool conservatives have. At the end of the day, nobody in Hollywood or the NFL gives a damn about what’s good for the country or what offends conservatives. On the other hand, they care a great deal about their bottom line. So, A&E executives would have been perfectly happy to kick Duck Dynasty off the air…until they realized it would cost them a lot of money. Studios are happy to churn out left-wing crap like the all-female Ghostbusters movie….until the movie bombs and costs them 100 million dollars.

If the NFL loses enough viewers, you may be surprised at how quickly it starts to love America again. The good news is it has already started.

According to Austin Karp of SportsBusiness Daily, Monday night’s Eagles-Bears snooze-fest generated an overnight rating of 8.3. That’s an 11-percent drop from last year’s Week Two Monday night matchup between the Jets and the Colts, and it’s also the lowest Week Two Monday Night Football rating “since at least ’09, and likely further back.” The league has now seen an apple-to-apples ratings drop in each of the seven prime-time games this year.

If you found that encouraging, take a look at this.

A Yahoo survey says that 44 percent of Americans report a likelihood of shutting off NFL games should players continue to kneel for the national anthem.

Encourage this movement every way you can. Start by skipping the next game. Then LET PEOPLE KNOW that you’re not watching and WHY you’re not watching. Stop buying their merchandise. Trash them publicly for being unpatriotic and disrespectful to America. Hit them where it hurts, in the wallet. If you’re sick and tired of the way NFL players are behaving, that’s how you can change it. If you love football, no one’s saying it has to be forever. If the NFL does the right thing and starts putting heavy fines on players that disrespect America, feel free to tune back in. But, in the interim, if you want things to change, YOU have to be willing to change your behavior. As for me? I’m not watching a game this year, including the Super Bowl and you know what? I’m not going to miss it one iota. Not every conservative will join me in doing that, but if enough conservatives decide they’ve had it with football and turn the TV off, the NFL will change in a hurry.