The Conservative Case For Ted Cruz 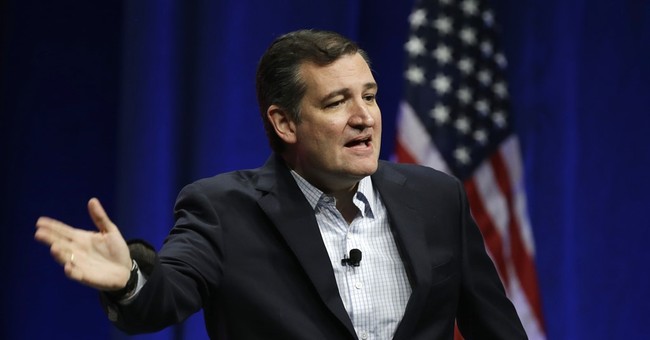 After eight years of Obama that have decimated the Democratic Party, the Dems seem poised to nominate a candidate who’s generally thought of as a corrupt, insincere liar with no significant accomplishments. This gives the Republican Party a real opportunity to put someone in the White House who can reverse the damage of the Obama years and get the country back on track.

As of today, there appear to be five candidates who are in the hunt for the nomination: Jeb Bush, Ben Carson, Ted Cruz, Marco Rubio and Donald Trump.

Out of those candidates, Ted Cruz should be an easy choice for conservatives.

Well, if you want a conservative candidate in the White House, you can’t do better than Ted Cruz. Cruz has a 100% lifetime rating from the ACU, a 97% rating from Conservative Review and a 100% rating from Heritage Action.

Even on immigration, where Donald Trump is dominating the headlines, there isn’t much difference between Trump and Cruz. Cruz says he will build the wall, deport illegal aliens and he opposes birthright citizenship. Since Cruz opposed Rubio’s amnesty and open borders plan, there’s no reason to think he doesn’t mean it. Although it’s true that Cruz has not definitely said what will happen after we do finally secure the borders, it’s worth noting that Trump hasn’t either. That’s a big part of the reason why both Trump AND Cruz get the same A- grades from the gold standard on the issue, Numbers USA.

If you want “another Reagan” in the White House, then Cruz is the closest thing you’re ever going to get.

Additionally, if Ted Cruz is the nominee, for the first time in decades, conservatives would be wildly enthusiastic about their nominee. Moreover, Cruz is a solid debater, he’s not gaffe-prone, he’s likely to pull in Hispanic voters in the mid-to-high thirties because he’d be our first Hispanic President and he’s proven to be the second best fundraiser on the Republican side behind Jeb Bush. Moreover, unlike Bush, Cruz’s donations have been roughly split between high dollar donors and the grassroots.

Furthermore, Cruz may be the only man who could unite the party. Although those in the GOP Establishment have always disliked Cruz, they despise Trump so much that the Overton Window has expanded and Cruz is now likely to be an acceptable alternative to them.

You also have to look at the other options.

Jeb Bush is an establishment candidate with no charisma, his favorable/unfavorable numbers are abysmal (29/55), his last name is a huge disadvantage in a general election and he’s widely despised by many grassroots conservatives.

The other establishment candidate, Marco Rubio, shouldn’t even be running after executing the biggest betrayal of conservatives since George H. W. Bush broke his “Read my lips, no new taxes” pledge. The big issue in the 2012 election was Obamacare and we ran Mitt Romney even though he created the precursor to it. In this election cycle, immigration is the biggest issue; so should we choose a nominee who broke his campaign promises in order to help Obama foist amnesty and open borders on America? Marco Rubio is the Benedict Arnold of illegal immigration and it makes no sense to choose him as our nominee.

Ben Carson may be incredibly likable, but he also wants to get rid of Medicare which would probably make him unelectable aside from any other concerns people have about him.

Despite the fact that it’s great to have a candidate who is as charismatic and non-politically correct as Trump, there are a number of indications that he would have trouble winning a general election.

There are a lot of Republicans, including grassroots conservatives, who will never warm up to him, his favorable/unfavorable rating is terrible (37%/55%), he’s incredibly gaffe-prone and perhaps most importantly, there is a huge issue that few people seem to be discussing. Hillary and the Super PACs supporting her are likely to spend somewhere between 3-4 billion dollars on her campaign. On the other hand, one of Trump’s biggest selling points is that he doesn’t want Super PACS or big donors giving him money. Moreover, Trump has spent very little of his own money so far and it seems EXTREMELY UNLIKELY that he would liquidate and spend 3-4 billion dollars of his personal fortune on the campaign. Even if Trump wanted to do it, it literally may not be possible. While Trump may be able to win the nomination on a shoestring by relying on non-stop cable news and talk radio interviews to power his campaign, there is ZERO chance that will work in the general election.

Additionally, it’s great that Trump’s a fighter, but Ted Cruz has been a fighter, too. No member of Congress fought harder to cut spending, defund Planned Parenthood or kill Obamacare. While Republicans like John Boehner and Lindsey Graham were laughing at the idea of trying to stop Obama from running wild, Ted Cruz was demanding that Republicans in Congress fulfill the campaign promises they made. Don’t you want someone who thinks like this as the next president of the United States?

“Part of what’s so problematic with Washington is how many Republicans want a show vote to pretend to their constituents they’re fighting for what they say they’re fighting for, rather than actually fighting for it and actually winning. In both parties, you’ve got entrenched politicians who have barely veiled contempt for the American people. They think their voters are gullible rubes – and you give them a little ‘show vote,’ you tell them, ‘Hey, I’m totally with you,’ then they go to Washington and they don’t actually do what they say.”

If you want an electable candidate who will help the GOP with Hispanics, kill Obamacare, handle illegal immigration, move the country to the Right and fight for the principles conservatives stand for, you cannot do any better than Ted Cruz.