Joe Biden: The Great White Dope of the Democrat Party 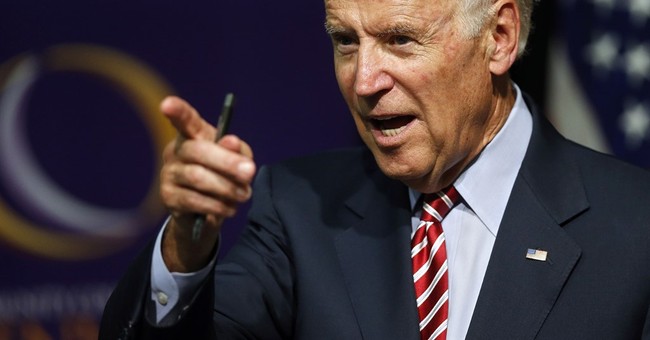 Even if the Democrats had a strong candidate running, after eight years of the worst President in American history, the smart money would still have to be on a Republican winning the presidency in 2016. Unfortunately for the Left, instead of a strong candidate Democrats have a crook and a Commie dogfighting it out to be their nominee. With that as a background, you start to understand why Democrats could view a candidate as ridiculous as Joe Biden as a potential savior.

Of course for Democrats, the problem with having Joe Biden defeat Hillary Clinton and Bernie Sanders to become their nominee would be that they would be stuck with Joe Biden as their nominee. You know, “Crazy Uncle” Joe. “Creepy Uncle” Joe. The uninspiring candidate who inappropriately touches women, says bizarre things and ran at 2% in the Democrat primaries in 2008 because nobody in his right mind wants him in charge of anything.

Granted, Biden does now have 8 years of experience as Barack Obama’s Vice-President since his run at the presidency in 2008, but is that really an advantage? All that means is that the baggage of Barack Obama’s failed presidency is tied around his neck like an anchor.

If he ran, Joe Biden would be responsible for the exploding national debt, rise of ISIS, losing the war in Iraq, Fast and Furious, the IRS persecution of the Tea Party scandal, Benghazi, 20% of Americans on food stamps, 11 million Americans leaving the workforce since Obama took over, America losing its AAA credit rating, the failed trillion dollar stimulus, the 25 million lost in the corporate welfare bailout of GM and Chrysler, the NSA spying on Americans, releasing five Taliban terrorists in exchange for Bowe Bergdahl, Obama’s open border policies, unilateral amnesty and Obamacare among many, many other snafus, screw-ups, scandals and setbacks.

Essentially, a vote for Biden would be a vote for a third term of Obama and given that Obama’s approval rating is about 45% right now (If the polling data today was all likely voters, it would probably be closer to 40%), America doesn’t seem to have an appetite for four more years of incompetence, lying, racial division and lawlessness.

That means minority voters will still vote for him, but they won’t turn out for him the same way they did for Obama.

Furthermore, in a time when the American people in both parties seem to be hungry for an outsider, just about the only person the Democrats could run who would seem like more an insider than Hillary Clinton is Biden. He has been locked away in the attic of the White House for eight years to keep him from embarrassing the Party, but every so often he emerges to inappropriately put his hands all over some uncomfortable-looking woman or to belt out a dumb quote like,

“Look, John [McCain’s] last-minute economic plan does nothing to tackle the No. 1 job facing the middle class, and it happens to be, as Barack says, a three-letter word: jobs. J-O-B-S, jobs.”

Democrats are desperate to find an answer to the question, “Who can save us from having Hillary Clinton or Bernie Sanders as the nominee?” However, if the answer to a question is Joe Biden, that question is probably, “Who’s that old guy chasing the squirrel?”