Liberalism Is Your Crotchety, Judgmental Aunt Wagging Her Finger At You 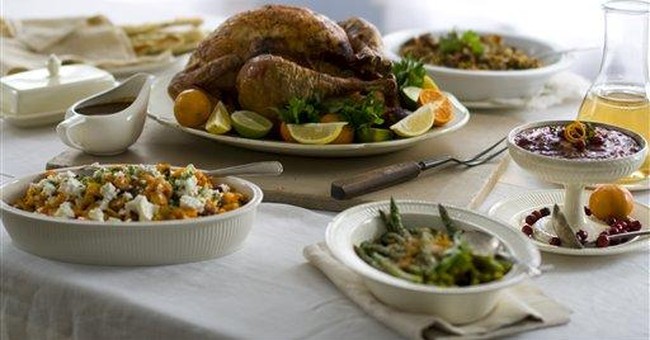 Ever been pinned down at Thanksgiving Dinner by a crabby relative who goes on a tirade about trivial complaints which are laced with biting criticism? "Why are skirts so short these days?" "You've gained a few pounds." "Ugh, next you'll be talking to those 'negroes!' You're barely able to tolerate it because she's old, out of it and you only have to be around her for a few hours before she goes home to her 12 cats and you don't have to see her for another year.

Well, liberals have become the equivalent of your b*tchy spinster aunt, but the worst offenders are young, their self-righteous whining is incessant and they never seem to go away.

Don't believe it? Well, you already do if you're not a liberal because you've long since gotten tired of their nagging.

"The Redskins’ name is unfair to Indians! It must be changed!" "How dare you refuse to bake a cake for a gay wedding! We're going to run you out of business!" "You disagree with a black man! That means you're rraacccisssst!"

Pretty much EVERYTHING is racist these days. In fact, half the time when you hear something called racist, you have to wait for the explanation to figure out why it's supposed to be bigoted. One of my recent favorites is a claim that hoop skirts are racist. Why? Who knows? Maybe it’s the same reason that The Lord of the Rings or Devil’s Food Cake is supposedly racist. Even if there isn't a professional race hustler around who's creative enough to come up with something you've done or said that's supposedly racist, they tag you as a bigot anyway because of some supposed "white privilege" you have.

If the incessant cries of racism don’t get to you, then the increasingly hyper-sensitive feminists will. That pack of harpies ruining men’s lives for putting up a swimsuit calendar at work was annoying enough in the sixties, but if anything, they have even more trivial, pampered, first world complaints to nag everyone about today.

Of course, they can’t say that; so everything is “rape culture.” Men and women are having sex drunk? That’s rape. You’re anti-abortion? Probably because you want women to bear the children of men that raped them. You think rapes on college campuses should be investigated by the police instead of women’s studies professors? You must be pro-rape!

Liberals complain incessantly about racism because almost everyone in America is against it and they constantly accuse people for fomenting “rape culture” for the same reason. As long as people they don’t like are spending all their time defending themselves against charges that they’re racist and love rape, they’re hoping everyone else won’t notice that liberals have gone CRAZY.

Crazy enough that the word “mansplaining” is actually a thing. That’s when a man explains something to a woman that she already knows. There are even whole TUMBLR pages dedicated to criticizing “manspreading,” which is men who spread their legs on the subway, presumably because they don’t want to squash their junk. By doing that, they’re apparently asserting their male privilege…or something. Then there’s “Gamergate,” which long story short, is a gaggle of liberal hens incessantly clucking at men who want to play video games in peace because guys who spend all their free time playing Madden and Street Fighter apparently aren’t sufficiently deferential to the nagging of a bunch of harpies who want to lecture them about feminist trivia.

Of course, the list of issues that set off liberals goes far beyond race and feminism. Lefties demanded that Mozilla CEO Brendan Eich lose his job for being opposed to gay marriage. The liberals at Planet Fitness banned a woman at the gym because the women’s bathroom should be for women as opposed to men who identify as women. A liberal Muslim at the University of Missouri demanded that the incredibly popular war movie American Sniper be banned because it made her feel “unsafe.” Support for the 2nd Amendment was declared “homophobic” at Kalamazoo College. Libs block conservative speakers at college campuses when possible and often throw things. They chant and try to disrupt their speeches if that doesn’t work because their tender liberal ears can’t handle a contrary opinion. Asking someone from another country where he’s from is considered a “micoaggression” by liberals, which basically is just another term for, “We don’t have enough things to cry about already.” Mount Holyoke College is even pulling The Vagina Monologues because it’s not sensitive enough to men with vaginas. I know, I know, if you have a vagina, you’re not a man, but you have to humor these loons a bit; they’re coo coo for Cocoa Puffs.

As you’re discussing all these issues, you have to be careful because you might accidentally use a “trigger” word that upsets some terribly sensitive liberal soul. Oberlin College can tell you all about it.

Oberlin College has published an official document on triggers, advising faculty members to "be aware of racism, classism, sexism, heterosexism, cissexism, ableism, and other issues of privilege and oppression," to remove triggering material when it doesn't "directly" contribute to learning goals….

That’s no small matter because once liberals, the world’s most easily offended people, have been “triggered” by something you’ve done, then they view themselves as victims who have a right to go to insane lengths to fight back against your grievous attack.

Last March at University of California–Santa Barbara, in, ironically, a “free-speech zone,” a 16-year-old anti-abortion protester named Thrin Short and her 21-year-old sister Joan displayed a sign arrayed with graphic images of aborted fetuses. They caught the attention of Mireille Miller-Young, a professor of feminist studies. Miller-Young, angered by the sign, demanded that they take it down. When they refused, Miller-Young snatched the sign, took it back to her office to destroy it, and shoved one of the Short sisters on the way.

Speaking to police after the altercation, Miller-Young told them that the images of the fetuses had “triggered” her and violated her “personal right to go to work and not be in harm.” A Facebook group called “UCSB Microaggressions” declared themselves “in solidarity” with Miller-Young and urged the campus “to provide as much support as possible.”

Incidentally, those last two paragraphs are from liberal writer Jonathan Chait who wrote a column complaining about how intolerant liberalism has become now that his fellow travelers have moved on from going after Duck Dynasty and Rush Limbaugh to *** gasp *** targeting liberals like him, too.

Liberals are like Iran’s morality police, but instead of screaming at women for showing their ankles or going out in public without a male relative, libs yell at you for wanting to play video games without feminist jargon in them or wanting to only have women in the women’s bathroom. They’re nasty, quarrelsome and many of them are young, which means they may have those sticks wedged in their behinds for life. Maybe Obamacare should be authorized to yank them out – at least until we get rid of it and give the whiners something to REALLY complain about.