7 Reasons I'm A Conservative, Not A Liberal 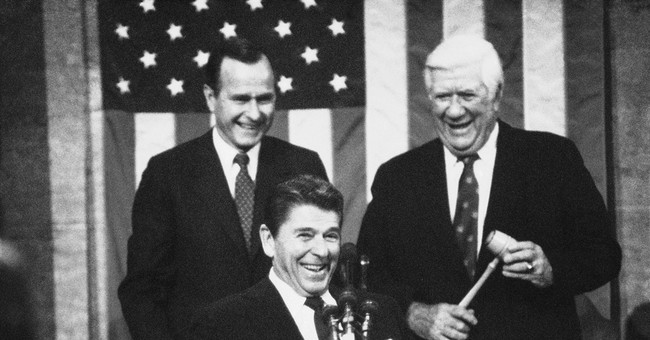 1) I'm a pragmatist: At its heart, isn't politics supposed to be about making life better for people? If an education program sounds good, but doesn't help kids learn, what good is it? No matter how good an economic policy sounds today, if it turns your city into Detroit over the long-term, what good is it? If your stimulus program just adds to the deficit and doesn't actually "stimulate" the economy, what good is it? Unfortunately, a lot of liberals seem to choose what policies to support based on whether they make them feel nice or mean, instead of whether they work. That's a short-sighted, destructive way to govern and as a conservative, it's not something I could ever support.

2) I believe every human being has great potential: Not everybody can be Einstein, Steve Jobs, or Babe Ruth, but everybody can be good at something. A person can be a good parent, a good volunteer, the best cashier in the store -- people can do something they can take pride in. This matters a great deal because as Abraham Maslow said, "If you plan on being anything less than you are capable of being, you will probably be unhappy all the days of your life." Encouraging other human beings to be their best matters not just on the human level, but as a society. Conservatives believe that everyone, no matter what his race, gender, sex or religion, has that potential to be something special.

On the other hand, the essence of liberalism is encouraging people to fail, both because failures are more likely to vote Democratic and because it makes liberals feel better to tell other people how to live their lives. So much of modern liberalism is oriented around teaching people to see themselves as victims, to be dependent on government and to nurse a sense of grievance against the rest of society. You don't become a champion on welfare. If you're waiting for the government to solve your problems, you're going to be waiting a long time. Happy, successful people don't ramble on about imaginary "micro aggressions," "white privilege," and "being held down by the patriarchy." Independence, self-reliance and seeing the government as an obstacle, not a sugar daddy are the first steps towards being all you can be in America.

3) I lack faith in government: Whether you view government as a "necessary evil" or a "good" will make all the difference in the world in what policies you support. Our government doesn't do anything as well as the private sector. It spends more, takes longer, is dumber, is less compassionate, provides terrible customer service, is difficult to deal with and incessantly congratulates bureaucrats for their mediocre performances. The more government you have in your life, the worse off you will be. The more government we have in our country, the worse off we'll all be. Despite all of that, liberals love government for a simple reason: it gives them a way to control people who would never freely choose liberalism.

4) I'm a Christian: As imperfect of a Christian as I may be, my priorities are still God, family, friends, country and conservatism. On the other hand, you can't really be a liberal and a Christian because both liberalism and Jesus Christ demand to be put first in a person's life. If you're a Christian, you're against killing babies and against gay marriage and you support Christianity. To be a liberal in good standing, you have to support killing babies, support gay marriage and at a minimum, you have to turn a blind eye to people smearing Christians on a regular basis. Calling yourself a "liberal Christian" is almost as much of an oxymoron as a "Satanist Christian."

5) I'm a student of human nature: I have a degree in psychology and have always loved figuring out what makes people tick. However, it doesn't take Sigmund Freud to conclude that people will work harder for themselves than someone across the country, that people respond to economic incentives, that morals matter, and that self-reliance is better than dependency. Liberals are forever trying to rewrite human nature from scratch in order to try to fit into some utopian vision of how the world should be. Communism wouldn't have worked if different people were in charge of it. Rewarding illegal aliens for breaking the law encourages more illegal aliens to come to this country. Paying mothers who have children out of wedlock with welfare and food stamps increases the number of single mothers. Where liberals do understand of human nature, they use it in an insidious fashion to hurt people and benefit themselves. Encouraging people to become dependent on the government so that they're more likely to vote for you is an evil act that no decent human being would condone.

6) I'm a student of history: If you crack open a history book once in a while, it's amazing how much you'll learn. If you do, it'll quickly become apparent that capitalism far outstrips every other economic system known to man. You'll also find that as a general rule, the more power that's concentrated in the hands of the government, the worse off the people inevitably seem to be. You'll see that corruption and degeneracy rots societies from within, war will be ever present and most importantly, that freedom, democracy, and prosperity are rare in human history and that wise people should never take those things for granted. The wheels of history turn very slowly, but they do grind civilizations that don't pay attention to their lessons into a very bloody pulp.

7) I believe in the collective wisdom of the people who came before me: Thomas Sowell also spoke for me when he said, "Out of every hundred new ideas ninety-nine or more will probably be inferior to the traditional responses which they propose to replace. No one man, however brilliant or well-informed, can come in one lifetime to such fullness of understanding as to safely judge and dismiss the customs or institutions of his society, for those are the wisdom of generations after centuries of experiment in the laboratory of history."

Liberals are heedless, careless and foolish with the past. They call for the overturning of traditions and doctrine that have served us well for hundreds of years based on nothing more than feelings and just shrug off the almost incalculable damage their policies cause. Like an alcoholic who thinks about nothing but where his next drink is coming from, liberals think about nothing other than their feelings in the moment without considering the consequences of their actions.