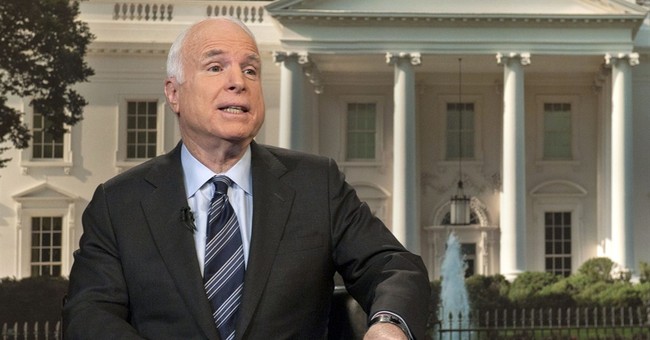 If you were a football coach and one of your players looked for a reporter at half-time so he could criticize other players on the team, complained that your strategy is all wrong, and generally told everyone listening that the team deserves to lose, do you think he'd be on the bench the next week? Do you think he'd have a job at all?

Whether you agree with Ted Cruz and Mike Lee (I do) or not, they had a strategy they wanted to pursue. They started by pushing to defund Obamacare and from there, the GOP was supposed to negotiate Obamacare compromises.

John Boehner apparently thought that strategy made enough sense that he decided to pursue it.

Has he executed it particularly well? No; after a brilliant start, Boehner seems to have quieted down and lost focus. That's frustrating because the GOP can win this fight with the public while firing up its own base any time it wants. As Dick Morris suggested,

End the shutdown immediately by passing a continuing resolution to fund the government EXCEPT that the subsidy lawmakers get for health insurance should be ended. The public will applaud this and God grant that Obama is dumb enough to oppose it!

Let the Democrats go out and defend shutting down the entire government day after day to protect their exemption from a law they're forcing on the rest of the country. Let them explain why they deserve to have 75% of their Obamacare fees paid by the taxpayers, while tens of millions of Americans are paying more money they can't afford for a service they don't want in the first place. The Republicans already voted for that once when they knew the Democrats would reject it; so when they can actually win this whole fight if they want to put it forward again and stick to it, why are they refusing to pull the trigger? A lot of people are going to suspect that the real question here is whether the Republicans would rather win this fight politically or whether they'd rather lose and keep their Obamacare subsidies. There's no question which decision would be better for the Republican Party, the country, and for the long term prospects of getting rid of Obamacare. So the question now is why aren't they doing it?

That being said, it certainly doesn't help when Republicans in Congress are publicly trying to undermine their own party during a PR blitz. You don't go on television during a shutdown and tell the world that your party is shutting down the government. You don't go out and take vicious shots at other Republicans for advocating the strategy your party is engaged in, especially when you don't have the cahones to go after Democrats the same way. If conservative Republicans like Justin Amash and Tim Huelskamp were punished for not being deferential enough to leadership, how is it that establishment Republicans can actively work to undermine the Republican Party during a shutdown fight and get a complete pass?

If these mediocrities are so desperate to get in the good graces of the media that they're willing to try to sabotage their own party, then they should change teams and become Democrats. If they want to become commentators so they can say what they want without it hurting the GOP, they should quit and go to work for MSNBC. If they just don't like it because there are actually conservatives who expect them to get off their lazy asses and fight for conservatism for the first time in their entire political careers instead of just talking a good game when it doesn't matter, then they're in the wrong business. In any case, after the petulant way these Republicans have behaved during the shutdown, tell me why anyone other than Democrats would miss them if they lost in a primary?

1A) Ted Cruz and 30 or 40 people in the House. We have to start going after him by name. … It’s really time to speak out against him. -- Peter King

1B) We are the ones who did shut the government down. You don’t take the dramatic step of shutting down the government unless you have a real strategy. -- Peter King

2) Let's have a little straight talk, Martha. [The administration] wouldn't have had the opportunity to handle it that way if we had not shut down the government on a fool's errand that we were not going to accomplish. -- John McCain

3) The House seems to be having a hard time. The president’s not helping much. Sen. Reid and Sen. McConnell are the adults in the room and hopefully they’ll be able to make a recommendation. -- Lamar Alexander

4) If the government shuts down, it’s not what you think it would be. I have actually experienced that. If anybody creates a process where our military doesn’t get paid, and their families, they’re going to make an enemy … of me for life. .....You know, Strom Thurmond gave me some pretty good advice: don’t question another senator’s motive. That’s pretty good. ...I thought the choice of making Democrats strip out defunding Obamacare was a really good approach to show the differences between the parties, but the idea that the Senate Republicans would shut the government down until everybody bent to our will never made a whole lot of sense to me. -- Lindsey Graham

5) Unlike many Republicans, (Devin) Nunes is publicly criticizing some of his colleagues, calling them "lemmings with suicide vests" earlier this week.

The California Republican said a small group of lawmakers, what he calls "the lemming caucus," have been blocking GOP House leadership for three years.

"It's guys who meet privately. They're always conspiring. It's mostly just about power. And it's just gotten us nowhere," said Nunes.