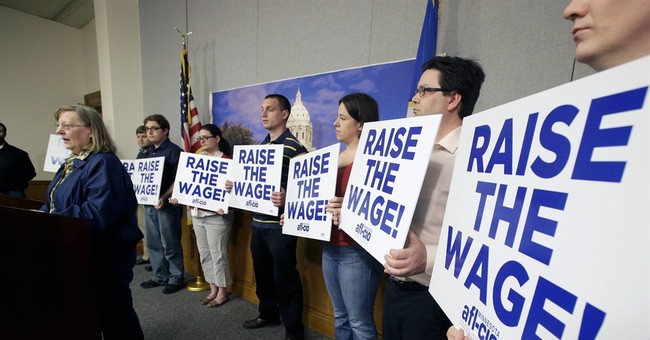 “The trouble with our liberal friends is not that they are ignorant, but that they know so much that isn’t so.” — Ronald Reagan

“There are no solutions; there are only trade-offs.” -- Thomas Sowell

"In the matter of reforming things, as distinct from deforming them, there is one plain and simple principle: There exists in such a case a certain institution or law; let us say, for the sake of simplicity, a fence or gate erected across a road. The more modern type of reformer goes gaily up to it and says, ‘I don’t see the use of this; let us clear it away.’ To which the more intelligent type of reformer will do well to answer: ‘If you don’t see the use of it, I certainly won’t let you clear it away. Go away and think. Then, when you can come back and tell me that you do see the use of it, I may allow you to destroy it.’" -- G.K. Chesterton

The biggest problem with modern liberalism is that it has devolved into little more than childlike emotionalism applied to adult issues. A liberal picks which policies to support based on whether they make him feel "nice" or "mean" and then he declares a policy to be a moral imperative based on his emotional reaction to it. There's no consideration put into whether the cost of a program is worth the benefits provided or whether the policy ultimately benefits more people than it harms; there's just a wild lurch based on feelings. Unfortunately for liberals, governing in that fashion is not sustainable over the long haul and leads to the sort of disasters we've recently seen in Greece and Detroit. Unfortunately for the rest of us, the wheels of history turn slowly and at times, ambiguously, which means bad ideas can take a long time to prove their unworthiness -- so long in fact, that there's often someone trying the same failed idea under a new name by the time the old idea has been discredited. 1) Price controls: Limiting the prices of certain goods like gas, electricity or food seems a kind -hearted thing to do. However, lamentably, it destroys the way the market functions. If the price of a product or service is kept artificially low, it will cause the populace to use more of it than it normally would. When this happens under ordinary circumstances, suppliers spend more money to keep the product coming (They buy surplus stock, set up 2nd and 3rd shifts at their plants, etc., etc.), they raise the price to cover their higher expenses and they wet their beak a bit by taking a little extra profit. On the other hand, if they can't cover the extra expenses because of price controls, they'll still try to sell what they have available, but there is no longer an incentive to use extra resources to meet demand for the product. So, when you see price controls put in effect, prepare yourself, because as sure as night follows day, a shortage is going to eventually occur.

"...(B)lack students who are being turned into failures at MIT, if they’d gone to engineering school at the University of Pennsylvania or Cornell, they’d be on the Dean’s list."

That's an awful lot of human potential being wasted in the name of Affirmative Action.

3) Rent Control: Everybody needs a place to call home; so keeping rents low seems like a benevolent idea. Also, who wouldn't want a great place to live on the cheap? However, in practice, cities with rent control are the most expensive places in America to rent. That's because housing is a for profit industry. Existing apartments that can't make a profit will close and new builders certainly aren't going to build more space if they can't make a profit on it. If you have a housing glut, it's cheap to find a place to live. If you create an artificial housing shortage via rent control, it creates more homelessness and makes an area less affordable to live in for average families.

4) The DDT Ban: DDT is a safe, incredibly effective pesticide that was used extensively here in the United States with few negative effects. Sadly, Rachel Carson's junk science book Silent Spring made a lot of wild, unsupported claims about DDT hurting birds that forever stuck in the minds of liberals. The substance was banned worldwide and even after the ban was lifted, liberal foundations, governments, and USAID have applied tremendous pressure to keep poor countries from using it. This is regrettable because DDT was and still is the cheapest and most effective way to kill mosquitoes that spread malaria. It's very difficult to estimate the numbers of people in poor nations that have died because of liberal hatred of DDT, but most estimates seem to at least put it in the tens of millions with another million or so dying each year. There are a lot of dictators whose names we curse that haven't killed as many human beings as liberals have by making sure poor people in South America and Africa can't use DDT to free themselves of the scourge of malaria.

5) The Minimum Wage/Living Wage: What could be wrong with making sure that everyone makes at least a certain minimal amount for any work he does? After all, shouldn't everyone make enough to support a family off his wages? That's a nice idea, but the problem with it is that businesses aren't charities and when you force them to pay employees more per hour than they're worth, the company is probably going to react either by cutting their work force, replacing them with machinery, technology or outsourcing, or by hiring a smaller number of higher quality workers that are worth the money. In other words, minimum wages and living wages create unemployment. A great example of how this works recently happened in D.C. A law was passed targeting Wal-Mart which would have forced the retailer to pay its workers 50% more than the minimum wage. Wal-Mart's response was to cancel the opening of six stores in the area. The liberal argument is that the thousands of people who would have voluntarily chosen to work for Wal-Mart will be better off unemployed. The conservative argument is that they should be allowed to make their own choice about whether the pay, health care, skills, and potential for advancement in the job are worth it.