The 20 Greatest Quotations From Rush Limbaugh 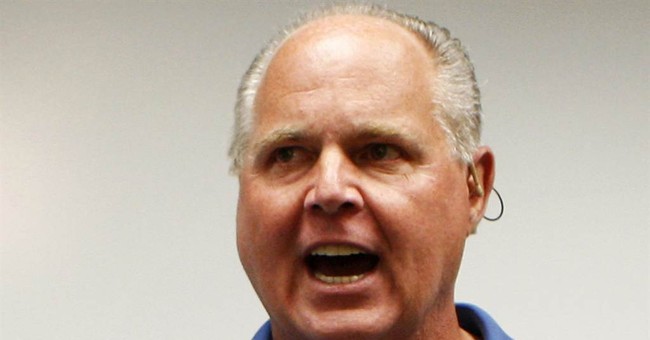 If you listen to liberals, you'd think that Rush Limbaugh is the de facto boss of the entire Republican Party. So, if they're going to portray him that way, then it seems like a good idea to give people -- who have yet to listen to his radio show --information about his message that goes beyond out-of-context quotations supplied by liberals who loathe him. There are millions of Republicans, myself included, who became conservatives because of hearing quotes like these from Rush Limbaugh.

20) "I guess politicians can be excused for thinking the electorate is stupid because they keep winning reelection. If you were Barbara Boxer or Harry Reid and you kept being reelected, you'd have to think, 'Half of my state is stupid.' But then you wouldn't be smart enough to think that if you had their brains."

19) "I'm convinced that a lot of people simply don't know what's available out there and how it is possible to find a job and work your way up if you are willing to accept responsibility for your life. I know what it's like to be on the bottom. I've been broke. I've been fired seven times from jobs. And I don't even have a college degree. But I didn't blame anyone else for my problems. I knew that if I didn't try to solve them on my own or with the help of friends or family members, no one else was going to take care of me."

18) "The liberals, you see, do not want to confront conservative ideas; they just attack conservatives as a group, and particularly their motives. If you believe what they say about us, you would think that if someone like Bill Bennett, or Jack Kemp, or myself were driving through South Central Los Angeles and looking at the slums and poverty, we would go: Oh, man, this is great — they’ve got nothing, so that means we get more. It’s simply preposterous. We all want to live in a great country. And for the country to fulfill its potential, you need individuals to be the best they can be — not the government taking care of people."

17) "In a country of children where the option is Santa Claus or work, what wins?"

We're here to defeat them. We're here to politically defeat them and see to it their agenda does not succeed. And when was the last time...you asked the Democrats to compromise with me? When's the last time you asked the Democrats to compromise with Newt Gingrich or George W. Bush? You guys have this one-way street, you have this august view of yourselves as in power in perpetuity, as a birthright and we're just a bunch of little ankle biters knocking around bugging you people, a bunch of Chihuahuas and we gotta start healing, ‘Yes master.’ We gotta run around and when you say ‘sit’ we sit, when you say ‘heel’ we heel, when you say ‘lay down’ we lay down. It ain't that way...."

14) "Conservatism is an active intellectual pursuit; it requires a constant vigilance. It has nothing to do with feelings. Liberalism is the most gutless choice you can make. You just see suffering and say, 'Oh, I feel so horrible!'"

13) "Let me tell you who we conservatives are: we love people. When we look out over the United States of America, when we are anywhere, when we see a group of people, such as this or anywhere, we see Americans. We see human beings. We don't see groups. We don't see victims."

10) "The way to improve our schools is not more money, but the reintroduction of moral and spiritual values, as well as the four ‘R's: reading, 'riting, 'rithmatic, and Rush."

9) "The world’s biggest problem is the unequal distribution of capitalism. If there were capitalism everywhere, you wouldn’t have food shortages."

7) "I’m not opposed to the protection of animals. But the best way to do that is to make sure some human being owns them."

6) "Morality is not defined and cannot be defined by individual choice."

5) "Progress is not striving for economic justice or fairness, but economic growth."

4) "You know why there's a Second Amendment? In case the government fails to follow the first one."

2) "Bigot: A person who wins an argument with a liberal."

1) "What about feeling sorry for those…who pay the taxes? Those are the people NO ONE ever feels sorry for. They are asked to give and give until they have no more to give. And when they say 'Enough!' they are called selfish."