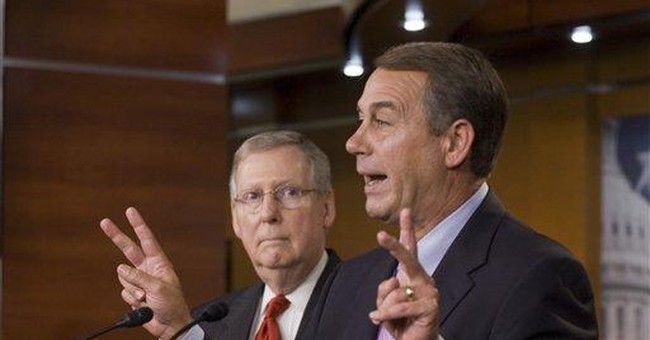 Conservatives are sick and tired of being taken for granted, misrepresented, and talked down to by the same "elite" Republicans in Washington who hopelessly screwed everything up during the Bush years.

Everybody knows exactly whom we're talking about here. The same snobby, elitist, stuffed shirt, squishy, poll-obsessed Country Club Republicans who went to D.C., forgot who put them there, wasted the incredible opportunity they had to change this country for the better, and are now pointing the finger at everyone except themselves for their mistakes.

Here are five messages for those people: We're not going back to the Bush years: Conservatives are sick and tired of hearing Republicans talk about conservatism to get our support and then watching them immediately move to the center once they get elected.

We expect you to govern the way you campaign when you need our support. If you don't do it, we're going to make sure you catch hell for it.

This country can't survive if you're as childish as the Democrats: For the last few decades, we've had an "adult" party that deals in the real world and a "children's party" that promises everyone everything for nothing. Unfortunately, the "adult party" has been acting a little too much like a 40 year old going through a mid-life crisis for the last few years. Newsflash: This country cannot remain a super power or even a great nation if the Republican Party doesn't start acting like an adult party again.

Yes, the Democrats' "something for nothing" election promises may seem appealing at times, but the country can't thrive with two parties like that -- and what good does it do anyone to be elected king of the crap pile? We don't expect the Republican Party to be ideologically perfect or to please conservatives in every way on every issue. That's not the real world. But, if the Republican Party isn't willing to draw a line in the sand over the things that have made this a great country, then the party just isn't worth a flat damn. There have to be SOME lines that can't be crossed without paying a terrible price.

Stop sabotaging our candidates: It is absolutely infuriating that Republican Party organizations talk incessantly about conservative principles, rely on conservatives for the overwhelming majority of their funding, and then turn around and sabotage conservative candidates like Doug Hoffman and Marco Rubio. Who the hell do you think you are?

We're not telling the Republican Party to endorse conservative candidates over moderate candidates or demanding that middle-of-the-road candidates be tossed from the party. What we are saying is, "Don't take our money, use it against us, and then take a haughty 'we know best' attitude." If you do, we're going to take you to the woodshed and show you why it's a bad idea.

"There will be no elite in a bankrupt America." -- Jonathan Hunter: If fiscal conservatism doesn't work any more, then America doesn't work any more because we can't live like this long term. If even the Republicans look at government as just another way to distribute as much borrowed money as they can get by with to their supporters, then this country is going to look like Argentina after the crash in twenty years. This is do or die for the future of this country and Republicans, including Republican members of Congress from blue states, need to understand that.

You're not as smart as you think you are: It must be grand to be a Congressman or senator. Your fellow citizens elect you to office. Then you go to D.C. where your staff spends all day fretting over you and telling you how wonderful you are. Everywhere you go, all you hear from consultants, your fellow members of Congress, and all the people who want things from you is that you can do no wrong. If only people understood how SMART you really are. It's like being five years old all over again except everyone shares your mother's opinion of what a brilliant genius her little man is going to turn out to be.

Meanwhile, back in the real world, Republicans just spent two straight elections getting splattered like bugs on a windshield. That happened despite the fact that their constituents were screaming at the top of their lungs about the oncoming danger. Yes, that's right; the political novices in NoWhereville, South Dakota were more accurately predicting the problems ahead than the Republican politicians and political consultants in D.C. How in the world we got to a place where so many politicians have such a shallow understanding of politics, I don't know, but Republicans in D.C. need to wake up and smell the coffee. YOU GUYS blew it in 2006 and 2008, not us.