“The Magnificent Seven” Review: Strong Reboot of a Classic Story

John Hanlon
|
Posted: Sep 28, 2016 12:01 AM
Share   Tweet
The opinions expressed by columnists are their own and do not necessarily represent the views of Townhall.com. 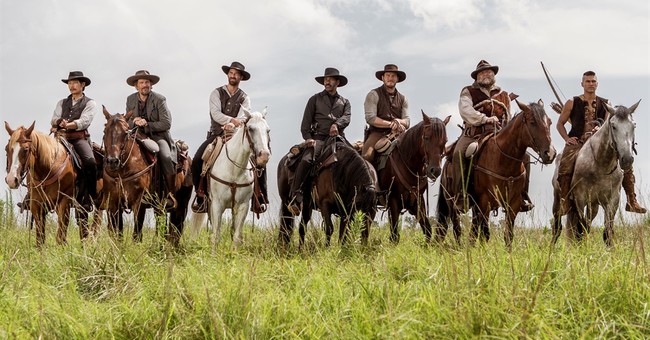 It only takes a few moments in the new remake The Magnificent Seven for the villain to appear. Bartholomew Bogue (Peter Sarsgaard), a fierce and unapologetic outlaw, walks into a packed church and starts threatening the congregants. Believers are killed and the church is burnt to the ground. The faith of the townspeople is tested and it’s up to Emma Cullen (Haley Bennett), a newly-widowed resident, to seek out heroes to save the community.

She eventually finds Chisolm (Denzel Washington), a warrant officer who is known for his fighting abilities, to help defend her community. Chisolm recruits six members to join his crew. Together, the team becomes the Magnificent Seven, an eclectic group of honorable men and mischievous outlaws.

Aside from a scene of violence at the feature’s beginning and a gun fight in the first hour, the movie’s violence is mostly saved for the last thirty minutes. Instead, director Antoine Fuqua takes his time setting up his characters and the stakes involved. He takes the time for these characters to grow.

When Cullen first approaches Chisolm, for instance, she isn’t the stereotypical bloodthirsty widow. She notes, “I seek righteousness as should we all but I will do with revenge.” She, like many of the characters here, is a character of faith who is pushed towards violence.

The crew is composed of an interesting mix of figures. Chisolm recruits Josh Faraday (Chris Pratt), a rogue outlaw with an affection for magic tricks. He reunites with a well-known sharpshooter known as Goodnight Robicheaux (Ethan Hawke). He also enlists the help of a native American known as Red Harvest (Martin Sensmeier), who had no previous ties to the group. The honorable Jack Horne (Vincent D'Onofrio), the well-trusted ally Billy (Byung-hun Lee) and the quiet Vasquez (Manuel Garcia-Rulfo) compose the rest of the group.

Each of the men have their flaws and some of them are just there for the money. However, when they realize Bogue will send an army to destroy them, their greed gives way to something more honorable.

The screenplay by True Detective creator Nic Pizzolatto  and Richard Wenk, who previously wrote The Expendables 2 and The Equalizer, was adapted from The Seven Samurai screenplay. It nicely showcases these characters both as individuals surviving in the Wild West and as a pack united to save a town. The script also allows for some great training and planning sequences as the seven work to prepare the townspeople for the upcoming attack.

As Chisolm tells the locals, “Want to keep your town? You’re gonna have to fight for it.”

When the final battle arrives, the film has firmly set the stakes in  place and laid the groundwork. Director Fuqua shows the town the night before the battle and nicely shows the characters preparing as the church bell — which has been resurrected since the fire — rings just before the attack. As the bell rings, the screen fades to black and then shows another of the main characters awaiting what could be their final moments on Earth.

Throughout the entire endeavor, there’s a religious theme that only emphasizes the journey of these individuals. That theme is set into motion when Bogue first attacks the church and remains a key point of the story as the main characters help rebuild it. When the fight comes, these seven stand as heroes looking to save a town from a psychotic dictator.

As Horne wisely notes, “To be in the service of others with men I respect like you all, well I shouldn’t have to ask for more than that.” There's plenty of violence in the film here so those wary of gunfights and battles should steer clear. But the film delivers more than that. It showcases a powerful journey of strength and integrity as these man become saviors for a community they hardly know.