“Ghostbusters” Review: Reboot Stands on its Own

John Hanlon
|
Posted: Jul 15, 2016 2:29 PM
Share   Tweet
The opinions expressed by columnists are their own and do not necessarily represent the views of Townhall.com. 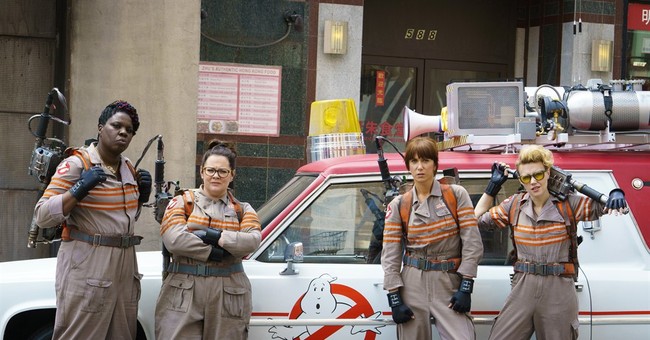 The 2016 Ghostbusters reboot offers viewers exactly what they would want in a reboot. The comedy — which features four funny actresses as the new ghostbusting quartet — stands on its own as a film that should please many fans of the original at the same time that it serves viewers who aren’t familiar with the concept.

Like the original feature, this one opens with a solitary figure — this time a haunted mansion’s tour guide — who comes face to one with an angry spirit. Like the entire movie, the scene feels familiar but distinctly stands apart from the original (which featured a library sequence at the opening).

The owner of the mansion recruits sheepish Columbia professor Erin Gilbert (Kristen Wiig), the co-author of a book about the paranormal, to investigate the situation.

Soon enough, Gilbert teams up with her co-author Abby Yates (Melissa McCarthy) and the eccentric paranormal investigator Jillian Holtzmann (Kate McKinnon) to start facing off against the mischievous ghosts in town. They are joined by the enthusiastic Patty Dolan (Leslie Jones), a transit worker who knows New York City well and who recently came face to face with a ghost.

It’s undeniable that this feature repeats some of the main plot points of the original but the film also goes on its own path. A new world of paranormal investigations is launched here. The script — written by director Paul Feig and Katie Dippold — quickly establishes its own wit and style, which offers a different vibe than the 1984 original (which relied in part on the comedic talents of Bill Murray).

The all-star cast of Wiig, McCarthy, McKinnon and Jones are tremendous as the leading characters here. Although Wiig's character starts out as a strait-laced professor (I was worried that she would be forced to play the “straight man” here), her character quickly transforms into a hilariously determined investigator ("Ghosts are real," she shouts.). Wiig’s facial expressions and her talent for physical comedy are played to great effect.

McCarthy’s sarcastic charm and her affection for physical comedy are also used well here while Jones' entrance into the world of the paranormal provides her a few great lines and a few hilarious moments (including a few standout encounters with a ghost at a rock concert).

The two biggest standouts though are McKinnon — whose character’s eccentricities are undeniably hilarious — and Chris Hemsworth, who plays dimwitted receptionist Kevin. McKinnon’s character isn’t the main one here (like Bill Murray’s character was the lead in the original) but as a supporting player, she steals much of the show. To the writers’ credit, McKinnon’s character never feels over-used but when she’s onscreen, it’s a blast to see what she’s up to. The same goes for Hemsworth, who does spectacular work in his limited screen time.

Before the film was released, there were skeptics who didn’t believe in the concept of casting females as the lead ghostbusters. Those naysayers have been undermined by the quality of this reboot, which hopefully will relaunch the series and it’s obvious that the writers here had fun playing up the hatred of those commentators (“People crap on us all the time,” Yates says).

To its great credit, this reboot embraces the roots of the ghostbusters while adding a new and quirky spin to the story. All four lead actresses were clearly game for this and the script offers them enough to each shine in their own ways. Fans of these leads and this series should be pleased with the results.

Click here to find out what other critics said about the long-awaited reboot.