The Legend of Tarzan Review: A Bland Adaptation of the Well-Known Story

John Hanlon
|
Posted: Jul 01, 2016 1:33 PM
Share   Tweet
The opinions expressed by columnists are their own and do not necessarily represent the views of Townhall.com. 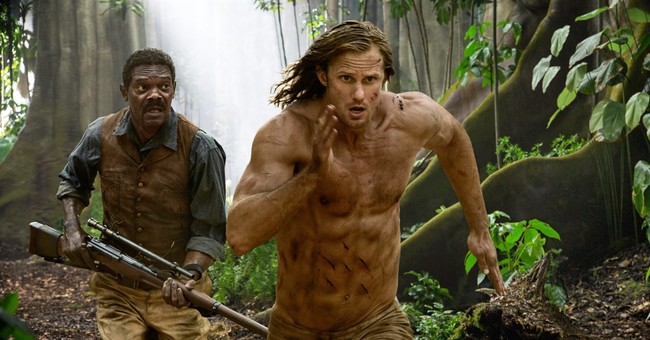 The Legend of Tarzan begins where many films about the mysterious son of the jungle begin. The wild Tarzan, who was raised by apes and once swung from the branches of the Congo, has become a diplomat. When we first see him, he’s dressed professionally in a suit and sitting in a boardroom. His name isn’t Tarzan anymore. It’s John Clayton III but of course, that’s only temporary.

Director David Yates, who previously directed four features in the Harry Potter series including the magnificent final chapter Harry Potter and the Deathly Hallows: Part 2, attempts to reinvent Tarzan here. Starring Alexander Skarsgård as the title character, the feature presents a matured and fully-grown Tarzan. When we first meet Tarzan in the late 1800s, the character believes that his jungle days are over. He’s married to his great love Jane (Margot Robbie) and living in London.

His story is well-known to the public and he’s a celebrity.

Inevitably though, Tarzan is forced back into the wild. An American diplomat named George Washington Williams (Samuel L. Jackson) recruits the lead character on a fact-finding mission. Williams believes that the bankrupted leader of Belgium — who has taken control of much of the Congo — plans to enslave the people of that area.

In this set-up, screenwriters Adam Cozad and Craig Brewer have shown that they can think out of the box. They seemingly rejected telling the origin story again onscreen and this feature’s opening moments suggest that they have more to offer.

That hope fades as the story continues.

When Clayton arrives in the Congo with his wife, the couple is re-united with their old friends both in the wild and in the villages. It’s not long though before the money-hungry Leon Rom (Christoph Waltz) kidnaps Jane, leading Tarzan to return to his wild ways in order to save his beloved wife.

Jane recognizes she’s a damsel in distress but the screenplay hesitates to make her more than that. In fact, there are only a few scenes featuring both Jane and Tarzan in the entire picture so their affection for one another isn’t built as strongly as it should be. Instead, the screenwriters rely on people’s familiarity with Edgar Rice Burrough’s story to understand the connection between them. Tarzan loves Jane. We know that because this story is so well-known, not because the movie captures their relationship. It doesn't.

Skarsgård is well built for the story but his character, like Jane’s, isn’t strong enough to stand on its own. One wonders how Tarzan — a quiet but powerful lad raised in the wild — managed to thrive in London for so long. Waltz, meanwhile, settles into his usual role as a maliciously menacing villain. Leon’s best line in the whole picture is when he tells Jane, “Your husband’s wildness disturbs me more than I can easily express.”

The standout character here is Williams and Jackson manages to eke some fun and excitement out of this traditional story. Jackson seems to be having a blast in the role while some of the other actors can't overcome the screenplay's overt flaws.

There are a few visually-captivating moments here (the arrival of a group of elephants, a sequence depicting a stampede etc.) but the story doesn’t step too far out of the traditional bounds of a Tarzan picture. With Yates directing, one would’ve hoped that he would’ve been willing to take more risks with the story and truly made it his own. Instead, The Legend of Tarzan never embraces its potential or offers anything new for viewers to enjoy.

The movie, it should be noted, is PG-13 and includes some graphic violence. The story isn’t as family-friendly as previous incantations so children should steer clear.