John Hanlon
|
Posted: Jun 24, 2016 12:46 PM
Share   Tweet
The opinions expressed by columnists are their own and do not necessarily represent the views of Townhall.com. 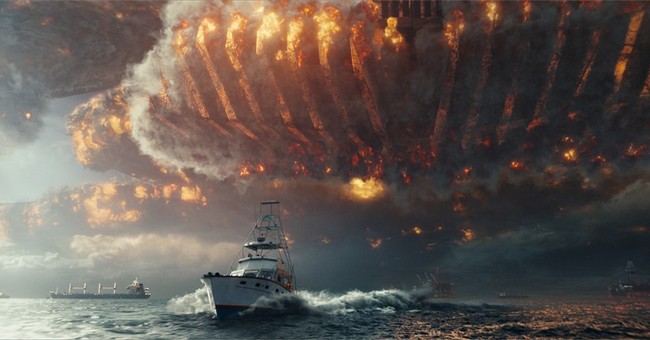 Twenty years after the original Independence Day became the highest grossing movie of 1996, the aliens have returned. Independence Day: Resurgence, the long-awaited sequel, marks the return of the alien invaders as they try once again to destroy our world. Featuring many of the original’s stars (excluding Will Smith, who declined to return), this action-packed sequel offers moviegoers a ridiculously fun and over-the-top action film that shouldn’t be missed.

Roland Emmerich, who directed the original film, returns to the helm here, knowing what viewers want in a feature like this.

Appropriately enough, the opening moments feature a flashback to the presidential speech from the original that is still beloved today. “Today, we celebrate our Independence Day,” President Whitmore (Bill Pullman) declared before our nation led the international fight against these aliens on July 4th.

In this story, twenty years have also passed and Whitmore— so strong and energetic two decades ago — is now a physically-exhausted former president.

The baton has been passed to a new generation and this film features some of the now-grown children from the original. Dylan Hiller (Jessie T. Usher), the stepson of Will Smith’s character, has become a renowned and heroic fighter pilot. Patricia Whitmore (Maika Monroe), President Whitmore’s daughter, served as a pilot as well and now serves in the presidential administration of President Lanford (Sela Ward).

Both of those pilots previously flew with Jake Morrison (Liam Hemsworth), a new character here who watches as the aliens approach from a military base on the moon and helps lead the crusade against them.

When the aliens return— and they come back in a big way— these military heroes and others have to face down the new threat.

Fans of the original will find much to like here. Even while building a new story, the screenwriting team of Nicholas Wright, James A. Woods, Dean Devlin, James Vanderbilt and Emmerich include dozens of references to the original. There are a few scenes that seem like they belong to a remake, rather than a sequel, though. An alien holding the throat of a hostage and speaking directly through him feels a bit tired here as it repeats the same sequence of events from the first feature.

Moments of familiarity like that don’t work but some of the best relationships from the first film do work really well here. Dr. David Levinson (Jeff Goldblum), the eccentric scientist who helped vanquish the first alien invasion, returns here alongside his crotchety father Julius (Judd Hirsch). Both characters have a few great lines with David remarking — during an alien attack — that “they like to hit the landmarks.” When the two characters are eventually reunited, Julius says to his son, “We have to wait until the end of the world for us to get together.”

It really helps as well that the filmmakers are willing to embrace the ridiculousness of the concept in a big way. While the first film had its odd plot developments (like the previously-abducted pilot who wanted to fight the aliens as revenge for their experimentation on him), this one embraces its zaniness with a zest for the outrageous.

Aliens now carry guns. An African warlord joins the fight and reads the alien writings. And after all of the craziness that preceded it, the climax features a huge alien Queen chasing after a bus of children, who were added to the plot seemingly out of nowhere.

There are only a few of the ridiculously outlandish moments that make this sequel so surprisingly satisfying.

When some of this year’s other summer movies are too predictable to be fun or too serious to be satisfying, this one is a welcome reminder that there’s a lot of fun to be had in a silly big-budget film that embraces its patriotic identity (it is the 4th of July, after all) and a comfortable flair for the outrageous.