John Hanlon
|
Posted: May 06, 2016 11:45 AM
Share   Tweet
The opinions expressed by columnists are their own and do not necessarily represent the views of Townhall.com. 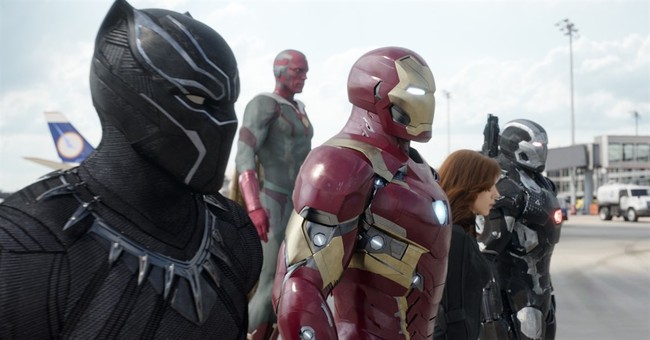 In many superhero movies (see Man of Steel, The Avengers or The Avengers: Age of Ultron), there’s a climactic action-packed sequence where the heroes vanquish the villains, cities get ripped apart and then the heroes go back to their normal lives as if nothing had happened. Just another day for them. Instead of averting that difficult subject as superhero movies have often done in the past, Captain America: Civil War magnifies it and offers a thoughtful debate about the consequences of such destruction.

This third chapter in the Captain America series begins with more mayhem and destruction and a simple mistake made by one of the heroes leads to tragedy. Shortly thereafter, Tony Stark (Robert Downey Jr.) — a hero who dared to take off his mask and reveal his true identity to the masses — comes face to face with another revelation: many innocent people have died in the wake of such mayhem.

Miriam (Alfre Woodard), a mother who lost her son during an Avengers battle, confronts Stark. “You think you fight for us,” she says, “You just fight for yourself.”

Such scenes set the stage for a civil war that pits the repentant Stark against the idealistic Captain America (Chris Evans). More specifically, Stark wants to agree to a UN mandate that would put the Avengers under the supervision of a special committee. Black Widow (Scarlett Johansson), War Machine (Don Cheadle) and the Black Panther (Chadwick Boseman) agree while Falcon (Anthony Mackie), Hawkeye (Jeremy Renner) and the Scarlet Witch (Elizabeth Olsen) argue that the group shouldn’t have to consult a committee to save the world.

The screenplay by Christopher Markus and Stephen McFeely takes its time setting the stage for the showdown to come. It allows these characters an opportunity to debate the UN resolution and voice their own distinctive opinions. As the title character, Captain America leads the battle against bureaucracy noting that “If we sign this, we’re surrendering our right to choose.”

In addition to the thoughtful plot, there’s also a renewed sense of excitement here as Spider-Man joins the team. Tom Holland, who did such amazing work in The Impossible, only has a few scenes here but he makes the most of his screen time by reminding viewers of this franchise’s continued excitement. “This was awesome,” Spidey shouts after a climactic battle sequence. It sure was.

Although some of the first action sequences aren’t that spectacular, the latter ones are truly superb with the Russo brothers crafting an intense but intricate fight sequence that finds some of these grand superheroes fighting against each other. It’s a truly impressing scene where the intense action is matched with the great comedy that has been such a hallmark of this series. A late airport sequence shows a large scale battle that is only later matched by a climactic personal battle between Iron Man and Captain America.

Unlike Batman v Superman: Dawn of Justice, which discussed some of the consequences of massive destruction only to feature a large-scale special effects-laden climax, this movie follows through on its message. The final battle is small in scope but emotionally-driven and thrilling. Daniel Bruhl does a solid job here as Zemo, a villain who has suffered the consequences of the Avenger’s actions but this film is about much more one destructive man. It’s about big ideas and that’s what makes this movie stand out.