John Hanlon
|
Posted: Apr 29, 2016 12:01 AM
Share   Tweet
The opinions expressed by columnists are their own and do not necessarily represent the views of Townhall.com. 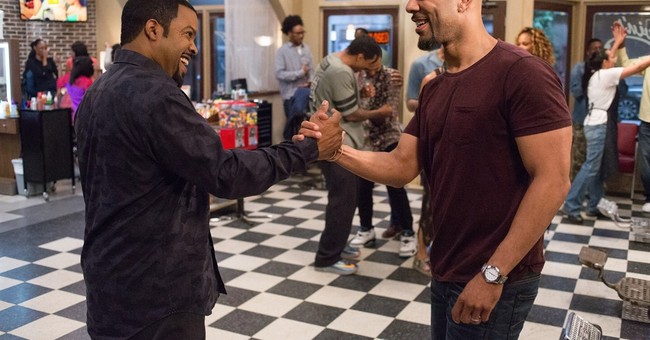 This week, Hollywood was abuzz with news about upcoming political films. The news included the first trailer for a new drama about Edward Snowden and the casting of Will Ferrell in a comedy about Ronald Reagan. In the midst of that news though, a new comedy about gun violence in Chicago is unfortunately being overlooked by many viewers.

On Wednesday, the first full-length trailer for the Oliver Stone feature Snowden hit the internet (check it out here). The drama stars Joseph Gordon-Levitt as the controversial title character, who infamously leaked classified data about our nation’s surveillance program to the media.

Written by Oliver Stone and Kieran Fitzgerald and adapted from Luke Harding’s nonfiction book The Snowden Files and Anatoly Kucherena’s novel Time of the Octopus, the feature promises to be controversial. It’s difficult to judge the film without seeing the finished product (I’m keeping an open mind) but the trailer seemingly offers much sympathy for Snowden’s choices (choices that former Secretary of State Hillary Clinton and Senator Bernie Sanders have publicly criticized). As Gordon-Levitt’s Snowden notes in the trailer, “I’d like to help my country make a difference in the world” and the trailer’s text even teases, “He believed in his country enough to risk everything to save it.”

Also making news this week is the casting news that comedian Will Ferrell — well-known for his Saturday Night Live impersonation of President George W. Bush — is taking on the role of President Ronald Reagan in a new comedy. The move has sparked outrage, not because Ferrell is well-known for taking jabs at Republicans but because the film’s premise seems so cruel.

According to Variety.com, “the story begins at the start of the then-president’s second term when he falls into dementia and an ambitious intern is tasked with convincing the commander-in-chief that he is an actor playing the president in a movie.” Critics quickly spoke out about the casting choice, including members of the 40th President’s own family.

Both of these films promise to be controversial and polarizing pictures.

Interestingly enough though, there is a comedy playing now in theaters nationwide that manages to take on a controversial subject but is being sadly overlooked by many moviegoers. The film is Barbershop: The Next Cut (click here for a full review). The film is the third in the series of Barbershop comedies — not including the spin off Beauty Shop — and has a lot more on its agenda than making people laugh.

The film revolves around a barbershop in Chicago’s South Side managed by the blunt but likeable Calvin (Ice Cube). The story focuses in on the gun violence that often permeates the streets of Chicago (a subject that few movies dare to address). As Calvin states, “The streets are talking. They’re tired and angry.” Many of the barbershop’s employees fear for their lives on a daily basis and Calvin even has a sign on the wall that notes “No guns allowed.” When customers bring them in, he secures them to prevent bloodshed at the barbershop, a place that the wisecracking Eddie (Cedric the Entertainer) notes, “used to be a place for peace.”

Instead of delving into a debate on gun control (a polarizing debate, to be sure) the comedy focuses in on what these characters can do to improve their neighborhood. As one character notes, “Maybe we need to stop waiting for the government” to solve the issue of gun violence. The barbershop’s employees band together to support a weekend of peace where the streets of Chicago are free from the routine violence that threatens their daily lives.

Admittedly, some may object to the film’s language (it’s not for everyone) but on a larger scale, this is a movie that aims for the higher goal of starting a conversation in a palatable way that doesn’t alienate both sides of the political issue.

It’s hard to know how Stone’s new movie about Snowden will depict the former NSA employee and it’s tricky to make predictions on Ferrell’s new comedy (although it’s hard to hold out hope for that venture) but right now, Barbershop: The Next Cut is currently proving that a big Hollywood production can take on a controversial subject without being politically polarizing. One only hopes that more people take notice.

The Supreme Court Commission Has Finished Its Report. Here's What It Concluded About Court Packing.
Townhall
'Spontaneous combustion is real': NYT can't quite make connection between flaming Fox News Christmas tree and guy in police custody
Twitchy
Latest Poll Numbers Spell Doom for Democrats — and Bust Some Narratives Along the Way
Redstate
The Morning Briefing: The Sweaty, Gross Democrat/Media Lovefest Gets Even Nastier
PJ Media