The Boss: Vulgar Comedy one of the Year's Worst

John Hanlon
|
Posted: Apr 08, 2016 10:40 AM
Share   Tweet
The opinions expressed by columnists are their own and do not necessarily represent the views of Townhall.com. 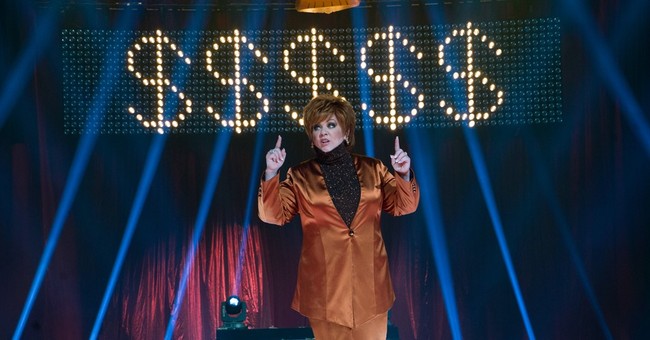 The new comedy The Boss begins emphatically as a showcase for its star Melissa McCarthy. After a few brief scenes showing a younger version of her character being rejected time and again from foster homes, it’s time for McCarthy’s show to begin. McCarthy emerges onstage with a rock star-type following to great fanfare as Michelle Darnel, who we’re told is the 47th richest woman in America. She’s standing in front of a crowd of hundreds who look to her as a business icon who is spreading her story of success to her legions of fans.

McCarthy embraces the role exuberantly but unfortunately, the script is so crass, grotesque and vulgar that her talent gets lost in the morass of this motion picture.

Much of the movie focuses on Darnell after her fall from grace. The successful businesswoman mistakenly engages in insider trading, leading her to prison and her company into the hands of a business rival named Renault (Peter Dinklage). When Darnel leaves prison — clearly unchastened by the experience — she seeks refuge at the home of her former assistant Claire (Kristen Bell).

There, she finds out that no one really liked her abrasive personality and that she’s truly lost everything (“Martha Stewart got everything back,” she whines, making one of the feature’s few semi-contemporary references.)

With everything gone, Darnel finds herself back in business when she decides to lead Claire and Claire’s young daughter Rachel (Ella Anderson) into a brownie business where “Darnel’s Darlings” – a Girl Scout-like troop of predominantly angry young women — sell brownies door to door.

The film’s concept offers rife opportunities for McCarthy to deliver her distinct brand of humor — a brand of physical comedy and silly antics that previously elevated movies like Spy and The Heat. Instead, the comedy here is more akin to that in Tammy, which was a vulgar showcase for its leading lady.

It comes as no surprise that director Ben Falcone — McCarthy’s real-life husband, who has played a supporting character in many of her films — directed Tammy. In both films, vulgarity and obnoxiousness replaced smart humor with low-brow jokes and vulgar antics.

Here though, the movie’s outrageousness feels even more foul considering that Darnel spends much of her time lecturing young women in the brownie business. Darnel’s vulgar language isn’t funny to begin with and it’s even more unsettling when young women begin to mimic her. There’s even a time here when Darnel’s Darlings engage in an ugly street fight with a troop of rivals who are trying to see cookies door to door.

The potential for this story to really work was there. The screenplay by McCarthy, Falcone and Steve Mallory offers a reasonable outline for a funny comedy that explores a successful businesswoman’s attempts at a comeback. In telling the story though, the scriptwriters were seemingly satisfied with the most disgusting or lowbrow joke they could find. There are a lot of jokes about lesbianism here and about sexual organs. There are a lot of jokes about profanity and violence. But there aren’t a lot of jokes that really work.

Like other raunchy movies, The Boss offers a warm-hearted third act where terrible characters try to find redemption. Such scenes feel out-of-place in a movie that is overwhelmed with nasty insults, crude behavior and hateful characters. I wish that the filmmakers here had realized how to make the most out of McCarthy’s tremendous talents as a comedic performer but they settled for a lot less than what McCarthy and this set-up deserved.