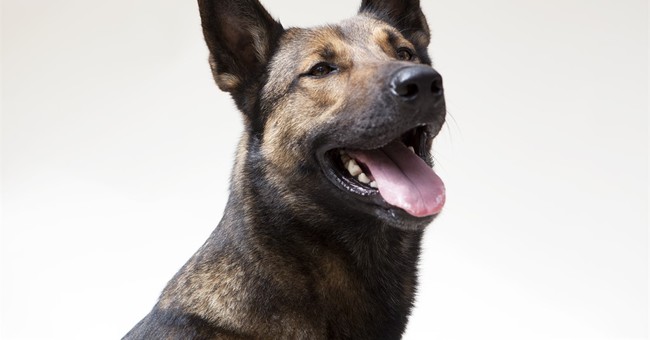 At the beginning and end of the new family drama Max, the filmmakers tell us about the importance of military dogs. In text appearing during the opening moments , it’s noted that over 3000 dogs have served in Iraq and Afghanistan and that dogs have been used in the military since World War I.

The film hopes to honor that— and properly does so— but then unfortunately loses its stamina in a silly subplot plot about weapons being smuggled from war zones into the United States.

Early on in the story, military hero Kyle Wincott (Robbie Amell) is killed overseas during combat. His parents Pamela (Lauren Graham) and Ray (Thomas Haden Church) are struggling with their loss alongside their impetuous younger son Justin (Josh Wiggins), who would rather spend his time illegally copying video games than doing anything productive.

At Kyle’s funeral, Max— the search dog that Kyle had trained for combat— returns to the United States. Max climbs onto Kyle’s coffin during the funeral, hoping to see his master once again. The military prepares to send Max back into combat but quickly realize that Max suffers from post-traumatic stress disorder and can’t serve anymore. He’s been running away from loud noises and explosions. Instead of letting the dog be put to sleep, Kyle’s family adopts him and Justin begrudgingly becomes his caretaker.

Writer/director Boaz Yakin clearly has his heart in the right place making this movie, which nicely honors the sacrifices that veterans and military dogs have made during their service. Few movies have truly chronicled the plight of these animals and Yakin does a nice job showing what they are capable of in war zones and the effects that war can have on them. A scene showing the once ferocious Max recoiling and scared of loud 4th of July fireworks nicely shows that these dogs can suffer post-war in the same way that veterans can.

Where the film falters though is in its generic plot about Tyler (Luke Kleintank), Kyle’s fellow veteran who has smuggled illegally-obtained weapons back to the United States to sell them. During early scenes showing Kyle in combat overseas, it’s hinted that Tyler is up to no good. When he returns to the United States only to encounter an obviously-aggravated Max, we know that he’s being set up as the main antagonist.

Justin begins to doubt Tyler’s intentions and eventually recruits his friends Carmen (Mia Xitlali) and Chuy (Dejon LaQuake) to help discover the truth. That storyline leads to a clichéd dramatic showdown that feels like a tired throwback of an old Lassie episode. Predictably, all of the story pieces come clumsily together leading to the movie’s second half feeling far less dramatic or interesting than its first half.

Max would’ve been better served if screenwriters Boaz Yakin and Sheldon Lettich had showed more confidence in their premise rather than taking it in a melodramatic direction. Justin’s growing bond with Max could’ve been the entire focus on the film and would have improved it considerably. When the duo is onscreen and Justin is coming to grips with his brother’s death, that’s when the film works but when their friendship becomes secondary, the movie quickly loses stamina.

Fortunately, as the credits start to play, a wonderful montage plays showing real videos of military dogs serving their country alongside their patriotic trainers. The entire movie is rightly dedicated to them.

It’s a reminder that this film— despite its obvious plot failings— does us a service in honoring our heroes, human and otherwise.