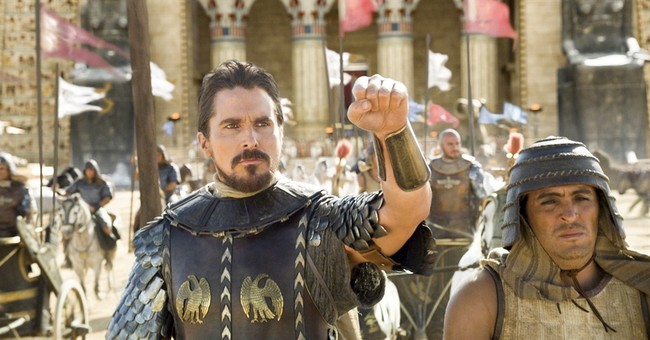 In 2014, Hollywood has embraced telling religious stories on film. No longer, it seems, are religious viewers denied the opportunity to see biblical stories onscreen.

In February of this year, Roma Downey and Mark Burnett brought Jesus’ story to the big screen in Son of God. In March, director Darren Aronofsky presented Noah , which— in spite of its narrative flaws— worked as an epic tale. This weekend, Ridley Scott— the newest high-profile director to embrace this trend— offers up a version of Moses’ story in the new drama Exodus: Gods and Kings.

Regardless of your religious beliefs, this biblical story of Moses leading the Hebrew slaves out of Egypt is a massively engaging one, and one that could easily serve as the basis for an epic film. As a matter of fact, it already did in 1956 where Charlton Heston played Moses to great acclaim in Cecil B. DeMille’s beloved epic, The Ten Commandments.

But times are different now, it seems, and instead of relying on the compelling narrative to tell the story, Scott focuses all of his attention on production values and visual effects. Oscar winner Christian Bale stars as Moses and does an admirable job but Joel Edgerton seems completely lost as the monstrous Ramses, making the figure as superficial and off-putting as the massive amount of make-up that adorns his face. After a rumor spreads that Moses is a Hebrew, Ramses threatens one of Moses’ loved ones and forces him into exile. The superficial scenes between the two (showing their comradery before Moses’ exile) — like so much of the first hour— simply seem to exist to tire the audience out before the plagues begin.

Scott only seems interested in what happens in the second hour of the drama (which, for the record, clocks in at a grating 146 minutes). Some of the effects work but they offer little consolation for viewers who are more interested in substance than style.

Instead, well-known actors— like Sigourney Weaver and Aaron Paul— appear and then seemingly disappear from the drama with little explanation. That only gives more room for Scott to add in unnecessary special effects like a brutal alligator attack and horses being devoured by sharks. What should’ve been a solid religious drama instead sometimes feels like the third installment in the Piranha movie series (now with sharks!).

As for God himself, he doesn’t speak to Moses through a burning bush. He speaks to Moses through a petulant child named Malak (Isaac Andrews), who condescendingly commands Moses to do things he’s uncomfortable with. When Moses is hesitant to follow God’s plan, Malak notes “For now you can watch” and later, when Moses urges restraint, Malak insists that he wants to see the pharaohs on their knees.

Ironically, God is presented as a vicious leader while little is shown of the physical abuse that the pharaohs delivered to their slaves for hundreds of years (when some abuse is shown, it’s directed at a slave who notes that he doesn’t feel any pain). The story of Exodus should’ve been about these slaves escaping their masters but instead Scott misses the main reasons why they needed to escape.

If Hollywood wants to embrace Biblical stories, they should focus on the text and show why certain things— like the exodus itself— were important and necessary, unlike the film Exodus: Gods and Kings, which is a baffling waste of time and talent.