No, LeBron, the Left Uses Sports to Divide the Country

John Dempsey
|
Posted: Aug 10, 2018 12:01 AM
Share   Tweet
The opinions expressed by columnists are their own and do not necessarily represent the views of Townhall.com. 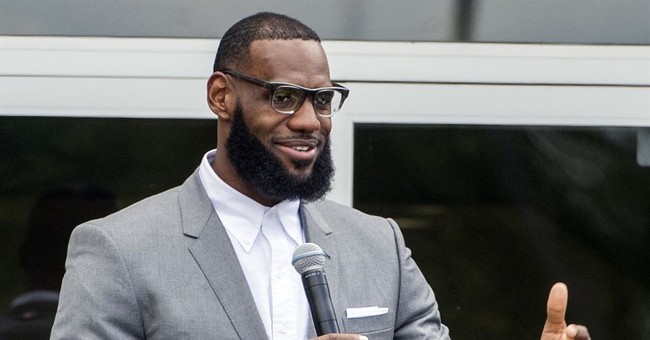 The leftist media is no stranger in attacking President Trump. Often, they will find a big name to interview hoping that the interviewee will verbally attack the president the left hates so much. Usually, the person talking obliges. The media will run the interview for a day or so to create a story.

Last weekend, Don Lemon interviewed basketball star LeBron James about the opening of the I Promise School he started for at-risk and underprivileged children in Akron, Ohio. During the interview, Lemon naturally moved the questioning towards the president. It is no secret that James doesn’t like the president, even though unemployment is the lowest it has ever been for African-Americans since recording the numbers.

Don Lemon asked James what he would say if he was sitting across from Trump. James responded by saying he wouldn’t sit across from Trump, but he would from Barack. James went on to say that he believes the president is using sports to divide the country but didn’t say how.

James had decided to ignore the fact that the left has been working politics into sports well before Trump entered the Oval Office. In December of 2012, Kansas City Chiefs player, Jovan Belcher shot and killed his girlfriend, then himself outside of Arrowhead Stadium in a murder-suicide. After that, Bob Costas gave a father-like lecture on gun control following the incident during halftime.

In 2016, now an unsigned football player, Colin Kaepernick decided he was going to disrespect the American flag and National Anthem by sitting, then kneeling during the ceremony, claiming police brutality was a nationwide issue. Kaepernick’s actions have not unified the country. Instead, he has caused division.

In April of 1947, Jackie Robinson broke the color barrier in Major League Baseball. Robinson was opposed by the left-wing. Democrats pushed back against the decision, snubbing Jim Crow laws. Of course, nearly all African-Americans were in favor, as well as many whites. However, the political opposition could not stop Robinson from making history. The left tried to keep Robinson from playing in the major league. In fact, Robinson’s family was pushed out of Georgia by the Democratic Party. In 1964, Robinson endorsed Nelson Rockefeller and considered himself a Republican.

The left has consistently placed politics in sports arenas. They have caused division with their efforts, not the right. History shows that the conservatives don't force politics into sports, but the left can’t help but use the platform to advance a political agenda. In the process, they have ruined professional football.

Liberals were outraged that Trump didn’t take a snide remark from a basketball player and a left-wing “journalist.” Perhaps, they were trying to create another fake narrative that he is racist because Trump is known to push back.

The typical response from establishment Republicans is “don’t say anything, take the high road” and so forth. Well, the high road didn’t do any good for George W. Bush. All that did was cause his approval numbers to plummet into the lower 20s. Yet, the more Trump fights back the higher his numbers climb.

Sports venues are a way to escape the insanity of incoherent leftist ramblings.

Politics has no business in sports.