John Dempsey
|
Posted: Jun 13, 2018 12:01 AM
Share   Tweet
The opinions expressed by columnists are their own and do not necessarily represent the views of Townhall.com. 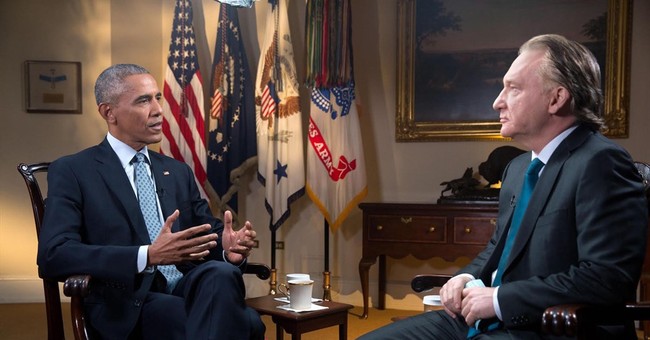 There is nothing like a liberal in a meltdown. On Friday night, billionaire elitist Bill Maher admitted on his show that the economy was doing well under President Trump. However, he wasn’t going to leave it there. Maher went onto say that he hopes for a recession to “save our democracy.” It is unclear how a thriving economy, a strong national defense, and a president shrinking the Federal Government is tossing our democracy down the drain.

Maher, a liberal, is notorious for pushing a progressive agenda. However, the further right Trump moves, the easier it is to see that progressives aren’t progressing anything but a political agenda, not the country.

The Obama era was abysmal. We saw the economy go in the tank. A socialized healthcare bill was signed into effect, taking 1/5 of the United States economy, which was the force in driving our healthcare premiums skyward. But Obama promised us it would push them down, and people believed him. He also worsened race relations. Obama and former Attorney General Eric Holder criticized law enforcement as much as they could, causing riots, and harm to officers and citizens. James Rosen, a journalist at Fox News, was spied on. The IRS assaulted conservative groups. And last but not least, a president who says that it’s normal to cross dress and pretend you are any gender except what you were at birth.

That’s progress? No, it degrades, destroys, ruins, and rots a society and the cultural norm.

Progressive ideology only hurts the people. They curse normal societal behavior and call it “mean.” If anyone pushes back on the progressive movement, they are careless, insensitive and rude.

Bruce Jenner, the leader of the Confusion Movement, has criticized Trump. He has spoken out against the president because he hasn’t received a seal of approval. Trump is not seeking Jenner’s approval. He is too busy building up our military and trying to work a peace deal with North Korea, two topics that are much more important than a man wearing women’s underwear.

The progressive agenda doesn’t matter to this president. The last eight years have exposed the left as crybabies. Their progressive president “fundamentally changed” the United States in many ways. Now, Trump is changing America back. His approval ratings are higher after 500 days in office than Obama and President Reagan. A large number of American citizens didn’t know what Obama meant when he said he was changing America. Trump’s election is an example of an electorate that didn’t like what Obama did to our society and culture, and wanted the exact opposite.

Progressives don’t want Americans to progress in their living conditions. If an American does well in his or her job, they will receive a raise or a better job offer, improving their standard of living. These opportunities are real progress. The individual's life grows, not decays from leftist policies. Instead, the left wants an economic collapse for their political gain. Where's their "compassion" for all Americans?

Maher wants Americans to suffer under another Obama-style recession simply because his candidate lost.

Progressives don’t move anything forward - they hurt individuals and sicken a society and culture.