What Was the Election All About?

John C. Goodman
|
Posted: Nov 12, 2016 9:33 AM
Share   Tweet
The opinions expressed by columnists are their own and do not necessarily represent the views of Townhall.com. 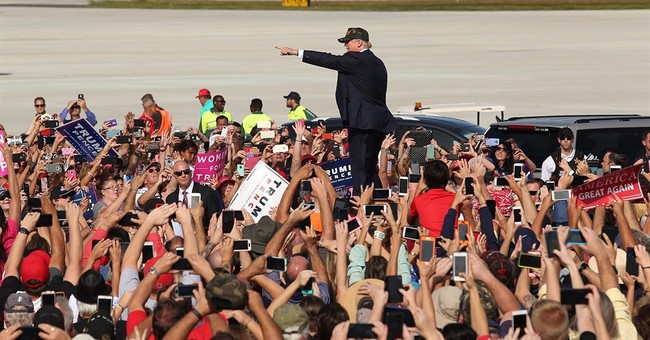 Even before Tuesday’s voters brought a dramatic end to the political career of Hillary Clinton and served up a stunning rebuke to the presidency of Barack Obama, the chattering class had a weird spin on what was happening.

“I can’t identify a single issue … domestic or foreign, in 2016, because no campaign in my adult lifetime has turned so little on policy and so much on character,” wrote Frank Bruni in last Sunday’s New York Times.

Writing in the same newspaper the next day, Paul Krugman claimed that in 2016 all three nightly network news broadcasts combined “devoted a total of 32 minutes to coverage of issues — all issues.”

He appears to be right. As the election was drawing to a close, the Tyndall Report noted that “with just two weeks to go, issues coverage this year [by ABC, NBC and CBS] has been virtually non-existent… No trade, no healthcare, no climate change, no drugs, no poverty, no guns, no infrastructure, no deficits. To the extent that these issues have been mentioned, it has been on the candidates' terms, not on the networks' initiative.”

Of course, if this election was not about issues, one could argue that Donald Trump has no real mandate to do anything.

Here's the problem. The claim that this was an issueless election is only half right. Donald Trump campaigned on issues in every speech he gave – leaving little doubt about how he would go in a different direction from the Obama administration.

Hillary Clinton did not do that. In fact, the entire Democratic Party has mainly ceased to campaign on issues – choosing instead to invest heavily in identity politics. The message to black voters is: vote for us because you are black, not because of anything we are going to do. Ditto for Hispanics. And women. And the LGBT community. And others. Hillary does have an agenda. More on that in a future post. But she didn’t campaign on it.

As for the mainstream media, I have never seen an election in which the media was so biased. And not just biased. The media’s entire view of the election was Hillary Clinton’s view. Even on Fox News, the entire focus on election night and in the days that followed was on identity politics. How many blacks were voting? How many Hispanics? How many women?

As if demography were destiny.

Now, as it turns out, a greater percentage of blacks voted for Trump than voted for Romney. The same thing is true of Hispanics. In fact, Trump did better among minorities than any Republican since Ronald Reagan. He even got a majority of white female votes.

Why were all these people doing something they weren’t supposed to do? On network television and even on cable television, no one had an answer.

Putting the media aside for the moment, do you know what Hillary’s position is on trade deals with other countries? Of course, you don’t. And neither does anyone else. When she spoke about the issue at all, she said one thing behind closed doors and another in public. The reason this doesn’t matter on Wall Street (or to the editors of the New York Times) is that they assume she has no real convictions and that money and special interest influence will always win out.

What about Hillary’s solution to the problem of illegal immigration? Do you know what that is? How about her position on corporate tax reform? Or school choice? Or Obamacare? Or opportunities for blacks in inner cities?

I bet you don’t know her positions on any of these topics. But I bet you do know Donald Trump’s. Not in detail, of course. But I bet you know the general way in which he differs from Obama administration policies.

The fact that Trump has a position, doesn’t mean it’s the right one. On trade, Trump is a mercantilist, just like Bernie Sanders. So was Ross Perot, another remarkable challenger to the establishment two decades earlier. Almost all economists reject mercantilism and support free trade for the same reasons Adam Smith did in his treatise on The Wealth of Nations, more than 200 years ago. Still, mercantilism is definitely a position.

What Hillary Clinton and the editorial writers at the New York Times should have done is defend free trade. After all, they have favored it for the past 30 years. But they didn’t defend it. In fact, in response to Trump’s attack on a wide range of public policies – Democrat and Republican – they didn’t defend much of anything.

Throughout the entire 2016 election campaign, the New York Times ran a front-page story on Donald Trump almost every day. But every one of these articles was a personal attack – portraying Trump as a poor businessman, a tax cheat, a womanizer, a cad. Never once, if memory serves, did the Times run an intelligent piece on the issues Trump was campaigning on.

Identity politics is almost by definition the politics of hate. It is based on convincing people that they have been victims, that they have grievances and that people outside their group are responsible for their suffering. This type of politics necessarily creates its own backlash.

When voters hear speaker after speaker at the Democratic National Convention list all the groups they are for – blacks, Hispanics, women, gays, etc. – they have to be really, really stupid not to notice that if they are a white, straight and male, they are not on the list. No wonder they flock to the other party.

Donald Trump throughout his campaign never said one word that could be characterized as anti-black or anti-gay or anti-Semitic. Even though he was insensitive about Hispanics and Muslims, he made clear over and over that he was not anti-Hispanic or anti-Muslim. Yet he is being accused of arousing hatred in every corner of the country.

Yesterday’s unsigned editorial in the New York Times accused Trump of engaging in the politics of hate. It said an “outpouring of racist, sexist, xenophobic, anti-Semitic and homophobic insults, threats and attacks” were associated with his name. On the opinion page, right-of-center columnists David Brooks wrote that according to his friends and family, Trump’s election was a “victory for white supremacy, … for misogyny, nativism and authoritarianism. Fascism is descending.”

Think about that while you consider some relevant facts. It was Donald Trump who took on the establishment in Palm Beach, a city with a notorious reputation for ugly prejudice that goes back for decades – opening his hotel to blacks, Jews and everyone else. And, in all of American politics you will find nothing more hateful and incendiary that the efforts of the NAACP, the Democratic Party and even Barack Obama to inflame racial passions in order to drive black voters to the polls. They are much worse, for example, than the rhetoric of David Duke. (See “Which is the Party of Hate?”)

Meanwhile, when it comes to ignoring real issues and engaging in school yard taunts, I know of no other publication that comes close to matching the editorial page of the New York Times. Trump’s not innocent on this score. But he at least has something more to say. The Times apparently does not.

While you are soaking all that in, remember who Trump was running against. Twenty years ago, William Safire, perhaps the newspaper’s most prestigious columnist ever, called Hillary Clinton “a congenital liar.” Were he alive today, I suspect that Safire would have seen nothing to cause him to change that opinion.

The differnce is that Safire’s opinions were reasoned and considered. Today’s crop of writers at the Times churn out material that looks like talking points written by the Democratic National Committee. That’s a sad commentary on what we used to call the “newspaper of record.”