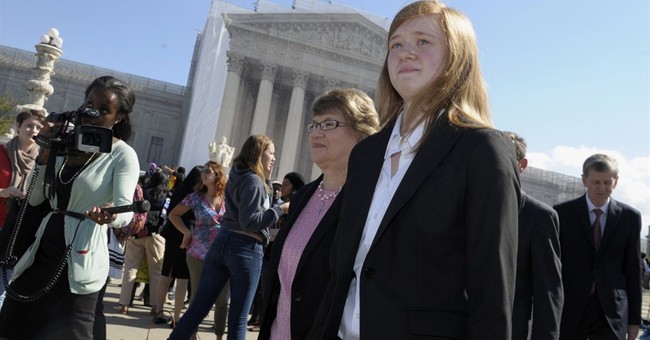 The Supreme Court punted on the University of Texas affirmative action case the other day. But the issue won't seem to go away - except in California. California? Yes, California. Although seen as a bastion of liberalism in the public mind, the state passed proposition 209, banning affirmative action, 17 years ago. So what happened? Are California university campuses today completely lily white? Or all Asian?

Hardly. As explained in a study for the Cato Institute, with the exception of one or two "elite" institutions, California university campuses are more diverse today than before the ban, and the graduation rates of minority students are much higher. But how is this possible if the ban says affirmative action was neither achieving more diversity nor helping black and Hispanic students acquire a college diploma?

That is exactly the thesis of a new book by UCLA law professor and civil rights activist Richard Sander and journalist Stuart Taylor, "Mismatch: How Affirmative Action Hurts the Students It's Intended to Help and Why the Universities Won't Admit It."

[O]f the troubling performance of many black law-school students at UCLA in the late 1990s. About half of them, he found, ended up in the bottom 10th of the class and achieved only a 50% pass rate in bar exams, compared with 90% for whites. The reason? Many had been admitted with large racial preferences. Though a mismatched undergraduate might switch to an easier major without punishing anything more than his dreams, failing the bar exam could ruin a career.

So if the evidence is clear and overwhelming, why are liberals so committed to affirmative action? For white liberals, I think it's all about guilt. Some years ago Ken Pye, who was president of SMU at the time, explained why getting minority kids to the campus was his number one goal.

"White students from middle and upper middle class families can't get a well-rounded education if they only encounter other students who are just like they are," he explained to me. Good point, I thought. But surely black students have legitimate goals of their own, other than providing a richer learning environment for white kids? Is being at SMU, even if they are scoring at the bottom of their class, good for the "beneficiaries" of affirmative action? Turns out that it isn't. And are white kids at SMU even asking for more diversity? Is that a major objective of their college experience? I don't think so.

The pressure for affirmative action comes mainly from the faculty. It seems professors don't like the idea of walking across the campus and seeing no black students. And it turns out that it really doesn't matter who the black students are or where they come from. Although one encounters the inevitable references to the "vestiges of slavery," Henry Louis Gates, Jr. says that less than half of the black students at Harvard are unambiguous descendants of slaves. The rest are foreigners or children of mixed parentage.

While we're at it, the evidence isn't very kind to affirmative action in the workplace either. See the very excellent book on this whole subject by former CBO director June O'Neill and her husband, David O'Neill:

In other words, affirmative action at work isn't correcting a problem because there is no problem to be corrected. By the way, we should all welcome these findings. Granting favors based on skin color should be seen as a clear violation of the 14th Amendment. That it doesn't even help the people it is intended to help means that following the substitution is practical as well as being mandatory.