John Andrews
|
Posted: Aug 31, 2016 12:01 AM
Share   Tweet
The opinions expressed by columnists are their own and do not necessarily represent the views of Townhall.com. 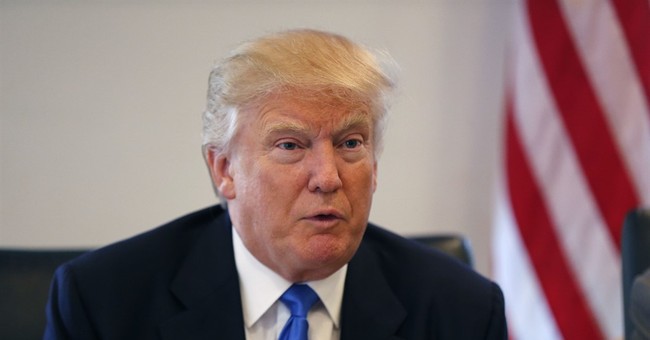 My friend Phil is a pastor in Colorado Springs. His wife Meg is a Christian counselor. Though Phil doesn’t do politics from the pulpit, he told me last week he’s strong for the GOP ticket.

Donald Trump and the Republicans are far from perfect, he conceded. But they’re far preferable to Hillary Clinton and the Democrats, under whom the Supreme Court could veer left for 40 years. And that, we agreed, could doom America’s first freedom, religious liberty.

I asked if Meg sees it the same way. No, replied Phil, and she may not vote at all. Certain that Hillary does not have the character to be president, Meg is concerned Trump doesn’t either.

She says he’s coarse, vain, impulsive, and shallow. She’s troubled by such withering critiques as one by that writer who helped Trump with a book years ago. She might just stay home.

I encouraged the pastor to remind his wife that partisans have been volleying shock-charges back and forth since Jefferson unseated Adams in 1800. We can’t let the personal stuff distract us from how sharply the two major parties diverge on goals for this country.

For those of us who hold a biblical worldview, the divergence starts with this: Republicans understand, and Democrats don’t seem to, that government is not our savior. Government is not God. God is God.

Faithful to Him, a free people forge progress – sometimes by their votes, but mostly by their voluntary cooperation in the economy and the community.

Idolizing politics and politicians, so tempting for liberals and conservatives alike, is what has put us on the wrong track where 75% of Americans now say we are.

Christ-followers like Meg, Phil, and me — maybe like you — face a civic balancing act. We’re dual citizens, residents of both a heavenly eternity and USA 2016.

Scripture warns us not to regard any nation as an unshakable kingdom or an enduring city (Hebrews 12 and 13). But we’re also told to seek the well-being of the place on earth where we find ourselves (Jeremiah 29).

So while I may be all wrong, it seems to me our country’s well-being is better served by an election that puts the GOP back in the presidency while holding its congressional majorities. Here are eight things a Republican win could help accomplish:

1. Protect freedom of religion and freedom of thought. No more harassing churches, religious organizations, and people of faith through the courts. No more anti-religious bullying through schools, colleges, mass media, and pop culture.

2. Laws made by elected lawmakers, not unelected judges. Lifetime Clinton appointees could shred our godly heritage under the First Amendment and our right of self-defense under the Second Amendment. Trump’s announced pool of appointees would respect the Constitution.

3. Economic growth and higher incomes for all. Socialism shrinks wealth. Capitalism expands it. Hillary, lurching left toward Sanders and continuing Obama’s stagnation policies, offers zero hope or change. With a GOP President and Congress, we can make America boom again.

4. True justice for minorities and the poor. Democrats have given us racial polarization, unsafe streets, and inner-city despair. Republicans offer an opportunity agenda to unify instead of divide. The right will empower the disadvantaged. The left only ensnares them.

5. Secure borders for the lifeboat that is America. Only with the rule of law and a vital common culture can Lady Liberty remain a beacon for the world’s downtrodden. Some we can welcome as legal immigrants. Others we’ll help where they are. But letting scofflaws flood in is false compassion.

6. Vigilance against jihad and sharia. Global Islamic supremacism, stealthily gaining here through the Muslim Brotherhood, envisions Islam as America’s state religion. Christians and Jews would have to submit or die. Women and gays would be brutalized. Trump stands against this. Clinton enables it.

7. Disestablish the tyrannous god of secular humanism. Beneath the poison of political correctness lurks cancer: a godless nihilistic orthodoxy endangering our whole way of life. Democrats who boo God’s name and exalt abortion as a positive good, don’t deserve your vote.

8. Keep lawlessness and lying out of the White House. Hillary and Bill Clinton are the Bonnie and Clyde of American politics, riding a lawless thirty-year record of “whatever it takes” to aggrandize themselves and wield power. Coarse the Donald may be; but to hand Hillary the presidency would signal the last days of Rome. We’re better than that.

There’s much more. I haven’t mentioned parental choice and local control of schools, cheap clean energy for everyone, a health care system that won’t spiral down in mediocrity and bankruptcy.

But in a year when neither party or its nominee is what we might wish for, this is the list I urge upon people of faith as the eight eternal rewards of voting Republican,

Eternal rewards for so temporal and tarnished an action as your vote? Really? Not for a minute am I suggesting that the Almighty favors one side in this election. Our duty is to get on His side, as Lincoln said, not presume to have Him on ours. But good deeds are in fact eternal, even as political battles fade away.

America’s not in the Bible, any more than Canada or Mexico is. Yet each doing our small part for our homeland’s well-being, wherever on the globe we happen to live, has immortal significance in the ledger we’ll all be judged by.

Did we seize the moment this year to love our neighbor as ourselves politically? Or did we take a pass? Don’t sit this one out or imagine there’s a third option. There’s not.

To repeat, I may be all wrong here. Winding up our breakfast, the pastor remarked that while he hopes for a Trump victory, sacred history teaches us that perhaps God “in severe mercy” may intend a Clinton victory — either to teach Americans a lesson from adversity or to fulfill some divine purpose we can’t now discern.

Phil and I closed by praying together, “Thy will be done.” So prayed Jesus at his darkest hour, and it has never been improved upon.