Ten Reasons I Switched To Trump

John Andrews
|
Posted: May 06, 2016 12:01 AM
Share   Tweet
The opinions expressed by columnists are their own and do not necessarily represent the views of Townhall.com. 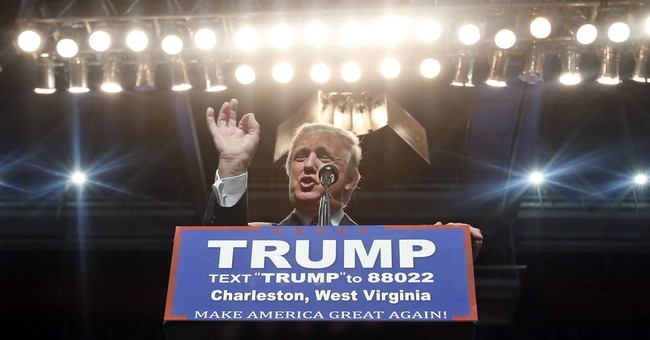 Buckle up, America.  It’s one of those times that try men’s souls. In a few months we have to choose between Hillary Clinton and Donald Trump as chief executive of our government and leader of the free world.  A third choice is less likely than a comet hitting you.  We have those two options, period. So what to do?

As a Reagan-Goldwater-Buckley conservative, active in presidential races since 1960, I started out preferring Gov. Scott Walker or Sen. Ted Cruz.  I know both men, and either would make an outstanding president.  As for Donald Trump, he initially struck me as unsuited for the White House. I vowed on national radio last year that I couldn't ever vote for him. Case closed, or so it then seemed.
Today, however, with the GOP primary electorate having supported Trump in record numbers, making his nomination all but certain, and as we now face the stark choice between him and Hillary — essentially a fifth term for the Clinton-Obama leftists — I have switched.  Without hesitation, in fact with enthusiasm, I am on board with Trump for President.  Here are ten reasons why:
1. Party Priorities: Whereas Democrats in their heart care more about perfecting America, Republicans care more about protecting America.  At this hour of peril, both domestically and internationally, it’s protecting us that matters most.  That warrants voting a straight GOP ticket.
CARTOONS | Tom Stiglich
View Cartoon
2. Congress: For this reason, the U.S. House and Senate must remain in Republican hands.  Rallying to Trump as presidential standard-bearer won’t ensure they will.  But breaking ranks and starting to eat our own can only ensure they will not. It’s hang together or hang separately.
3. Supreme Court: One of those “nine old men” (and women) that FDR talked about has already passed from the scene, and others will before 2020.  Under Mrs. Clinton we’d see the likes of Justice Barack Obama and Justice Eric Holder donning robes to radicalize the court.  Under Trump, no way.
4. America First: Donald Trump has dared speak the long-avoided truth that our country never wins any more.  His inclination toward less going abroad in search of monsters to destroy, in the John Quincy Adams mode, points to a better chance of peace through strength in the Reagan mode.
5. Counter Jihad: After the mad evasions of Bush and Obama under threat from a global movement of jihad and sharia bent on destroying the United States, it’s time for a president who sees the danger and takes the obvious sane precaution: a temporary halt in Muslim immigration.
6. Immigration: A nation unwilling to control its borders can no longer claim nationhood at all. Here too, decades of spineless bipartisan inaction cry out for a president who will finally reassert our sovereignty and common culture by building the Wall and stemming the silent invasion.
7. Identity Politics: Whether it’s “I’m Hispanic so I deserve amnesty” or “I’m female so I deserve the White House,” governance by grievance is killing our free society. Impolite it may be, but Trump’s defiance of the soft Marxism known as political correctness and group rights is a lifeline for liberty.
8. Energy: How crazy, how cruel, to brainwash the world into believing that reduced energy use will lead to higher living standards.  It’s a hoax on the poor especially.  But Clinton and the party of the left want to do just that, in thrall to their green religion.  Trump and the party of the right aren’t having it.
9. Corruption: No racket, no syndicate in American history has ever been so brazen in its pay-to-play methods or so flush with its hundreds of millions in shakedown money as the Clinton Inc. machine built by Hillary and Bill since 2001.  Her email security hemophilia is one side effect. Just say no!
10. Government isn’t God: We’re electing a constitutional president, not a divine king.  The job description is limited, and moral paragon’s not on it.  Americans can do without pious goodness or magic powers in our politicians.  But would you rather have coffee with him or her? Trump any day.

Did I go through some denial?  Sure. Wept in my Starbucks, bummed that all my top choices won’t be on the 2016 ballot. Then I got a grip and switched to Trump.  When the only menu is either socialist malnutrition or populist porridge, “Let them eat cake” isn’t an adult solution. Reflect that President Hillary would be as imperious and out of touch as the late queen who coined that bon mot, and I bet you’ll switch too.