What Era of Responsibility? 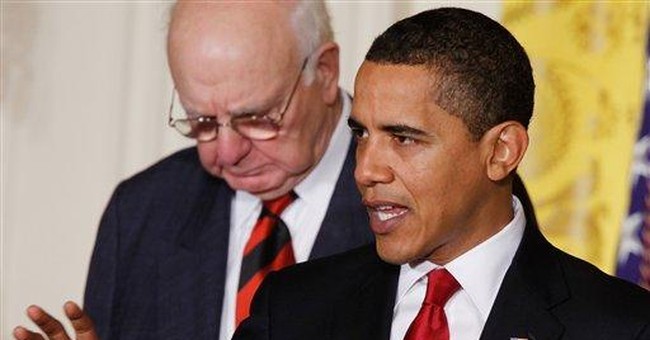 How flattering for a commentator when the President of the United States echoes your stuff. Provided he doesn't then make a mockery of it. On Jan. 20, Mr. Obama and I seemed to agree it’s time responsible America made a comeback. Three weeks in: what a joke.

In his inaugural address, the President called for “a new era of responsibility – a recognition, on the part of every American, that we have duties to ourselves, our nation and the world.” This was not a campaign theme of his, but if sincere, it would have been welcome.

For years, my Denver Post column has called attention to America’s responsibility deficit, our national failure to recognize that we’re all bound in relationships of duty and trust. “It’s time for a new force in American politics,” I wrote in July 2007. “We need a responsibility movement to challenge both parties and reach beyond them.”

My reference was partly to the GOP’s fiscal irresponsibility that had cost them control of Congress and would later cost them the presidency. But as a conservative who preferred McCain to Obama and other Republicans to McCain, I didn’t expect to applaud the incoming Democrat. His responsibility message sounded good, though. We've since seen how credible it's not.

President Obama says he will convene a “fiscal responsibility summit” to head off the entitlement train wreck impending with Social Security and Medicare. As a senator four years ago, he gave President Bush no help in a similar effort, but that was then. If Obama can bulldog Democrats and the senior lobby into accepting reforms, it will be a new era indeed.

While the inaugural had its debatable points, irresponsible rhetoric was absent. He had qualified praise for market economics, pledged “to spend wisely,” and said “programs will end” if they don’t work. Hmmm; time will tell. The reckless stimulus bill, long on statism and short on stimulation, is not a good start.

That day he did not equate our economic situation with the 1930s, which is sensible since it’s still less severe than the early ‘80s. He blamed “our collective failure to make hard choices,” not capitalist villainy. But he has since suggested making profits isn’t responsible. Fasten your seat belt.

To the jihadists (regrettably not named as such) with whom “our nation is at war,” he vowed on Jan. 20: “you are on the wrong side of history… we will defeat you.” In these words, as in the makeup of President Obama’s national security team, there was notable continuity with President Bush’s legacy. The next day, however, an opposite policy of coddling terrorists and appeasing our enemies began to emerge

In Obama’s renewed promise “to begin to leave Iraq” there was the key word “responsibly” – really the least he can do. We can only hope. He churlishly omitted any tribute to the brave Iraqi people and the noble US-led coalition that liberated them.

We must “set aside childish things,” urged the new president, quoting St. Paul. His allusions to race were statesmanlike, in contrast to the ungracious remarks of Rev. Joseph Lowery. Obama’s measured tone signaled no polarization of left and right. Less becoming was his juvenile swagger later in the week, calling out Rush Limbaugh and blurting to GOP congressmen, “I won.”

So we’re left wondering: was that Scripture mere garnish? Is the “era of responsibility” for real, or a cynical leftist’s misdirection? Maybe he just needed a substitute slogan after Lincoln’s “new birth of freedom,” the theme advertised earlier, was dropped. (Surely it didn’t flunk with focus groups?)

“Remaking America,” another potent phrase from Jan. 20, could easily become a pretext for all manner of utopian irresponsibility. Such irresponsibility could include emboldening radical Islam, muzzling broadcasters, rigged union elections, climate hysteria, amnesty for illegals, unethical cabinet officers, endless deficits and bailouts. All may now await us.

Obama’s words in the lofty inaugural left room for either scenario. But his actions in the first month have veered down the irresponsible road. And this vague notion of “duties to ourselves, our nation and the world” hints of unlimited government.

Remember when Michelle Obama said if we let Barack lead, he’ll make demands on us? Honestly that concerns me. It would concern George Washington, whom the smooth-tongued Messiah invoked. I wish our new president had specified personal responsibility, whereby free men and women make their own choices and take the consequences.