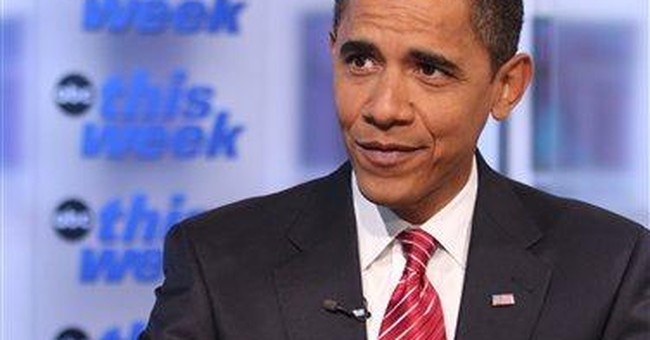 “If it is to be, it is up to me.” Those ten two-letter words express one of the most powerful ideas you’ll ever hear, the black pastor said. They got him through time and again when his life was on the line in the civil rights struggles of the 1950s, he recalled.

As the old man told his story to a college audience that day in the ‘80s, lives were changed. I know mine was. His Christian faith was deep, but this declaration of self-determination wasn’t religious. It exemplified an ethic of personal responsibility that anyone can freely choose. What a keynote for 2009.

The new year finds our country in a tough recession and on tricky ground politically. Democrats’ control of the executive and legislative branches carries the danger of overreach and the risk of people relying too much on government. Republicans’ exclusion from power may tempt them to sulking and sour grapes. Expecting more from ourselves individually is the right resolution for all of us this January.

Few of us could name the president of India or the junior senator from Vermont. We don’t know because we don’t care. How much more does it really matter – be honest – that Obama will be US president the next four years, or that New York's next junior senator will be around for at least the next two? Politics is important, but it’s not the end-all. Thinking it is can paralyze us.

Is there fascination in short-term stories like the scramble to replace Sen. Hillary Clinton, Congress convening, and Barack Obama’s inauguration? Sure. But for perspective, we should also focus on longer-term goals. I’d urge fellow conservatives – and open-minded liberals – to set four goals for the coming four years, none of them dependent on electoral majorities.

By 2013, we can be an America that thinks differently about defense, learning, dignity, and decency. This would so alter the political playing field that both parties must change accordingly. New thinking could reveal new possibilities and raise up new leaders. Here’s a sketch.

One: A Churchillian defense alarm is needed. Neighbor to neighbor, the word must go out that radical Islam is no less a threat to our survival than Nazism and Soviet communism were. Patriot voices must warn of the aggressive aims of Russia and China. The choice is awakening or servitude.

Two: A parents’ revolt against classroom fraud is imminent. Downfall awaits the naked emperor of teachers unions that don’t teach and college faculties that indoctrinate, all at gold-plated prices. “Let our kids learn” is the new civil rights battle cry. Who will light this tinderbox?

Three: Let a reborn belief in the dignity of work, saving, sound money, and self-reliance arise from the economic ashes of 2008. Hold up deficits, debt, inflation, and something-for-nothing to public shunning. Away with economic make-believe.

Four: Americans know decency when they see it, and many want to see more of it. What corrupts children, demeans women, degrades men, divides families, and corrodes civilization doesn’t belong in the public square. Marginalize it with shame, not laws. It’s time to retire political correctness and bring back old-fashioned disgust.

Noble ideals of goodness, the dignity of a dollar earned, the honest love of learning, and the warning to all enemies, “Don’t tread on me” – such attitudes used to be as American as the flag and as bipartisan as the Bill of Rights. Why can’t they be again? If we worked as hard at spreading them as we do at electing candidates, they could.

True, attitudes change slower than policies. Obama’s first 100 days will bring policy changes we may not like. It could be a long four years. But our four goals have the facts on their side, and facts are stubborn things. My old pastor friend would say it’s up to us.