Dare You to See "American Carol" 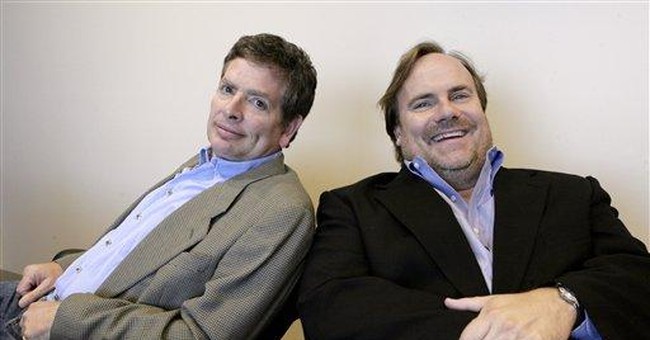 No, it's not a dream. Hollywood really has released a feature film (no mere documentary, an in-joke you'll appreciate after seeing this piece of work) that hoses down with merciless ridicule such richly deserving targets as...

Hollywood itself, the ACLU, leftist universities and their perpetually juvenile faculties, radical Islam, the anti-war movement, Obama's negotiation fetish, the demonizing of Christians, gun control, gay rights, Katrina guilt, Cuban health care, wimpy Democrats claiming to revere the macho JFK, slavery, handicapped kids (okay, maybe not all the targets are deserving, but this is a David Zucker movie after all), Michael Moore in love with himself, Rosie O'Donnell confronting Bill O'Reilly, and Leslie Nielsen as a dirty old man.

It's all jammed into, and spilling out around the edges of (like our favorite radical documentarian overflowing a theater seat), "An American Carol," now in theaters.

Watching the slovenly, America-hating Moore, or "Michael Malone" as the Kevin Farley character is called, get figuratively and literally slapped around for 110 minutes in this campy tribute to Dickens' "Christmas Carol" will do your heart good, especially amidst the headlines about Obama's soaring polls and Oliver Stone's propaganda slam against McCain's predecessor, "W."

There was no doubt Zucker has delivered slapstick as I lost count of the stinging red handprints on Farley's pudgy, stubbled cheek.

Granted, "American Carol" is not in the league with "Airplane!" as a truly zany and outrageous comedy trip from Nielsen and Zucker. This is no cinema jetliner -- it's more of a rubber-band-powered balsa wood job with more chuckles than belly laughs.

But to have Tinseltown heap mockery on liberalism, for once, is so amazing as to qualify with Dr. Johnson's comment about a dog walking on its hind legs: Never mind if it's really done well, you just marvel that it's done at all.

If you're on the right, see the movie and salve your soul. Ten bucks (including maybe a small popcorn, maybe not) were never better spent.

If you're on the left and man enough, take my dare and endure two hours in the George Patton (Kelsey Grammer) and George Washington (Jon Voight) reeducation camp for woolly-headed utopians.

If you're in the center, give "Carol" a try just for the fun of it. I promise you'll never waste time or money on another Michael Moore celluloid abomination.