Joel Rosenberg
|
Posted: Jan 27, 2017 12:01 AM
Share   Tweet
The opinions expressed by columnists are their own and do not necessarily represent the views of Townhall.com. 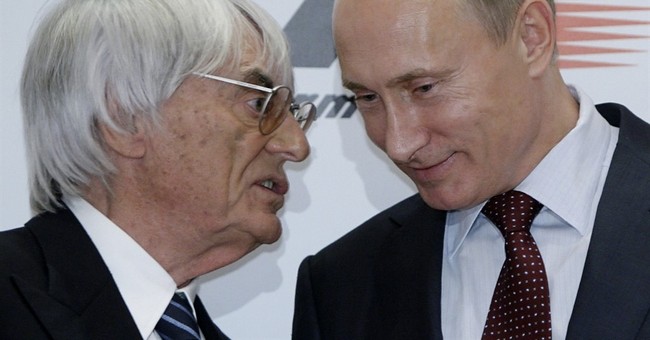 During the campaign, candidate Donald J. Trump rightly warned that America’s friends “are beginning to think they can’t depend on us” while “our rivals no longer respect us … [and] think they can get away with anything.”

In his inaugural speech, President Trump wisely vowed to “reinforce old alliances and form new ones” in light of current and emerging threats.

Trump is moving quickly to keep this promise. On Friday, he will welcome the first foreign leader to the White House: British Prime Minister Theresa May.

Among the topics the two plan to discuss: how to strengthen the “special relationship” between the U.S. and the U.K., and strengthen the NATO alliance amidst current and emerging threats. Among their most serious challenges will be dealing with the increasing aggressiveness of Russian President Vladimir Putin.

Unfortunately, in the U.S., the subject of Putin has become the subject of bitter partisan wrangling, especially after allegations that Moscow tried to interfere in the American elections. But Russia should not be treated like a political wedge issue. The stakes are far too high, and Americans of both major parties are deeply concerned by the growing challenge posed by the Kremlin.

Consider the results of an exclusive new survey conducted by John McLaughlin, the respected American pollster. At my request, John and his team asked 1,000 American voters two questions concerning their views of Russia.

First: “Do you agree or disagree with the following statement? In light of Russia’s invasion and seizure of Crimea in southern Ukraine, Russia’s invasion of the country of Georgia, Russia fighting alongside Iran to defend dictator Bashar Assad in Syria, Russia’s continuing sales of arms and nuclear technology to Iran, and reports of Russian hacking of American computer networks, I have come to believe that Vladimir Putin and the government of Russia pose a clear and present danger to the national security of the United States, our NATO allies in Europe, and our Mideast allies, such as Israel.”

The results were overwhelmingly bipartisan. A stunning 71 percent of Americans said they believe Putin and Russia pose “a clear and present danger” to our security and that of our allies. Only 14 percent disagreed. The rest said they did not know.

A remarkable 75 percent of military households said they regard Russia as a “clear and present danger.” So did 71 percent of Evangelicals, and 66 percent of Millennials (aged 18-29).

The second question focused more on how Americans feel about the threat. We asked: “Which of the following statements is closest to your personal views about Russian President Vladimir Putin?

A)    Mr. Putin worries me. Like Russian Czars of the past, he wants to regain the glory of Mother Russia by expanding the territory and influence of Russia in Europe and the Middle East, including by military force. Unlike the Czars of the past, he possesses a nuclear arsenal. If Mr. Putin is not contained by a new and very firm American and NATO policy of  ‘peace through strength,’ I am worried he will continue to bully, blackmail and invade more countries and pose a far greater danger to America and our allies.

B)   Mr. Putin doesn’t worry me. All the talk of him being a ‘serious threat’ to the U.S., NATO, or our allies in the Mideast like Israel is overblown. Yes, he has sent Russia’s military into Ukraine, Georgia and Syria, but I am not worried he is going to bully or invade other countries, and I do not believe Mr. Putin poses a real danger to U.S. economic or security interests.”

Here the partisan spit was rather pronounced. Almost eight-in-ten Hillary voters (77 percent) said Putin worries them. Not surprising, given the highly publicized charges that the Kremlin hacked the Democratic National Committee’s computers and tried to influence the American people against Hillary.

However, fewer than half (45 percent) of Trump voters described themselves as “worried” about Putin, while 28 percent said they are not worried. This should not be surprising either. While Trump’s supporters see Russia as “clear and present danger,” they have more confidence that the president and his national security team will handle the threat appropriately.

That said, it’s worth noting that one-in-four Trump voters (27 percent) say they “don’t know” if they should be worried about Putin or not at this point.

Like our allies, millions of Americans – both Republicans and Democrats – are waiting to see how their new president handles the Russia question. The first real clues may emerge from Trump’s meetings with the British prime minister this weekend.