Joel Goodman
|
Posted: Jan 10, 2017 1:26 AM
Share   Tweet
The opinions expressed by columnists are their own and do not necessarily represent the views of Townhall.com. 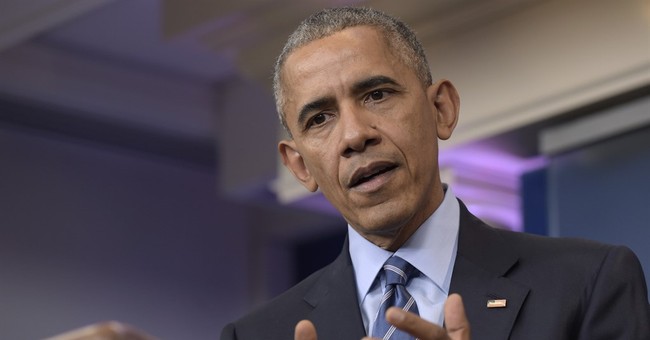 Had Obama intended to make the Presidential transition as smooth as he said he would, he would ask his base to refrain from protesting the inauguration. The obvious contradiction is that he is the only President in memory who has bothered to say that he would make the Presidential transition as smooth as possible - when to the contrary, he has thrown roadblocks in front of Trump's future policies wherever he can.

Saying one thing and doing something else is not unusual for Obama, as he has previously lied shamelessly with a straight face,  tailoring his speech with a deceivingly benign academic presentation. He has been able to beguile his cult followers because they want to believe in him as a crusader for justice. That his followers may be willing to drink the Kool-Aid is worrisome. We are at a precarious moment when an activist ex-President will have at his disposal the loyalty of a devoted following.  Obama's off-hand remark about being popular enough to have won a third term, was much more serving of an agenda than one might suspect. To have his agenda succeed, Obama must alienate as much loyalty from the new President as he can.

The new message of a soon to occur Trump caused American doom, was introduced by Obama's wife, who said "Now we’re feeling what not having hope feels like."

Along with Michelle's warning about the beginning of a dark period in our history, there has now begun the creation of a much more dangerous narrative - that Donald Trump and his cabinet are dangerous, possibly supporting Russia's Putin to the point of treason. The great Irony here is that these accusations come from an administration that was populated with hard core Socialists, admitted Communists, admitted liars, anti-Western, anti-Christian, anti-Israel, pro-Radical-Muslim people, who have made decisions over the past eight years that have undermined the security of this country.

Aside from issue of the source of the hacks, no distinction has been made between a hack for information and a hack intended to exert influence - an important distinction if, in fact, there was some sort of state sponsored Russian action. Espionage is very different from covert operations and dirty tricks.

The expulsion of the Russian support staff in the United States is the required set-up for the treason narrative that is at play. This message is being readied for an opportune time to disseminate a call for impeachment - regardless of its potential for success, possibly just ahead of the 2018 midterm elections.

All that is required for the spin to start is for Trump to invite the ejected Russians back to the U.S.. The movement to impeach is already beingpromoted by Robert Kuttner, accredited journalist and founder of The American Prospect

CNN's Jack Tapper had White House Homeland Security and Counterterrorism Adviser Lisa Monaco on his show, and she described the sanctions as imposed on:

"....both the military and civilian intelligence services in Russia, in response to their malicious cyber activity and efforts to interfere in our elections. "

If Julian Assange is lying, and it could be proven that Russia had intentionally tried to influence U.S. elections that might be of some import, but even that would not be unusual, since Obama interfered with Israel's recent elections by sending White House operatives to Israel to try to help unseat Netanyahu.

Tapper went on to suggest to Monacothat the sanctions might only last until Trump is in Office and he then might  invite the Russians to return:

"So, I'm not ... going to speculate... on what the new administration might do. I will say the reversal of sanctions such as what you have described would be highly unusual. Indeed, the sanctions usually remain in place until the activity and the reasons for them being imposed in the first place has been removed."

The actionable statement from Monaco is the inference that a line would be crossed if Trump were to unilaterally lift the sanctions before the "activity" that caused them were stopped; such an action would raise doubts as to Trump's loyalties.

Having ignored the entirety of Russian aggression in the Ukraine, Obama is suddenly confronting Russia,  just as Russia managed to broker a cease fire in Syria, negotiating directly with our NATO ally, Turkey - something we "weren't able" to accomplish.

Putting aside the unusual timing of the expulsion, only weeks before Obama's term expires, Monaco represents an administration that reinstituted diplomatic relations with Cuba without a quid pro quo. Neither was a quid pro quo received when the Iran Nuclear Deal was brokered. It is also disingenuous to hear a complaint about possible meddling in the elections of another country, considering  that meddling in foreign elections of potential adversaries has been a mainstay of American covert foreign policy for years. Destabilizing friendly governments, like Israel,  is something else. Being downplayed is the vulnerability of the DNC's computers, even  after the FBI  notified them about their system's weakness.

If private citizen Obama is to assume leadership of a large segment of the population that has already demonstrated its willingness to go to the streets, it is necessary to develop a narrative that effectively strikes at the core of Trump's legitimacy, alienating the President and serving to justify future protests.

Those who support our Federal Republic can expect rough times ahead if there is a major challenge to our system. Obama's supporters, will not concern themselves with the validity of the accusations, and the corporate news media will take the side of the ex-President who will conveniently still be residing in Washington DC.