Open Season on Democrats: No Thrill For Hill 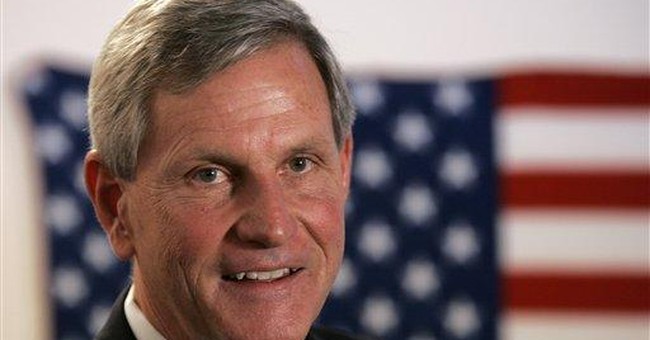 Trending
This is part of a series that Townhall.com's National Political Reporter Jillian Bandes is doing on electorally vulnerable Democrats called "Open Season."

Rep. Baron Hill (D) is a textbook case of a Democrat who is going to lose his seat when he comes up for re-election in November. His eleventh-hour health care vote-flip was just one of a number of issues that place him far to the left of his moderately conservative Indiana district.

Hill didn’t support Obamacare until three days before the vote, when he decided that the executive order signed by President Obama was good enough to oblige his pro-life convictions. The Indiana Right to Life, an anti-abortion group, quickly pulled their endorsement from Hill and two other Indiana Democrats who voted for the bill, and Indiana’s largely pro-life voting bloc will be the final judges when the polls close on November 2.

Hill also voted for every federal bailout that Nancy Pelosi asked for, and has a soft spot for "green energy" funding, which opponents say will suck jobs from unemployed Indianans. Hill is also a longtime backer of cap-and-trade, another jobs-killing piece of legislation.

“He supported a big government, big spending, high tax, statist agenda, and those sorts of policies are incredibly out of sync with the Indiana’s ninth district electorate,” said his GOP challenger, Todd Young. “This is a conservative district, full of conservative, patriotic people, who like to take control of their own lives.”

Hill’s approach to the health care town hall events last August was a national laughingstock, as he told a constituent that “its not your town hall meeting, it’s mine” after the constituent raised a contentious point. During that same town hall meeting, Hill said he hoped the incident wouldn’t "wind up on YouTube” and put him in a compromising position – in other words, Hill wanted to prevent the exchange from going public. Unfortunately for Hill, the ensuing YouTube video of the event received over 200,000 views.

“If you said something they didn’t like, you were shut down,” said 9th district resident and Young supporter Deb Johannes, speaking about the town hall meeting. “[Hill] would give a non answer and then move on to somebody else.”

Johannes said the “plants” at the meetings were “obvious,” in that Hill had stacked the crowd with Obamacare supporters who were guaranteed to ask softball questions and make the Congressman look good. But time and time again, Hill has come out looking like nothing but a buffoon. Hill’s staff has also been evasive when constituents have tried to place phone calls and inquire about legislation.

“I called his office sometimes weekly, in the past, and they don’t respond to calls,” Johannes said.

McCain won the district by a 2 point margin in 2008, but this pro-life rural area is known for shifting with the political tides. Hill matched up with GOP contender Mike Sodrel four times in a row, and Young’s triumph over Sodrel in the primary seemed to indicate that voters were looking for a fresh face. Republicans are hoping that the need for a fresh face will carry over from the primary election into the general election.

“Hill can't be considered much of a favorite in this climate,” writes analyst Charlie Cook. “As Hill's loss to Sodrel in 2004 showed, just the slightest national breeze can loosen Democrats' grip on this seat.”

Young, of course, is chomping at the bit to take down Hill on November 2. He’s specifically pushing an agenda of fiscal conservatism, and aggressively attacking Hill’s support for cap-and-trade.

“My message is resonating with conservative voters of all political stripes. We started very early, and we worked very hard to build a presence in each of the 20 counties,” said Young. “We’ve raised a whole lot of money from small dollar donors. There’s an anti-incumbent, anti-Washington sentiment prevailing in Indiana.”