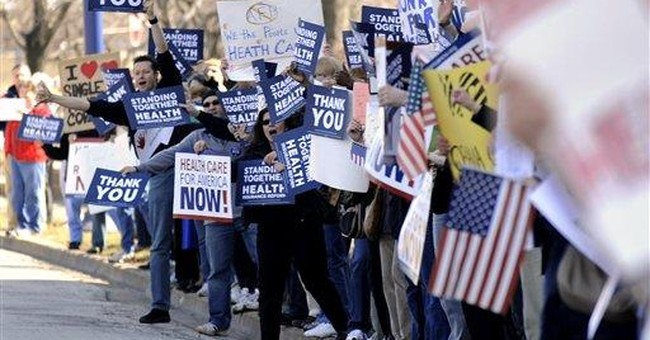 As cost estimates for Obamacare are released, Democratic sales tactics have shifted from saving America to just saving America’s youth. That’s ironic, given that young people are the ones who stand to suffer most from the current legislation.

Last week, House Democrats used Marcelas Owens, 11, to talk about the death of his mother and how Obamacare would’ve helped her (it wouldn’t have). Yesterday, House Speaker Nancy Pelosi used a gaggle of college students as her backdrop to push for the bill’s passage.

If you look at the young people standing behind her, you’ll see their faces aren’t reflective of the group of Americans that most stand to benefit from Obamacare. Perhaps old people are simply not as sexy photogenic as the crowds from Campus Progress and Young Invincibles.

Brian Graham, the state chairman of Florida Young Republicans, says its reprehensible that Democrats would pin health care rhetoric on the backs of America’s youth.

“Young people should be most outraged and most concerned about this bill. It’s their future that’s being spent away. It’s their health care that’s being tampered with,” said Graham. “We are the ones that will have to wait in long lines, and have government bureaucrats tell us what treatments we can get.

Daniel Head, the vice chair of communications for the District of Columbia Young Republicans, said that assuming young people would benefit was a deceptive and well-calculated maneuver.

“One of the biggest things that they don’t take into consideration is the burden of the debt that they’re going to put on our generation. We’re the ones that are going to have to pay for this when all of those in Congress are in dead or no longer in Congress,” said Head.

He also took issue with the most recent development trotted out by Democrats as a reason for Obamacare’s passage: the seemingly deficit-reducing budget score.

““I don’t think most people understand how CBO scores. When you start taxes immediately, then the costs kick in after three or four years, thats not self-sustaining- that's called lying. Usually, they just push all the costs outside the ten year window, that’s when all the debt starts kicking in,” said Head.

That’s right in time for the next generation to start paying more taxes.