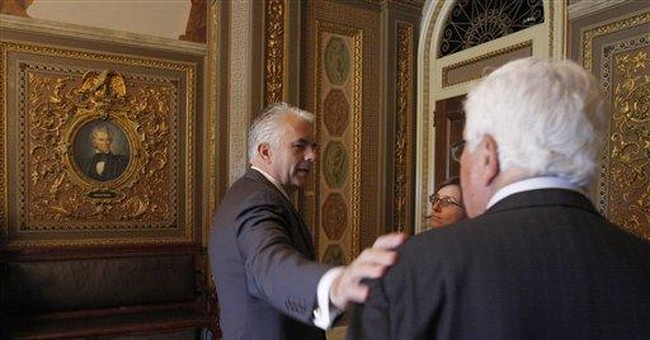 But some conservative women say that men aren’t the only ones to blame.

“The feminist movement has always supported all kinds of free sex,” said Phylis Schafly, President of the Eagle Forum and someone many consider to be the original “anti-feminist.” She said that animosity many feminists have for sexual relationships remaining inside the commitment of marriage is part of the reason these affairs have occurred.

“Feminists have worked hard to eliminate the specific benefits of marriage, and particularly, of the full-time homemaker… they have encouraged very loose morals about sex,” she said.

Schafly blames sex education in a post-feminist world for removing the blame of women from the narrative of an affair.

“It’s certainly the fault of the man. But no one is really telling the woman that they should ‘just say no,’ or that they shouldn’t have sex until they’re married,” she said.

Recent sexual misconduct, such as that publicized through David Letterman or Roman Polanski, have placed even more emphasis on men’s debasement of women. Gov. Sanford proclaimed his love for his lover instead of his wife on national television. Continued blackmail by his lover’s husband has put Sen. Ensign’s potential ethics violations at the forefront of the story while sidelining the crime of infidelity.

But that doesn’t translate into sexism, said Carrie Lukas, Vice President for Policy and Economics at the Independent Women’s Forum.

"We have a cultural problem that has created so many David Letterman or Ensign or John Edward type situations,” said Lukas. "We all need to consider how to create a culture that creates greater respect for women, and for marriage, for that matter so that scandals in which women are used and abused aren't commonplace like they are today."?? ??

Lucas said that sexism and feminism should not be the only lens by which one can look at these stories and call them them problematic. Marji Ross, President and Publisher of Regnery Publishing, had similar thoughts.

“Women from all political stripes can be successful in business, in their careers, in life, in however they define their success,” said Ross. “I don’t think radical feminists have done anything to protect women from those kinds of crimes.”

In other words, insisting that pointing at men as the perpetrators of sexual indiscretions are a convenient excuse for behavior that actually reflects the degradation of society as a whole.

Dawn Eden, author of The Thrill Of The Chaste, points the knife even more directly at feminists, saying that they are directly responsible for the way women are portrayed.

“I would say that feminism actually creates the problem with the men's having affairs... because if feminists hadn't pushed for the Pill, other forms of contraception, abortion, and the morning-after pill as 'sexual freedom,' it would be much harder for men to get away with affairs.”

“Of course, the wives are victims--but there is also the problem in that the mistresses are participating. So it's not just a question of men using women.”