Should the ACORN Sting Videos Be Discounted? 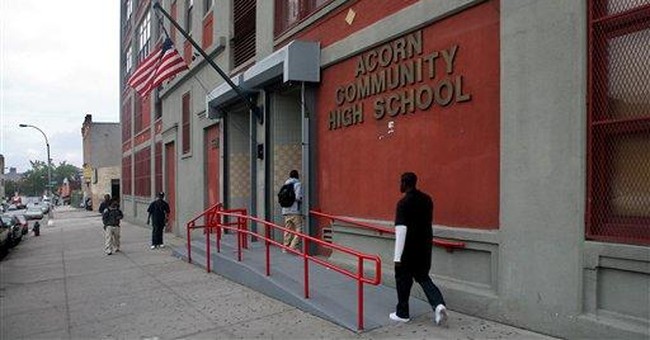 They say that amateur filmmakers James O’Keefe and Hannah Giles were filming with an agenda, so their conclusions can’t be trusted. They say that their taping may breach legal codes that specify individuals must be notified when they are being taped. And they complain about the video’s editing, saying the full tape is needed to make a decision.

“It is worth pointing out that not only are the tactics against the standard of journalism, the lack of disclosure and misrepresentation pushes this expose well out of the range of journalism and in to the realm of entrapment,” said John Ennis, a liberal reality-based filmmaker. “It was planted, nurtured and harvested, the latest to take down an organization that empowers the numbers that vote Republicans out of office.”

Al Tompkins of the Poynter Institute for Media Studies, agrees with Ennis inasmuch as there are ethics questions involved, but says the information contained in the video can’t be discounted.

“For 50 years, we have known that sometimes journalists aren’t the only ones to capture stories. The Zapruder film was shot by guy with movie camera,” he said. “I think its no question that they had an agenda, but I think we all have agendas. What I would say is, we should look at it with that filter – that doesn’t mean that what they captured was irrelevant.”

However, Tompkins said there could be legal issues involved with the taping. Indeed, all three states where O’Keefe and Giles taped – California, Maryland, New York and the District of Columbia - require all parties to consent before any filming occurs. Maryland has already suggested that it might prosecute the two filmmakers.

Lee Edwards, a media expert at the Heritage Foundation, admits that there may be a grey area with the legality of the taping, but doesn’t think the material should be discounted.

“I can think of stories over the years such as the Food Lion scandals, where network employee were able to get pictures of meat that was spoiled. And they didn’t ask for permission, or get releases,” said Edwards. “All the time you’ll see people trying to get a story and being aggressive as possible. These are practices which have been employed by freelancers like these two but by professionals as well.”

Edwards thinks the editing of the tape is also in question, though it’s not an issue for the general public.

“If Congress needed to see [the unedited tapes], that would be useful – the Justice Department, so forth – that would be appropriate to do,” he said.

Tompkins thinks everyone should withhold judgment until the entirety of the tapes is available.

“What are the real tactics they’ve used? All they see is what we see, and we don’t know what else there was or how this came to be,” he said. “Part of truth telling is putting facts in context. What they’ve got is damning-looking, for sure. But we don’t know how that happened.”

He also thinks another factor may have been in play.

“Acorn makes itself news. It’s not just a low profile group that has never sought attention,” said Tompkins. “It’s the old saying, the fleas come with the dog.”