From the Economy to Protests, Garcetti Lets Chaos Reign in L.A.

Jesse Grady
|
Posted: Sep 15, 2020 11:58 AM
Share   Tweet
The opinions expressed by columnists are their own and do not necessarily represent the views of Townhall.com. 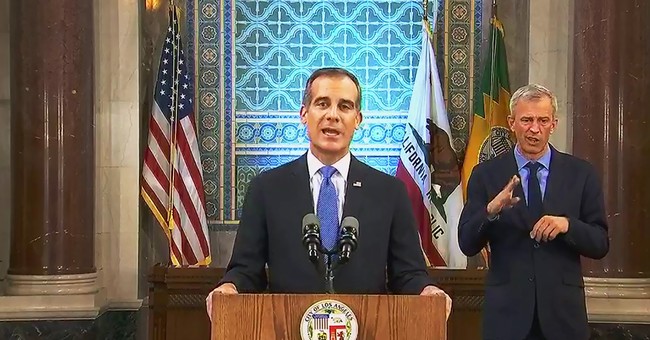 This has been a year of considerable unrest across the United States. The ongoing threat of the COVID-19 pandemic, an unprecedented shutdown of economic activity, and widespread protests have created chaos for months on end, even more so when considering this is all happening during an election year. Perhaps no place in the country, however, has been turned upside down in quite the same fashion as Los Angeles.

Throughout the year, Los Angeles has felt every crisis more than any other city. Over the summer, COVID-19 tests seemed impossible to come by in the city, while data from the Centers for Disease Control and Prevention continues to indicate that Los Angeles County ranks among the worst in the U.S. for total cases and deaths from the virus. Meanwhile, the city is facing a full-blown economic crisis, with unemployment hovering between 15 and 20 percent for much of the summer.

This naturally raises questions of why things have gotten so bad there. The answer, however, is simple: Mayor Eric Garcetti’s disastrous leadership ahead of and throughout the pandemic doomed the city from the start.

We are already seeing the effects of Mayor Garcetti’s failed management. Just last week, he announced that the city’s finances are in grave condition – with city revenues a jaw-dropping $200 million short of what had been budgeted – and warned that city officials should be prepared to handle layoffs.

Of course, this is more than just the result of a once-in-a-century public health crisis, it is the culmination of years of economic mismanagement and abdicated leadership. From failing on his promise to eliminate the city’s business tax to creating ever-looming budget deficits, Mayor Garcetti set the city up to fail. It is unsustainable, and the city’s economy will be feeling the pain of his failures for years after his tenure as mayor comes to a close.

Beyond that, Mayor Garcetti has allowed social protests to spiral completely out of control in recent weeks. His lax approach to handling the violence surrounding these protests has allowed them to wreak increasingly greater havoc on the city, coming to a head recently when two officers were shot in Compton, only for protestors to block the entrance to the emergency room and repeatedly yell “we hope they die.”

When considering all of this, it is no wonder why there is a growing movement to recall Mayor Garcetti and pull him from office before he can allow this chaos to grow any further.

Despite all of this, however, former Vice President Joe Biden is still bringing him close to his presidential campaign. This is a simply mind-boggling move to say the least; Mayor Garcetti has proven woefully inept at running his own city, so why would the Biden campaign want to only bring him in closer?

From completely mismanaging the city’s budget to mishandling the COVID-19 pandemic and now even turning a blind eye toward violent protests, the Biden Campaign’s association with Mayor Garcetti can be seen as little more than a liability. Centrist voters will play a major role in the upcoming election and bringing Garcetti closer will only drive those voters away.

The several simultaneous crises that 2020 has presented us with have both elevated strong leaders and exposed weak ones. In every way imaginable, Mayor Garcetti has been one of the latter. Los Angeles has been left reeling at every turn, and in every instance the blame can be focused squarely on Mayor Garcetti’s failure to rise to the occasion and protect his city.