Jerry Rogers
|
Posted: Jul 11, 2016 10:27 AM
Share   Tweet
The opinions expressed by columnists are their own and do not necessarily represent the views of Townhall.com. 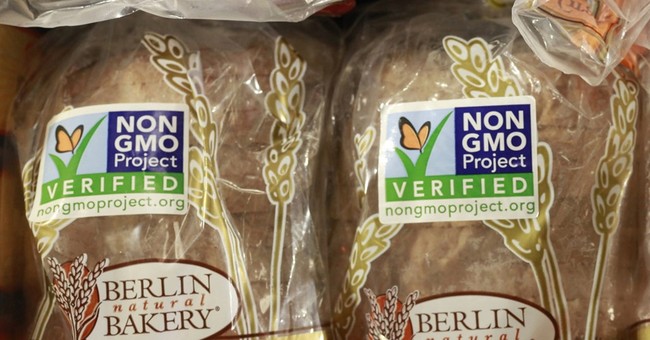 In a rare instance of common-sense bipartisanship, the U.S. Senate voted last week 63-30 to pass a biotech labeling bill—Roberts-Stabenow—that will protect consumers, advance free market principles, and support sound science. The legislation now heads over to the U.S. House of Representatives, which passed a voluntary GMO labeling bill last year.

The House is under pressure to pass the measure before it leaves for the August recess, July 15. To date, more than 50 bills have been introduced in dozens of states to require the labeling of genetically modified foods, or GMOs. In an affront to Federalism, a Vermont law took effect on July 1st usurping the power of the U.S. Congress to regulate interstate commerce. If the House fails to act, Vermont and other states following suit will upend the nation’s entire market system for food, from farming to supply to retail.

A patchwork of state-based labeling regimes will create mass confusion among consumers and cause food prices to skyrocket. Already in Vermont, over 3,000 products have been removed from grocery stores. Vermont families are finding fewer choices at higher prices while small businesses are seeing higher costs. WCAX reported “the average Price Chopper sells 35,000 items. Losing 3,000 is 10 percent of their inventory, leaving some experts to worry whether less competition will breed higher prices.” Robert Letovsky, a professor of business at St. Michael’s College, said “You now have less choice for consumers. Less choice means less competition, inevitably prices are going to rise.”

The Roberts-Stabenow legislation will prevent the proliferation of costly, unconstitutional state-based labeling mandates. GMOs are among the most analyzed subjects in science. With thousands of global studies affirming safety, the science over GM foods is unquestionably settled. The world’s most prestigious science, health, and academic institutions have confirmed and re-confirmed that GMO science does not pose a risk to our health, and GM foods are as safe and/or safer than conventional or organic foods.

The National Academies of Science, in a 400-page report on GMOs released in May 2016, concluded that there is “no substantiated evidence that foods from GE [genetically engineered] crops were less safe than foods from non-GE crops.” The study examined questions like: Are GMOs safe to eat? How do they affect the environment? Do they drive herbicide-resistance in weeds? Once again, scientists could not find a single instance where GMOs posed any harm to humans or animals. GMOs are safe and healthy, period.

Just two weeks ago more than 100 of the world’s leading scientists and Nobel Laureates took a stand against anti-GMO activists who deceitfully battle against the use of GM crops. In an open letter to Greenpeace and other activists, the scientists wrote that the environmental group and its supporters “have misrepresented [GMOs] risks, benefits, and impacts." The letter goes on to state that "scientific and regulatory agencies around the world have repeatedly and consistently found crops and foods improved through biotechnology to be as safe as, if not safer than those derived from any other method of production. There has never been a single confirmed case of a negative health outcome for humans or animals from their consumption."

Yet, activists—like those in Vermont—still sound the anti-GMO alarm, and their failure to consider the science when advocating policy betrays their true agenda. The activists' ultimate goal is not "freedom of choice" or the "right to know" for consumers, as they claim, but to drive GM foods out of the market.

A free market requires a consistent, national labeling system to provide consumers information regardless of where they live or grocery shop. The House must act to pass Roberts-Stabenow. The bill is a critical, market-based proposal that will protect families, farmers, and businesses. The bill does not mandate “GMO warning labels” but rather will implement an innovative Smart Label technology (or QR code) that will offer consumers easy access to detailed information about their food choices.

The Roberts-Stabenow measure is founded on the consumer’s right-to-know, sound science, and free market principles.  If it fails in the House, the anti-GMO activists will continue to stigmatize biotech science through their organized, yet dishonest, campaign of state-based labeling mandates. The results will be higher prices and fewer choices at the grocery store for all Americans.