Jerry Newcombe
|
Posted: Dec 20, 2020 12:01 AM
Share   Tweet
The opinions expressed by columnists are their own and do not necessarily represent the views of Townhall.com. 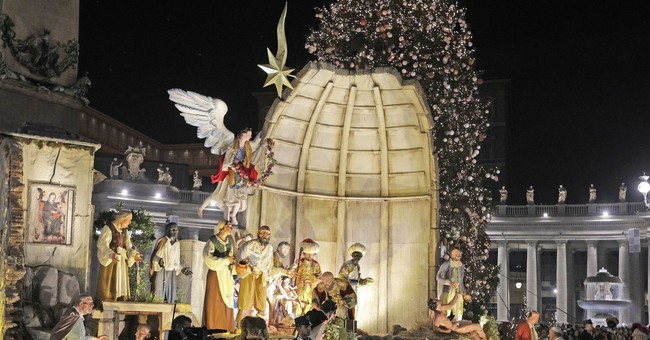 In C. S. Lewis’s book, "The Lion, the Witch, and the Wardrobe," he describes a beautiful place (Narnia) under the spell of an evil character (the White Witch) – who symbolizes the Devil. Lewis writes of her that it was she who has made it "always winter, but never Christmas."

"Always winter, but never Christmas" – what a great phrase to describe this world, without the loving, powerful, and positive influence of Jesus Christ.

Could you imagine life in such an intolerable state where we had to endure the brutal conditions of the winter season – but never having Christmas to look forward to?

Well, this winter, there are some tyrannical state and local officials who are using the coronavirus as a pretext for shutting down churches and family gatherings. To the degree that these regulations are imposed on the people in those states, it will be always winter, but never Christmas. At least this season.

These are the same people who might as well have a sign on their desks for the world to see, declaring, "Do as I say, not as I do."

We’ve all heard the stories of mayors and governors who urge people to stay home while they are out and about getting haircuts, shopping, and eating at restaurants with large groups. One mayor actually recorded a video urging people to stay home at Thanksgiving. The kicker—he recorded it while vacationing at a family timeshare in Mexico. We don’t have to make this stuff up. Thankfully, people are catching on to the hypocrisy.

Meanwhile, the war on Christmas seems to continue this year, as always. Here are just some examples:

• The woke now tell us that putting up Christmas lights demonstrates "systemic biases." An ordinary display of Christmas lights in Minneapolis triggered one snowflake neighbor to write an anonymous letter protesting the non-ostentatious display: "The idea of twinkling, colorful lights are a reminder of divisions that continue to run through our society, a reminder of systemic biases against our neighbors who don't celebrate Christmas or who can't afford to put up lights of their own….We must do work of educating ourselves about the harmful impact an outward facing display like yours can have." As if penning satire, the writer called for shutting down the display to "respect the dignity of all people, while striving to learn from differences, ideas, and opinions of our neighbors."

• Abortion clinic staffers erected a sacrilegious Christmas tree display. Instead of a star or an angel at the top of the tree, they placed a forceps that is used to kill unborn babies. Christmas is all about celebrating the birth of a Baby; instead, abortionists use the celebration to promote their work of killing babies. As Lifenews.com notes of this incident: "It is not the first time abortion activists have sought thrills by mocking Christmas, a holiday celebrating the birth of an unplanned child to a young unwed mother. In 2010, a pro-abortion group sold 'Abornaments,' a desecration of plastic fetal models depicting unborn children at various stage of development before birth, online. Some of the ornaments were plastic fetal models decorated with red noses and reindeer antlers hanging from coat-hangers." Depravity knows no bounds in the abortion industry.

• Fewer poor people will be helped this year, thanks to the grinches at one of the Christophobic groups that runs around our country looking to abolish any remaining vestiges of our Judeo-Christian heritage in public places. Onenewsnow.com (of the American Family Association) writes: "The Freedom from Religion Foundation (FFRF) put an early end to Liberty Middle School’s Operation Christmas Child program – a project organized by Samaritan’s Purse that allowed students at the school fill shoeboxes with Christmas gifts for underprivileged children living in oppressed and embattled nations around the world." Well done, FFRF. You successfully protected innumerable poor children from receiving Christmas cheer this year.

A great contrast to these anti-Christmas sentiments can be found in the words and actions of many of this nation's founders and leaders.

Just take one example. John Jay was a key founding father. He wrote some of the Federalist Papers, and he served as the nation’s first Chief Justice. He gave a Christmas address before his fellow representatives of the state of New York in 1776, in which he mentioned God and faith 33 times. For instance, he said, "And we should still have enjoyed the blessings of peace and plenty, if we had not forgotten the source from which these blessings flowed; and permitted our country to be contaminated by the many shameful vices which have prevailed among us."

Ultimately, C. S. Lewis's novel is a beautiful Christian allegory showing how Jesus Christ has come into the world to undo the works of the Devil. Thank God for Jesus. Otherwise, it would be always winter, but never Christmas.

Jerry Newcombe, D.Min., is the executive director of the Providence Forum, an outreach of D. James Kennedy Ministries, where Jerry also serves as senior producer and an on-air host. He has written/co-written 33 books, including George Washington’s Sacred Fire (with Providence Forum founder Peter Lillback, Ph.D.) and What If Jesus Had Never Been Born? (with D. James Kennedy, Ph.D.). www.djkm.org    @newcombejerry      www.jerrynewcombe.com