The Effort to Add God to the WWII Memorial

Jerry Newcombe
|
Posted: Jun 12, 2019 4:15 PM
Share   Tweet
The opinions expressed by columnists are their own and do not necessarily represent the views of Townhall.com. 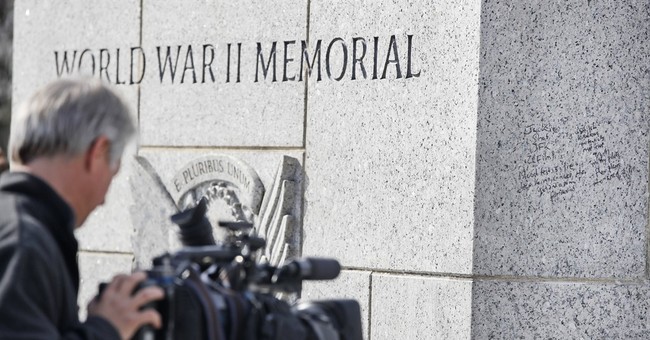 Now that the dust has settled from the 75th anniversary of the D-Day invasion, it’s interesting to reflect on a piece of unfinished business related to our remembrance of that historic event.

Presumably in a nod to the political correctness that currently blinds this nation, the World War II Memorial unveiled in 2004 noticeably left out any mention of thanksgiving to the Lord for His aid. Yet President Franklin D. Roosevelt repeatedly called on God’s help in the conflict. William J. Federer, the bestselling author and speaker, documents this in his book, The Faith of FDR.

In a recent radio interview, Bill Federer told me, “The World War II Memorial has absolutely no mention of God. And those that fought in the war were men and women of faith,” who are often disappointed by this omission, as they come and visit the memorial.

Federer also noted: “I read through all [FDR’s] public addresses, and I was shocked at how many times he mentioned Christianity and the Bible.”

Here is a small sample of things Roosevelt said in his speeches:

•“I know that there is not room enough on earth for both German militarism and Christian decency.” (3/1/45)

• “The world is too small...for both Hitler and God...the Nazis have now announced their plan for enforcing their...pagan religion all over the world---a plan by which the Holy Bible and the Cross of Mercy would be displaced by Mein Kampf and the swastika.” (State of the Union Address, 1/6/42)

•In a radio prayer heard live by most Americans: “With Thy blessing, we shall prevail over the unholy forces of our enemies.” (“D-Day Prayer,” 6/5/44)

Perhaps the biggest omission of God at the WW II Memorial is any mention of the FDR’s “D-Day Prayer,” from which that last quote comes. It is estimated that 100 million Americans (out of a population of 138 million) tuned into that radio broadcast the evening of the largest military invasion in history.

Here are portions of what FDR prayed that night:

“Almighty God: Our sons, pride of our Nation, this day have set upon a mighty endeavor, a struggle to preserve our Republic, our religion, and our civilization, and to set free a suffering humanity.

“Lead them straight and true; give strength to their arms, stoutness to their hearts, steadfastness in their faith….

“Some will never return. Embrace these, Father, and receive them, Thy heroic servants, into Thy kingdom….

“Many people have urged that I call the Nation into a single day of special prayer. But because the road is long and the desire is great, I ask that our people devote themselves in a continuance of prayer….

“Help us to conquer the apostles of greed and racial arrogancies. Lead us to the saving of our country, and with our sister Nations into a world unity that will spell a sure peace a peace invulnerable to the schemings of unworthy men. And a peace that will let all of men live in freedom, reaping the just rewards of their honest toil.

“Thy will be done, Almighty God. Amen."

The “racial arrogancies” no doubt refers to the Nazi plan to create the Master Race, to speed up evolution, to remove from the earth those deemed of inferior stock---the Jews, Gypsies, Slavs, etc. The first group killed in the gas chambers were about 200,000 handicapped people, including World War I veterans with severe wounds.

In 2014, Congress passed and President Obama signed into law a bill to add the complete text of the FDR D-Day Prayer to the World War II Memorial. The only catch is that this legislation will expire within the next year, and the project is still “under development.”

Bill Federer and Chris Long, president of the Ohio Christian Alliance, who has been spear-heading this effort, are raising private donations for this cause. More information can be learned at www.ddayprayerproject.org

Federer told CBN News last week: “You go to Normandy, what do you see? Crosses – 9,000 of them – and Stars of David. These were men and women of faith. And so it’s only proper that there should be some acknowledgment of faith at the World War II Memorial in Washington D.C.”

In an age of political correctness run amok, the D-Day Prayer Project is a worthwhile goal to help us get over what I call our “American Amnesia”---where we continue to forget God, despite all His help. As FDR observed, “If the spirit of God is not in us, and if we will not prepare to give all that we have and all that we are to preserve Christian civilization in our land, we shall go to destruction.” (Speech at the Great Smoky Mountains National Park, September 2, 1940)