Why Did Robert E. Lee Serve the Wrong Side? 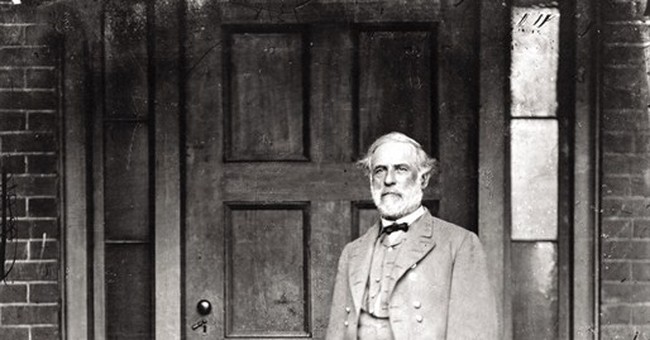 A new book on Lee is a great read. It’s called -- The Man Who Would Not Be Washington: Robert E. Lee’s Civil War and His Decision that Changed American History.

The book is by Jonathan Horn, a former presidential speechwriter for George W. Bush.

Although I thought I knew many things about Lee, I learned much more through the book. It’s the kind of book that keeps you up at night. Interestingly, Robert E. Lee has been described as “the marble man,” noble and unyielding like a statue. This book certainly shows the marble man had feet of clay.

I enjoyed having Horn on my radio show recently. He clarified the point that the “civil war” referred to in the subtitle was Lee’s own conflict, his personal civil war if you will, as to which side to serve.

While Lee viewed secession with horror and the union with honor, he ultimately asked, “How can I draw my sword upon Virginia, my native state?” He could not. Once Virginia chose to secede from the Union in 1861, with it went Robert E. Lee.

Lee is an interesting man because he was seemingly a man of contradictions. Because of legal obligations, he freed the slaves he and his wife inherited from her father before the Emancipation Proclamation. As a Christian, he hated slavery, yet he ended up fighting essentially for its continuance.

He favored the Union, yet he chose to apply his incredible military skill to the side that was dissolving the Union.

If he had been born just a few miles north, we possibly could have had President Robert E. Lee. But he wasn’t, and we didn’t. Ironically, as Horn points out, President Grant once hosted his former nemesis to a short social meeting in the White House several years after the war.

One friend of mine said years ago that Robert E. Lee had more character in his little pinky than most men have in their whole bodies.

How then could he have chosen to serve the South?

If God led him, and I think this book amply shows that once Lee was converted he tried to deny himself and to do what he understood the Lord wanted him to do, how then could he have been the ultimate leader of the armies of the Confederacy?

My personal answer to this spiritual question comes from President Lincoln, who greatly and rightly feared Robert E. Lee. He stated that it was possible that the war was God’s judgment on a nation that had neglected Him and knowingly engaged in disobedience.

The month before Lee’s surrender, Lincoln delivered his Second Inaugural Address, which Professor Daniel Dreisbach has noted has 45 biblical allusions, references or quotes. It’s a terrific speech and is only about 700 words.

Said Lincoln: “Fondly do we hope--fervently do we pray--that this mighty scourge of war may speedily pass away. Yet, if God wills that it continue until all the wealth piled by the bondsman's two hundred and fifty years of unrequited toil shall be sunk, and until every drop of blood drawn by the lash shall be paid by another drawn with the sword, as was said three thousand years ago, so still it must be said, ‘The judgments of the Lord are true and righteous altogether.’"

Gary Bauer (End of Day, 4/16/15) summarizes Lincoln’s point: “Slavery was a violation of America's promise that all are created equal. Lincoln worried that the Civil War would last until God had extracted as much blood from the North and the South as had the slave master's lash.”

If Lincoln’s speculation is correct, what does that say about our nation today? One shudders. Just take one notable example---abortion. We have killed more than 55 million unborn babies in the name of “choice.” What choice did those babies have---or in many cases, even the mothers themselves?

Jefferson once said, “I tremble for my country when I reflect that God is just; that his justice cannot sleep forever.”

History has some sobering lessons for a wayward nation. Perhaps Robert E. Lee was essentially a sword in the hands of the Lord to punish a country that should have known better. Quoting Lincoln again, “With malice toward none, with charity for all, with firmness in the right as God gives us to see the right,” may God help us today to get back on the right track.