Au Contraire, Jim DeMint Does Know His US History 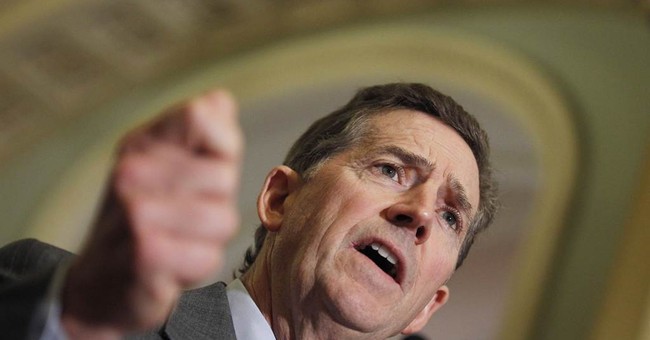 Recently, I interviewed Jim DeMint for my radio show to discuss his new book, Falling In Love With America Again. Some remarks he made on the show, especially about slavery, have been burning up the blogosphere. Many of the articles imply or state that Mr. DeMint, former US Senator (R-SC) and now head of The Heritage Foundation, doesn’t know his US history.

In the interview, I asked DeMint about the founding fathers, the Civil War, and slavery. He said: “Well the reason that the slaves were eventually freed was the Constitution, it was like the conscience of the American people. Unfortunately there were some court decisions like Dred Scott and others that defined some people as property, but the Constitution kept calling us back to ‘all men are created equal and we have inalienable rights’ in the minds of God.”

DeMint continued , with what became his most controversial remarks in the interview: “But a lot of the move to free the slaves came from the people, it did not come from the federal government. It came from a growing movement among the people, particularly people of faith, that this was wrong. People like Wilberforce who persisted for years because of his faith and because of his love for people. So no liberal is going to win a debate that big government freed the slaves. In fact, it was Abraham Lincoln, the very first Republican, who took this on as a cause and a lot of it was based on a love in his heart that comes from God.”

The DailyKos declared: “Note to Jim DeMint: Ending slavery was a Big Government police action.” One blog from MSNBC said of Mr. DeMint: “Don’t Know Much About History.” But just who doesn’t know much about history?

Let’s unpack what he said here and look at faith and slavery, proving DeMint’s key points.

The Bible condones indentured servitude to pay off debts (which has a limited time of service), for which it sometimes uses the word “slavery.” But the Bible condemns chattel slavery (owning slaves as property) in strong terms. The Bible condemns the Egyptians for enslaving the Hebrews. And it prohibits “man-stealing” (the premise of US slavery) as a capital crime.

Paul preached the radical doctrine that the slave and the free man are brothers in Christ…and that Philemon would be a better Christian if he freed his slave.

Above all, the great historian Kenneth Scott Latourette (1884-1968) of Yale points out that over the centuries Christianity undermined slavery by dignifying labor.

William Wilberforce was a longtime Member of Parliament in England who engaged in a lifelong Christian crusade against the slave trade and slavery in the British Empire. Even President Obama (not a DeMint fan, I imagine) noted in 2010: “Remember William Wilberforce, whose Christian faith led him to seek slavery's abolition in Britain…"

The success of Wilberforce and his evangelical friends who ended slavery in 1833 inspired those in America dealing with the terrible issue here.

In the American experience, two-thirds of the members of the abolition society in 1835 were ministers of the gospel. Leading practitioners of the Underground Railroad were Quakers. The Christian novel Uncle Tom’s Cabin pricked the conscience of the nation. Abraham Lincoln’s love of the Bible is well-documented; his writings are filled with quotes from its pages.

One of the articles critiquing Jim DeMint’s American history was by Jon Greenberg and posted at Tampa Bay Times / PolitFact.com (4/15/14). In his nevertheless-thoughtful piece, Greenberg notes: “…the majority of the leaders of the American Anti-Slavery Society, a powerful voice for emancipation in the decades before the war, identified with some branch of faith. They drew their inspiration from the Bible.”

He goes on to quote Christian abolitionist Jonathan Blanchard. (On a personal note: Blanchard was the founder/first president of evangelical Wheaton College, where I met my wife and earned my M.A.)

Said Mr. Blanchard: "Abolitionists take their stand upon the New Testament doctrine of the natural equity of man." Blanchard then cites Acts 17:26, which says that all men came from one man---thus, undermining racism. (Not that Christians have always lived up to that ideal, sadly).

It’s true that some in the South misused the Bible to justify American chattel slavery. But, most importantly, the death knell against slavery came from the Bible. And that’s the key, proving DeMint’s thesis. As culture precedes politics, so abolitionism (often faith-based) among the people preceded the Civil War.