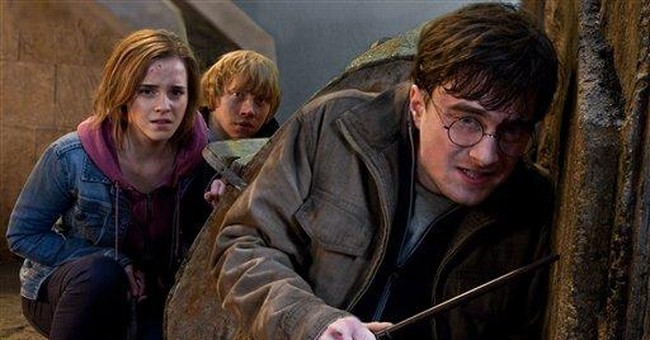 Lynn Shepherd is a crime novelist whose novels, as of this writing, tend to rank just beneath the top 100,000 in Amazons ranking of sales. J.K. Rowling is one the most financially successful writers in history: the first woman in history to make a billion dollars on her craft, based on the phenomenally successful Harry Potter series of youth novels. Rowling is also quite a successful author of novels for grown-ups. A Casual Vacancy, more than a year after its release, is ranked at 6,700 on Amazon, and her crime novel, The Cuckoo’s Calling, is ranked at roughly 600.

Lynn Shepherd doesn’t think that’s fair and has called upon Rowling to stop writing, at least to stop writing for grown-ups, in a column for the Huffington Post. According to Shepherd, Rowling has enough money already and enough fame. She doesn’t need more of either. Rowling is a publishing juggernaut and Shepherd thinks that her novels take up all the oxygen in the room, get all the attention, and crowd out other writers for scarce shelf-space, media, and public attention. Shepherd thinks that Rowling should quit so that the other writers can have some breathing space.

Not surprisingly, Shepherd’s comments section is flooded with hostile responses and her books’ pages on Amazon have been inundated with angry one-star reviews. It certainly didn’t help Shepherd’s case when she admitted that she’d never read Rowling’s books, nor even seen the films.

Readers of this periodical in particular are well prepared to answer Ms. Shepherd’s complaint. She suffers from zero-sum thinking. A kind of literary Malthusianism underlies her pathetic cry for relief, as though shelf space is limited and if some gorge, then others must starve. But of course, economic dynamics are such that the pie itself can grow: Say’s Law and all that. Supply creates demand. Supply-siders would rightly point out that Rowling didn’t just take a bigger piece of a static pie, she baked bigger pies. She created new readers… Heck, give the woman her full due: she created a whole new generation of new readers. And, no doubt, those new readers are the ones who crowded in to buy A Casual Vacancy and The Cuckoo’s Calling (once it was revealed that it was she who wrote the latter under a pseudonym). Don’t believe me? Then read all the comments on Amazon complaining that Vacancy is nothing like Potter.

So Shepherd’s wrong and Rowling’s right, right? Except that Rowling’s only right if zero-sum, labourite, semi-socialist Fabianism is wrong. The problem is that Rowling herself doesn’t believe that. If Rowling’s politics are right, then so is Shepherd. If the massive redistribution of wealth is a moral imperative, then how can Rowling and any of her readers who are fellow political travelers argue that redistribution of market share, shelf space and fame are not? After all, these things are sources of wealth. If the rich getting richer, income gaps, inequality, winner-taking-all, and all of that stuff really are problems, then Rowling is a great offender and an all-taker, if there ever was one, who has pushed inequality in publishing to new heights. She’s not top one percent; she’s top one percent of one percent.

Rowling gave one million pounds to the Labour Party under the disastrously left-wing Gordon Brown. Her ‘star-struck’ moments include meeting Barack Obama and Democratic speech-writer Bob Shrum. (Bob Shrum? Wow, she must be a true believer.)

A Casual Vacancy is a fine novel, but its left-wing sympathies are not exactly buried. Although her literary sensibilities shrink from crass white/black hat character sketches, the story is a political one and the Tories are the bad guys. The hero is Barry Fairbrother who dies at the beginning (not a spoiler, it’s on the book jacket). He is a man from what Americans would call ‘the projects’ who becomes a political and community activist and whose chief causes at the time of his death are an attempt to save the projects in which he was born from being fobbed off to another district, and to prevent an unpopular methadone clinic from being evicted. His death shifts the balance of power towards the Tories and, without giving things away, that’s not good. I enjoyed it, and it had many subtle moments and good points (and if there’s demand I’ll write a review), but it definitely preaches. Rowling has made clear in subsequent interviews that she sees a clear parallel between what went on in her fictional village of Pagford and what we now see in the Torie coalition currently.

This didn’t start with Vacancy, it was always there in Potter. My good friend John Granger (no relation to Hermione,) aka Hogwarts Professor, has pointed out that the loathsome Aunt Marge is a thinly concealed stand-in for Margaret Thatcher. Thatcher, of course, complained about too many people being ‘on the dole’ and Rowling herself started writing Potter while on that dole. So, Rowling gets her revenge by placing horrific racialist rhetoric in her Thatcher Avatar’s mouth, which isan act of even greater hostility than it would appear at first blush when the astute reader notices that Marge is first introduced in the same installment of the series which reveals Voldemort’s own Hitlerian ideology of racial supremacy. In other words, just as Aunt Marge is Voldemort-lite, so Thatcher is Hitler-lite. Not exactly subtle.

Granger has also pointed out Rowling’s tendency to name the heroic members of The Order of the Phoenix after Fabian Socialist leaders from early 20th Century British history.

Don’t get me wrong: I love Rowling. I think the Potter novels are masterpieces. I think her mistreatment by the religious right was nonsense on steroids: Rowling is a Christian whose writings are drenched in the Christian literary tradition and the Western canon. But I don’t require ideological affinity from my favorite artists–novel, film or musical. If I did, my shelves would be much emptier.

But if I can’t expect a writers’ view to be consistent with mine, can’t I at least ask that their views be consistent with theirs? If Rowling’s redistributionist, stagnationist, Old Labour (Order of the Phoenix shows utter contempt for New Labourite Tony Blair) politics are right, then Shepherd is right too and Rowling really should embrace fairness and give someone else a chance.