When Investing, Pay Close Attention To Country Over Company

Jerry Bowyer  |  Mar 02, 2013
The opinions expressed by columnists are their own and do not necessarily represent the views of Townhall.com.
Top Columns
Trending on Townhall Media

The stale old stock pickers’ debate about whether to bet on the right jockey or the right horse might leave out the most important long-term factor for building a diversified portfolio…you just might do better betting on the right track.

In other words, and for whatever reasons, it might be true that highest amount of value (best mix of return and risk) might come not from the choice of which CEO is in charge or which sector the company works in, but rather on the policy environment in which the companies are forced to operate.

Over time these differences in national policy add up to a very significant difference in stock market performance.

I asked a colleague of mine, Ted Lucas at Lattice Strategies, to run an experiment which looks at a well-diversified portfolio over the past 14 years (the time period during which a wide array of international country data is available) and to tell me how country selection performance stacked up against company selection performance.

He and his crack team (which includes not only financial analysts but also an astrophysicist named Kirsten) created a heuristic to test that hypothesis and what they found is extraordinary. 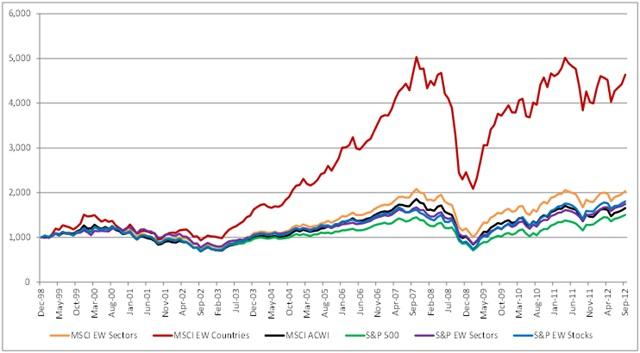 The equally weighted country index was the clear outlier, demonstrating that at least as far as this time period shows (the only one with comprehensive individual country data available), greater value would have been added (or potentially subtracted) by deviating from index country weights than by deviating from index sector or stock weights.  One thousand dollars invested in equal weightings of the country indices becomes almost five thousand dollars as of last fall, while the S&P would put you closer to fifteen hundred. Equal weighting of S&P stocks gets you closer to two thousand. The point is not to say that one or another of these investments will be better than another, but rather to say that the biggest divergence in return occurs in the simulation which varies the country mix away from the standard industry approach of capital weighting.

The evidence seems quite clear. Countries matter – a lot. We all intuitively understand that, which is why we fight so hard over the direction of our country. Stock analysts and market pundits may find this ground uncomfortable; they’ve devoted their lives to learning enormous amounts of information about American companies and developing at least a passing familiarity with the standard spectrum of American macro-economic statistics which are released each month. Those who are more informed than average even learn how to talk (and perhaps even to think) about the Fed and about various Congressional committees and regulatory bodies. Although they may have memorized a few acronyms like BRIC, and become generally aware of a few categories such as ‘emerging’ and ‘frontier’ markets, and lately learned  the names of a few of the players in the European debt crisis, aside from that, the world outside the U.S. is pretty much new ground for them.

But it is the world and we’d all better start paying attention to it.

Mr. Bowyer is the author of "The Free Market Capitalists Survival Guide," published by HarperCollins, and a columnist for Forbes.com.