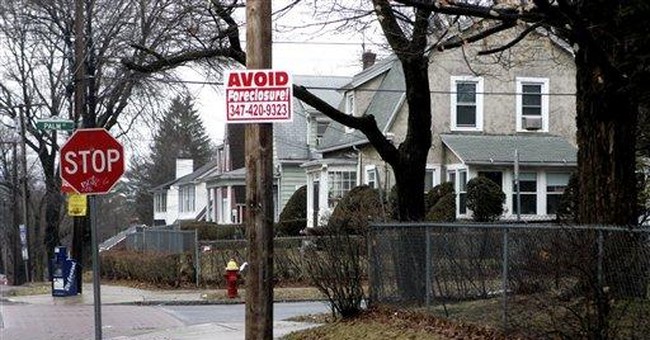 Last Saturday, I was a guest on Larry Kudlow’s WABC radio program. Larry’s a good friend and we have been talking quite a bit lately on his TV and radio shows about the ways in which Federal regulations have created the sub-prime mortgage crisis. This is far and away the most underreported aspect of the mortgage story, and aside from Larry’s shows and a few conservative media outlets, such as Townhall, it has been completely missing from the discussion.

That’s a shame, because there simply was no such thing as a developed Subprime mortgage industry until the US congress created it by ordering banks to issue loans to people who were not credit worthy. Community activist groups (such as the Public Interest Research Group and Acorn) and civil rights law firms (such as Miner, Barnhill & Galland) had make their living by accusing banks of racism when the banks hesitated to approve loan requests from minority citizens with poor credit scores. Fair Housing laws, championed by American Heros like Martin Luther King, Jr., had long-ago outlawed the practice of ‘redlining’, which is refusing to sell or rent to blacks in certain neighborhoods. But a new generation of activists modified the concept of redlining, applying it not just to race-based home sale covenants, but to any refusal to lend to a minority member, even for sensible financial reasons.

The Community Reinvestment Act was created as a result. Initially the act was used, not to get banks to lend to minority households, but to get them to cut checks to ‘community groups’. Left of center activist agencies, which had pushed for the act in the first place, used it as a shakedown tool. So long as the banks kept paying off to the activists, the activists would hold off on sending complaints to the bank regulators’ CRA files.

Eventually, under Clinton, the CRA was renewed and, not surprisingly, made more punitive. Banks were required to make Subprime mortgage loans now too, or else suffer a low CRA rating and be punished accordingly. The Fed played it’s part. The Home Mortgage Disclosure rules created an unfunded mandate for banks to track and publicly disclose the race and gender of it’s mortgage clients. Now the shakedown artists had an easy source of complaints and a club with which to beat the banks into submission. The bankers complied and the Subprime mortgagage market was born.

But the bad paper remained principally on the balance sheets of the originating banks for a couple of years. The banks and their shareholders were directly hurt, but not the general public, at least in the beginning, that is until the bank regulators once again intervened and encouraged banks to push the paper out to unsuspecting investors.

First the Fed issued guidance which warned the banks that their capital requirements would be severely raised in response to the Subprime mortgages. In other words, banks were told that to the extent that they issued mortgages to high risk borrowers, to that extent they would not be allowed to put as much of their money into income-producing activities. The banks had already been told by the Fed that they would have to set aside more money for mortgages in general, and now they were being hit again for the Subprime variety.

Second, the Fed issued guidance on how to mix Subprime mortgage paper in with good paper and sell the resulting composite security to the general market. This is how the ‘toxic waste’ of bad debt was pumped out into the world. This is why credit markets are now having trouble clearing. This is why banks are taking massive write-downs of the loans which still exist on their books. This is why foreign investors don’t want to buy US mortgages, or bank stocks, and consequently don’t want to buy the dollars in which they are denominated either. If you add to this a Security and Exchange Commission ruling which compels banks to ‘mark to market’, which means they are forced to show large losses in times of market panic, you give a legal mandate for short-term thinking. You create a more serious crisis for the system and a fatal blow to the weaker banks.