Making America Great Again: We do not Negotiate with Terrorists

Jeremiah Cuevas
|
Posted: Feb 28, 2016 12:01 AM
Share   Tweet
The opinions expressed by columnists are their own and do not necessarily represent the views of Townhall.com. 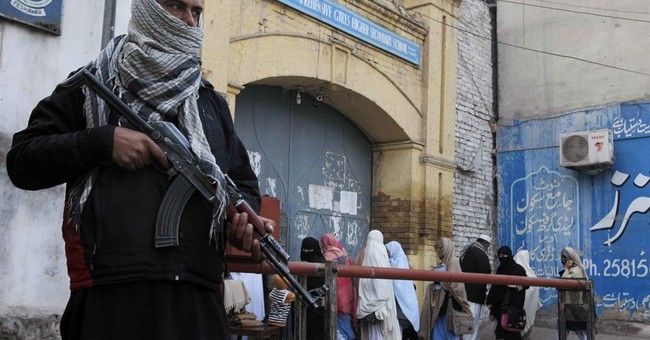 "We are going to make America great again! I make deals, I'm a deal maker." These are the words that Americans have heard from the mouth of Donald Trump over and over and over again. In Thursday night's debate they echoed yet again. In another debate in South Carolina last month, Trump made the statement that 911 was George W. Bush's fault to project weakness the former President, and by extension onto his brother and then fellow GOP candidate, Jeb Bush. However, in Thursday night's debateMarco Rubio alluded to something about Trump's affinity for deal making that is at odds with his political aspirations, and exposes his own weakness.

Inthe debate in Texas we saw a totally new Sen. Rubio. Although his competitor Sen. Ted Cruz has been going after Trump for quite sometime, Rubio had basically been going after the other candidates, that was until Thursday night. In one exchange in particular, that may have been overlooked by many,Mr. Trump was talking about how he would broker peace in the Middle East between the Israelis and Palestinians by taking a neutralposition in the region.

Donald Trump said "I would not take sides. It would perhaps be the toughest dealof my life."

"Have you ever made deals with Terrorists?" Rubio interrupted.

Marco Rubio was pointing out a huge chink in Trump'sarmor. In that one statement Donald Trump goes against two huge cornerstones of the Republican Party and American conservatism in general. The Republican party is based on the restoration of the founding principles of equal right under the law for all people and Christian ethics. Although being a Christianis not a requisite of being member of the Republican Party, there is long standing tradition of standing with Israel. This is not simply because of the Christian tradition of blessing Israel as the Bible instructs. The other reason for standing Israel is that we have a common enemy.

On September 11, 2001 the nation was attacked resulting in the deaths of thousands of Americans. After that day, then President George W. Bush drew a line in the sand. The President went in front of congress and made a list of demands to the terrorist after 9/11. Thus the beginning of the modern war on terror, and radical Islam as a whole.

Donald Trump has built a political career, all be it a short one, ofcontradicting himself. However this contradiction may be the worst of them all. After 9/11 when George W. Bush drew that line in the sand; the words "We do not negotiate with terrorists" became part of the DNA of America's foreign policy. He promised to bring all the military might to bear oncombating terrorism.

All the GOP candidates to include Donald Trump, have stressed the importance of scrapping the Iran Deal. The Obama administration has proclaimed that the Iran Deal as a win for America. Trump has said on many occasions how horrible the Iran Deal was bad for America, and that he would be "tougher on terrorism than anybody." However, to say that you would not take sides in the Middle East you are inviting terrorist to gain strength within their region and in turn perpetrate further acts of terrorism here in the United States.

Since the beginning of his candidacy Donald Trump has claimed beto the toughest guy in the GOP field, calling other guys wimps, liars, and choke artists. Other candidates have said "we need to put troops in a position to win" and "we willcarpet bomb ISIS." In contrastTrump is saying that he would not take sides and that he would negotiate with terrorists. Trump's position now does not soundlike that of a future president. In fact, those sentiments sound more like the current president of the United States, and we all know how that is turning out.

Making America great again can not be done by one man. America is in need of strong leadership, new leadership that does not kiss the ring of our enemies like Obama does. However, projecting American strength is more than tough talk, and vague bravado. We need a deliberate, and tactical leader. American might is in the heart of every American, and pools behind every man and women who stands in her service.
Thank you for your time.

Joe Manchin Is the Grim Reaper for Most of the Left's Agenda Items...And He Just Killed Another One
Townhall
Ana Navarro '[suspects] every Black woman and Latina' knows what she means when she says that Kyrsten Sinema's denim vest is racist
Twitchy
Ilhan Omar, Eric Swalwell Pick Nasty Fight With Ted Cruz, but Cruz Finishes It — and Them
Redstate
Aging Hippies Ruin a Wedding Officiated by Sinema Because That's What Commies Do
PJ Media