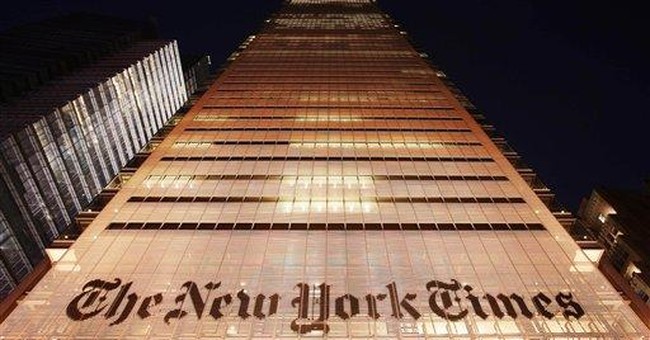 When journalists give an award to one of their own, you’d think they’d honor reporting that rises above that of others in journalistic quality. But that isn’t what happened when The Deadline Club, the New York branch of the Society for Professional Journalists, gave its Daniel Pearl Award for Investigative Reporting to The New York Times’ Charles Duhigg. Duhigg was the author of the series “Toxic Waters.”

Bestowing that award on Duhigg should be an affront to the memory of Daniel Pearl, who lost his life investigating Islamic terrorists in the heart of darkness. Duhigg, on the other hand, echoed the campaign of radical environmental groups seeking to scare people about the safe use of pesticides. These groups aren’t true environmentalists, but instead try to instill fear in anyone who eats produce, drinks water, or breaths air.

Duhigg’s reign of toxic terror focused on alleged dangers in drinking water. Consider the headline from the Aug. 22, 2009 installment of his series, “Debating How Much Weed Killer Is Safe in Your Water Glass.” The award-winning journalist allowed himself to be used as a pawn in a campaign against a long-used and important agricultural chemical, atrazine. That levels of atrazine in drinking water are barely measurable didn’t deter him.

“Recent studies suggest that, even at concentrations meeting current federal standards, the chemical may be associated with birth defects, low birth weights and menstrual problems,” Duhigg wrote. Especially in the Midwest, he found some spikes of atrazine concentration above the regulatory limit.

Duhigg also noted implied and overt allegations of reproductive abnormalities. However, those data come from frog studies that have been roundly dismissed by the scientific bodies that have objectively reviewed them, including the Environmental Protection Agency – no fan of industry. And the federal guidelines, which limit the annual level of pesticide contamination, not the occasional spikes, were in fact not violated.

The fact is atrazine has been safely and extensively used for more than 50 years to increase corn yields and reduce the need for other pesticides.

In other reports, Duhigg parsed local municipal water system records for evidence of malfeasance, chicanery, and greed in the monitoring of water systems nationwide. He was helped in his onerous endeavor by the stalwarts at the Natural Resource Defense Council, a well-known anti-chemical, anti-business activist group, best know heretofore for promulgating (with the crucial assistance of CBS News) the great Alar scare of 1989. The NRDC helped to gather damning evidence of water contamination.

The reporter and the activists did indeed find widespread evidence of lax regulation and less-than-ideal adherence to numerous regulatory strictures, with occasional spikes in the concentration of various pollutants and chemicals nationwide. But they found nothing that would impact human health.

This pattern was repeated over the course of the “Toxic Waters” series, with plentiful notations of briefly spiking pollution levels, but few of sufficient intensity or duration to warrant regulatory intervention. Duhigg attacked the EPA repeatedly for giving waterborne chemicals too easy a pass. But atrazine, for one example, has been evaluated rigorously by numerous scientific and regulatory bodies, including the EPA, and has been found to not even be a potential health hazard.

At the series’ conclusion, an objective outsider’s appraisal would have detected numerous “concerns” but no actual instances of human health impact from all the alleged violations. No surprise there; trace levels of chemicals are to be expected in our water (and air and food).

Why should we care about occasionally elevated levels of atrazine in the water? We shouldn’t. Journalists should win investigative reporting awards for digging deeper than an activist press release. They should ask, who are these groups? Have their allegations been accurate in the past? Or are they just Alar-esque scares? Duhigg, the investigative journalist, didn’t bother to ask.

The award dinner’s keynote speaker, Wall Street Journal Managing Editor Robert Thompson, lamented the rise of “traffic for the sake of traffic” and “purposeless repurposing” rather than serious journalism. His insightful criticism applied well to the series they were gathered to praise.

Maybe next year The Deadline Club can find some real investigative journalism to honor.