Leave Adoption Out of the Culture Wars

Jeff Jacoby
|
Posted: Nov 06, 2019 2:58 PM
Share   Tweet
The opinions expressed by columnists are their own and do not necessarily represent the views of Townhall.com. 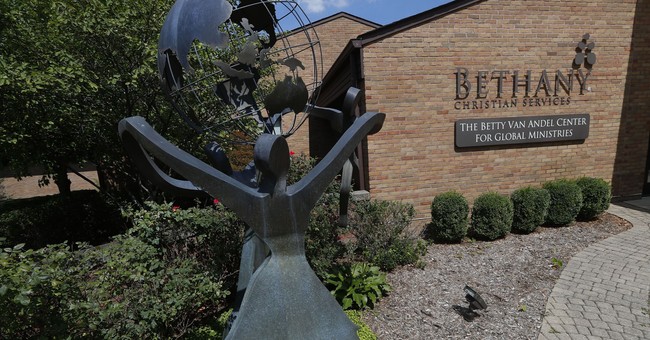 November is National Adoption Month, so it is fitting that the Trump administration has just taken a step that will make it a little easier to find permanent homes for children who need them.

On Friday, the Department of Health and Human Services announced plans to roll back a regulation that for three years has discriminated against traditional Christian adoption and foster care agencies. The regulation — imposed during the final days of Barack Obama's presidency — decreed that agencies providing child-welfare services could not receive federal grants if they were unwilling to place children with same-sex couples. That was a blow to adoption providers with a strong conviction that vulnerable children do best when they are adopted by families with a married mother and father. It was also a restriction never mandated by Congress: Federal civil rights laws prohibit discrimination on numerous grounds — race, color, national origin, sex, religion, and so on. But no federal statute has ever made sexual orientation a protected class.

The White House said over the weekend that undoing the Obama-era rule would mean that faith-based agencies would no longer be forced "to choose between helping children and their faith." Liberal journalists and activist groups snorted at this; the Human Rights Campaign issued a statement blasting what it called an "unconscionable" ploy "to justify discrimination against LGBTQ people and other communities."

But in contemporary America, legal discrimination against same-sex couples seeking to adopt or foster children is a nonissue. Gay and lesbian couples readily adopt children in all 50 states. The Williams Institute at UCLA Law School calculated in 2013 that there were 16,000 same-sex couples raising more than 22,000 adopted children nationwide — and that the highest rates of child-rearing by same-sex couples was not in left-wing coastal enclaves, but in such red-America bastions as Mississippi, Wyoming, Alaska, Idaho, and Montana.

By contrast, traditional faith-based adoption providers have suffered legal discrimination. In some cases, official hostility toward those with a policy of placing children only with a married mother and father has proved so implacable that even agencies renowned for being able to find "forever homes" for troubled children have had to shut down.

When Massachusetts decreed in 2006 that adoption agencies could no longer discriminate on the basis of sexual orientation, the state's most venerable adoption provider — Catholic Charities of Massachusetts — was forced to end a service it had been providing for more than 100 years. In the years that followed, there was a sharp drop in the number of children successfully placed for adoption, while the number in foster care waiting to be adopted swelled.

When my wife and I wanted to adopt a child from another country, we chose an adoption agency with particular expertise at facilitating foreign adoptions. In similar fashion, other would-be adoptive parents may prefer to work with agencies grounded in normative religious teachings — just as some birth mothers may choose to place their children for adoption through providers that share their faith. A biological mother who makes the deeply personal decision to let her child be adopted can hardly be faulted for wanting to know that her little one will be raised in a religious home, or in one with a mom and a dad. And faith-based providers often excel at recruiting suitable adoptive parents from religious communities.

More than 400,000 American children are in foster care; 110,000 of them are legally free to be adopted. That's a huge population of kids in need. It should go without saying that the greater the diversity of qualified adoption agencies available to find good homes for them, the better. Just as there is room for providers with a proven history of facilitating adoption by same-sex couples, so too should there be room for providers committed to familiar religious values. All the more so since religious Americans are much more likely than the public at large to become adoptive parents. "While only 2 percent of all Americans have adopted," reports the Barna Group, a research institute that studies American religion, "this rises to 5 percent among practicing Christians."

Instead of trying to squeeze traditional Christian adoption providers out of existence, federal and state authorities should be doing everything they can to encourage more of them to thrive. Every credible adoption agency wants one thing above all — to find loving parents for children who need them, without having to violate the dictates of conscience or judgment. Let the culture wars rage on some other front. When it comes to matching kids with permanent families, a policy of pluralism and tolerance will do the most good.